REVIEW: American Horror Story – Season 8, Episode 4 “Could It Be… Satan?” 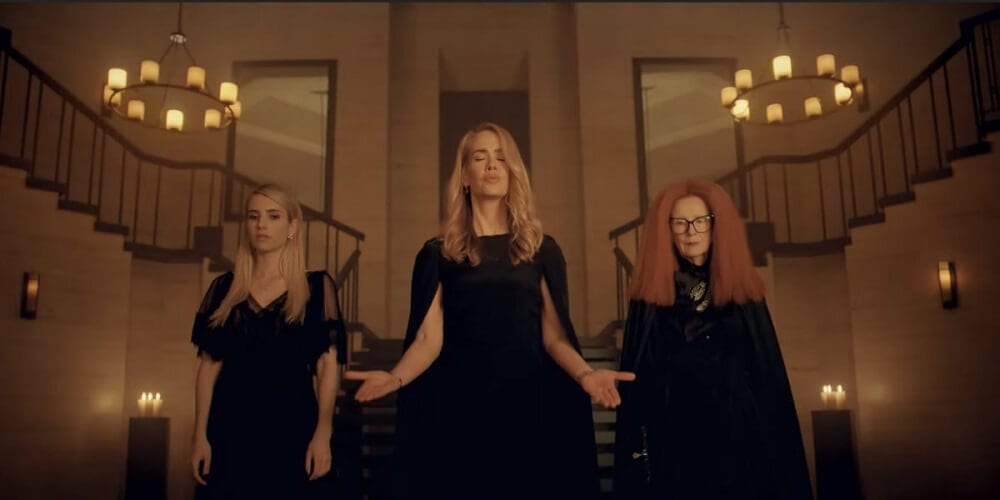 “For the first time I feel I know my place in the world: by your side.”

In “Could It Be… Satan?” Michael tells Mrs. Mead the story of the woman on whom she is based. Their tender moment is cut short when he senses that some of the inmates aren’t dead anymore. Cordelia offers the risen women the opportunity to join her and her Coven against Michael; Coco accepts, Mallory is too confused to respond, and Dinah insists on straddling the fence like she did on her TV show. Michael confronts them, and it’s a face-off between him and the witches. In a flashback taking place three years before the blast, we see the boys who used to attend school in the Outpost. Together they form a pile of shards into an orb. The faculty are called into the office to meet with Ariel, the school’s Grand Chancellor. He shows them a video of a man torturing a young boy and exploding. They all determine that the boy may be the Alpha Warlock, with the ability to perform the Seven Wonders and supplant the Supreme of the Witches Coven.

Ariel meets the boy in prison, and it turns out to be Michael. When asked how he got there, Michael tells a story about the original Mrs. Mead trying to buy a goat’s head from a butcher and the encounter going badly, ending in his using witchcraft on the butcher. The Grand Chancellor breaks Michael out and takes him to the school, where he’s introduced to the other boys. The faculty submit Michael to a series of tests such as turning water to snow and locating hidden objects, and he aces every one of them, far surpassing their expectations of his abilities. In another meeting, Ariel reveals that he believes Michael is the Alpha Warlock who can lead them to equality with the Witches.

The story cuts to Zoe teaching a group of young witches, and when Cordelia comes in Zoe encourages her to watch one in particular: Mallory. She transforms the rose’s color and then turns the petals into butterflies. Myrtle comes in and informs the two that they’ve been summoned to the Warlock school for an urgent meeting; once there, Ariel greets them with the news that Michael is surpassing expectations and he asks Cordelia to administer the test of the Seven Wonders. She declines, stating that she would be condemning Michael to his death. They confront Cordelia about the fate of Queenie, and she tells them that Queenie was trapped in the Hotel Cortez, and she was unable to get her out. 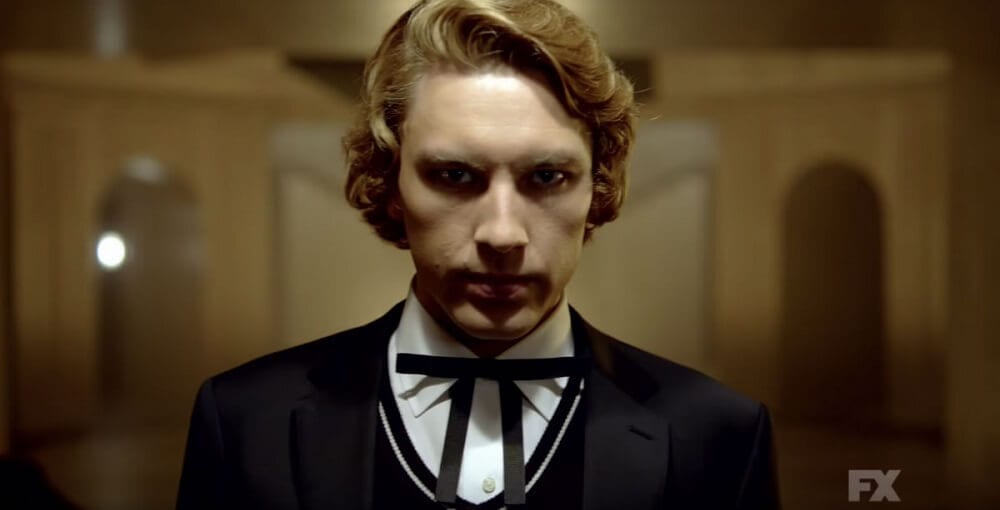 Ariel accuses Cordelia of being too afraid of the Alpha, motivating her reluctance to test him. Nonetheless, she and the Witches leave. Meanwhile, Michael is shown drawing a detailed sketch of the Cortez. He then goes there and confronts the ghost of March to free Queenie. Michael takes her hand, and March begins playing solitaire in her absence, apparently well aware that she won’t be coming back. We then see Madison in her own personal Hell, working retail and taking lip from the customers as well as her boss. Michael and Queenie arrive and break her out. As the Witches leave the boys’ school, they run into Michael and his rescues, the sight of which causes Cordelia to faint.

Wow. I was pretty sure they wouldn’t be able to top last week’s “Forbidden Fruit,” but I’d say they managed to blow it out of the water with “Could it be… Satan?” Usually, I can feel the time passing and I know roughly when to expect an episode to end, but this was so engrossing I was left shocked and wanting more when the credits rolled. As much as I’m enjoying this season, it’s worrying me like Westworld did in that it’s hard not to sound like a shill when something is so consistently good. As I mentioned in my “Forbidden Fruit” review, American Horror Story can sometimes lose its footing late into the season, and I really hope that doesn’t happen here.

“Could It Be… Satan?” is great in a number of ways. After the opening, I was surprised to see Mrs. Mead so underutilized in this episode, but it’s a great scene nonetheless. I do wonder how he got from his grandmother Constance Langdon to the woman Mrs. Mead is based on, but that’s likely something they’ll explain later. The shot of Michael when he senses the Witches’ presence is a great one, and you can tell exactly what he’s thinking by his expression. Cody Fern’s role as Michael couldn’t be farther from his role as David in American Crime Story: The Assassination of Gianni Versace.  While these are the only two shows I know him from, he’s excellent in both and clearly has decent range as an actor.  As an aside, Grand Chancellor Ariel is portrayed by Jon Jon Briones, who played Andrew’s father on The Assassination of Gianni Versace. 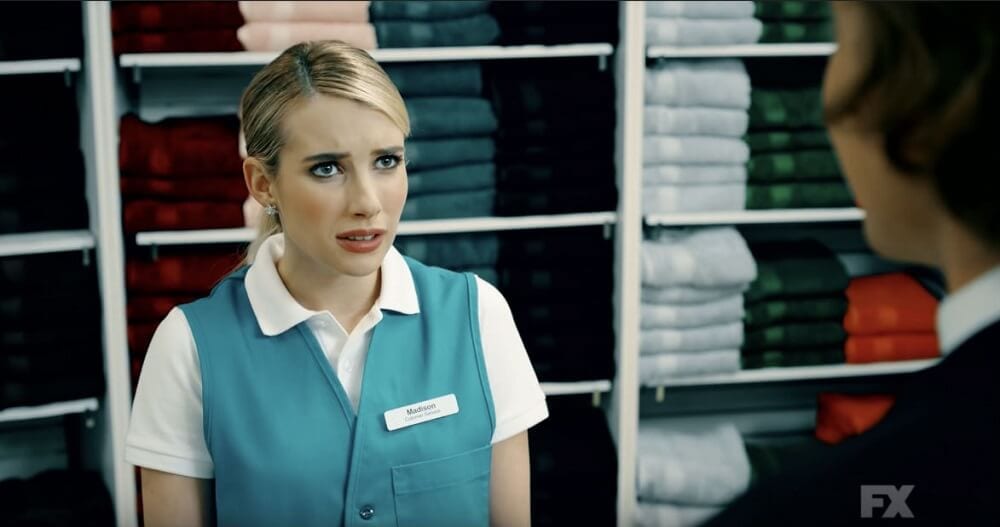 Although it’s a small moment, I enjoyed the interplay among Cordelia, Madison, Myrtle, Dinah, Coco and Mallory; it’ll be especially interesting to see how two self-absorbed divas like Madison and Coco will get along. I assume the next episode will focus on the showdown between Michael and Cordelia, as “Could It Be… Satan?” goes straight into backstory once they’re face-to-face. Apocalypse is shaping up to be more of a conventional good vs. evil story than AHS usually offers; while the concerns of the Warlocks are valid and one wonder why Witches would treat them as second-class citizens, Michael is clearly evil and training him to be the Alpha was a mistake on their part. Cordelia, on the other hand, is good at heart and would do anything for her Witches. Michael only saved Queenie and Madison to prove a point and show her up, specifically to challenge her position as Supreme.

The flashbacks in “Could It Be… Satan?” are excellent too, and it’s interesting to see both Zoe and Mallory with Cordelia in the Coven house. It made me wonder where Zoe is now, and why she isn’t with the others at the Outpost. I hope she’s OK because she was one of my favorites in Coven and it’s good to see Taissa Farmiga again. The pacing of all the reveals and returning characters is absolutely perfect this season; nothing has felt rushed or slapped-on at all. Each new piece of information adds to the anticipation of finding out what will happen next, and in the end. The whole backstory with the boy’s school gives off a bit of a Harry Potter vibe, and I mean that in the best way possible. There are a lot of moments in this episode that feel epic, such as Michael getting Queenie out of the Cortez, and Ariel’s proposition that Cordelia administer the Seven Wonders test to Michael. I can’t think of a single thing I didn’t like about “Could It Be… Satan?” and that’s pretty amazing.

Overall, “Could It Be… Satan?” is my favorite episode of Apocalypse so far, and one of my favorite episodes of American Horror Story period. It feels huge and important, with every reveal and flashback adding context to what we’ve already seen and what’s to come. Great performances – by Sarah Paulson and Cody Fern, in particular – boost the episode from entertaining to mesmerizing, and the end leaves the viewer with questions and excitement for the story’s continuation. I hate to say this about the newest season, but if they keep this up, Apocalypse has a good shot at becoming my favorite. Tying in plot and characters from Murder House, Coven and now Hotel could have gone horribly wrong and felt too much like fan service, but so far everything has been just right. “Could It Be… Satan?” is a great episode, and I look forward to seeing where the story goes from here.

American Horror Story - "Could It Be... Satan"?

“Could It Be...Satan?” is my favorite episode of Apocalypse so far, and one of my favorite episodes of American Horror Story period. It feels huge and important, with every reveal and flashback adding context to what we’ve already seen and what’s to come. Great performances – by Sarah Paulson and Cody Fern, in particular – boost the episode from entertaining to mesmerizing, and the end leaves the viewer with questions and excitement for the story’s continuation.