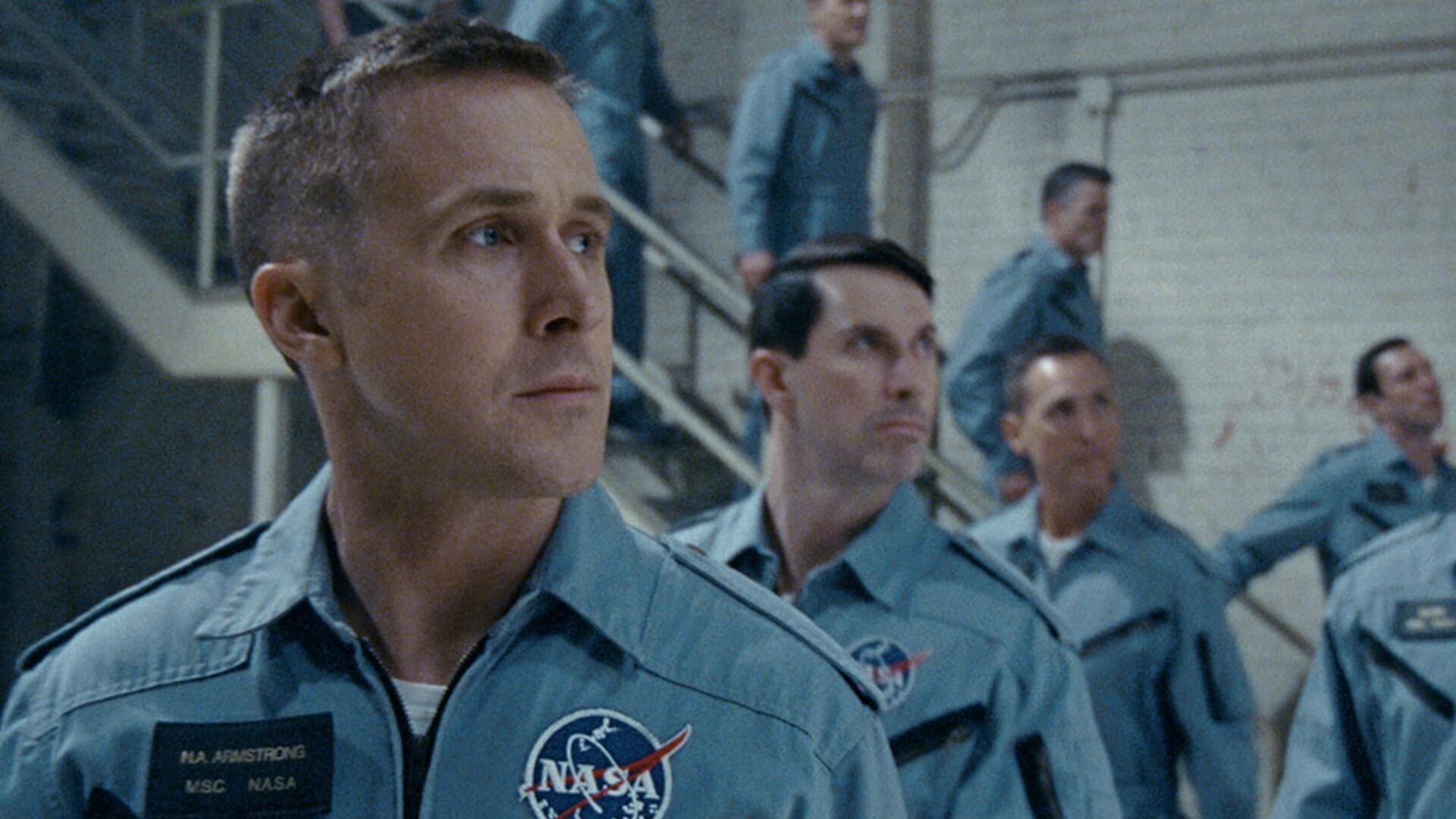 Based on a book of the same title by James R. Hansen, First Man tells the story of Neil Armstrong becoming the first man to walk on the moon. The film opens with Armstrong piloting a plane into the atmosphere in a rather intense scene, then quickly transitions into Neil’s home life with his family. Throughout the movie, Neil suffers several personal losses and struggles to maintain a normal family life while literally and figuratively shooting for the stars. Various tests and trips to space finally culminate in one of the most iconic moments in American and world history, and we see it all from Armstrong’s perspective.

Right after seeing a movie for the first time, especially in the cinema, it’s almost always difficult for me to decide how I feel about it. First Man is interesting because this was actually the case more so than usual; I had various thoughts throughout the film, and certainly had feelings about several of the characters, but I was left speechless by the abruptness of the ending and the starkness of the film as a whole. I went in genuinely unsure of what to expect, as I hadn’t seen any of the trailers or followed the film closely leading up to its release. In addition, I loved Damien Chazelle’s film Whiplash, but La La Land left a bad taste in my mouth.

Ryan Gosling is a talented actor, and I’ve never had anything against him, but similarly to Meryl Streep, he just seems to end up in a lot of movies I find boring or outright dislikable. He hits it out of the park as Neil Armstrong and manages to craft a very complex portrait of the man; I personally didn’t find him likable at all, and he’s likely not supposed to be, but you really do feel for him at various points in the film. Claire Foy plays Neil’s first wife Janet Armstrong, and she’s excellent here as well. I love her in The Crown and wasn’t aware she’d be in this film, so that was a pleasant surprise. She, of course, looks incredibly different here, and may not be recognized at first. Jason Clarke (Chappaquiddick), Shea Whigham (Boardwalk Empire), Corey Stoll (Ant-Man), Patrick Fugit, Christopher Abbott and Lukas Haas portray Armstrong’s fellow astronauts. Ciarán Hinds plays Robert Gilruth, one of the heads of NASA, and Kyle Chandler is head astronaut Deke Slayton. In short, Gosling has a fantastic supporting cast of character actors, and while the film focuses almost entirely on him, each brings something to their character. 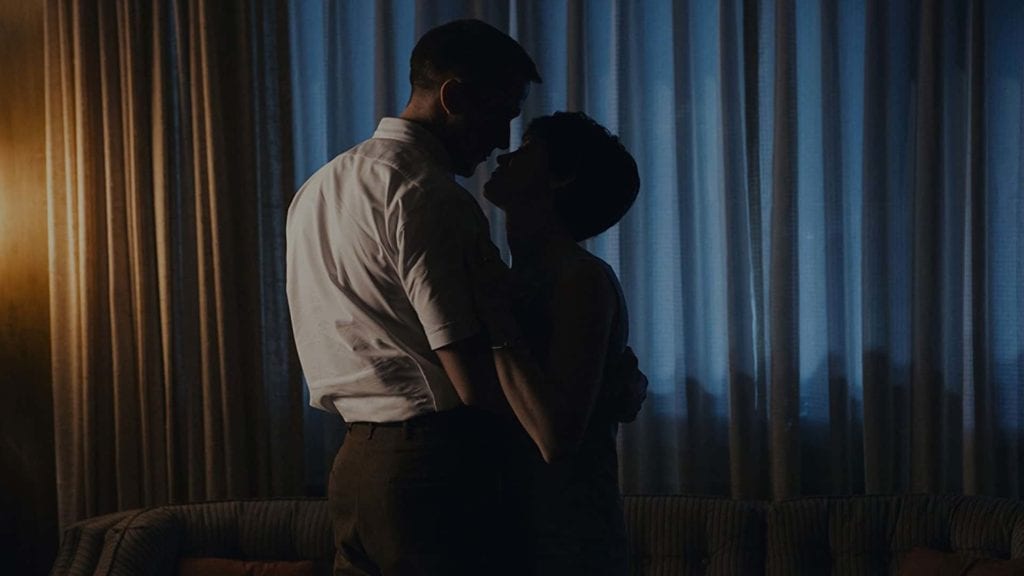 Clarke was another pleasant surprise, as I really enjoyed him in Chappaquiddick, and he gets a decent role here, even calling Neil out on his BS at times. He portrays astronaut Ed White, the first American to walk in space, who later died in the Apollo 1 incident. His demise is depicted in First Man, and what’s amazing is the amount of restraint shown; the scene is horrifying and has you on the edge of your seat, but it’s not grotesque at all. Even knowing what’s going to happen up front, you’re struck in the moment with anxiety over the characters and their fates. In fact, this film’s direction shows a lot of restraint in general, especially with Chazelle coming off the heels of La La Land, which was many things, but never subtle. First Man’s tone is distant, even sterile at times. This serves to accentuate Neil’s cold demeanor and make the audience feel as he might, and as his behavior makes his friends and family feel. This character is a real piece of work, regardless of how true to life he is. There are times when he is confronted by his wife or White, and I wanted to stand up and cheer because they are so right, and he’s so short-sighted and careless with the feelings of others. He expects his wife to deal with the children, even when it should be his responsibility, such as in telling them he’s going away. The way he treats people even when they’re trying to help and comfort him is shameful.

I didn’t know much about Armstrong outside of the simple fact that he was the first man to set foot on the moon, but based solely on Gosling’s performance I was left wondering if he may have been Autistic; a lot of his behavior reminded me of Asperger’s syndrome in particular. I may be projecting there a bit, and I don’t know how accurate the movie/book is to Neil’s real life and personality. But his awkward interactions and difficulties dealing with people brought that to the forefront of my mind, and the idea further humanizes him in my eyes. That being said, the main humanizing factor in the film’s text is the tragedy Neil’s family suffers in the beginning and the impact that it has on him, right up to the very end. This movie is interesting in that its tone is so somber. Normally when it comes to astronaut movies, I think of something like Apollo 13 that focuses on the uplifting mission of space travel and patriotism. First Man turns that idea completely on its head, leaving the viewer with questions and an uneasy feeling. It’s not quite as bleak as 2001 or Moon, but it’s no The Right Stuff either. 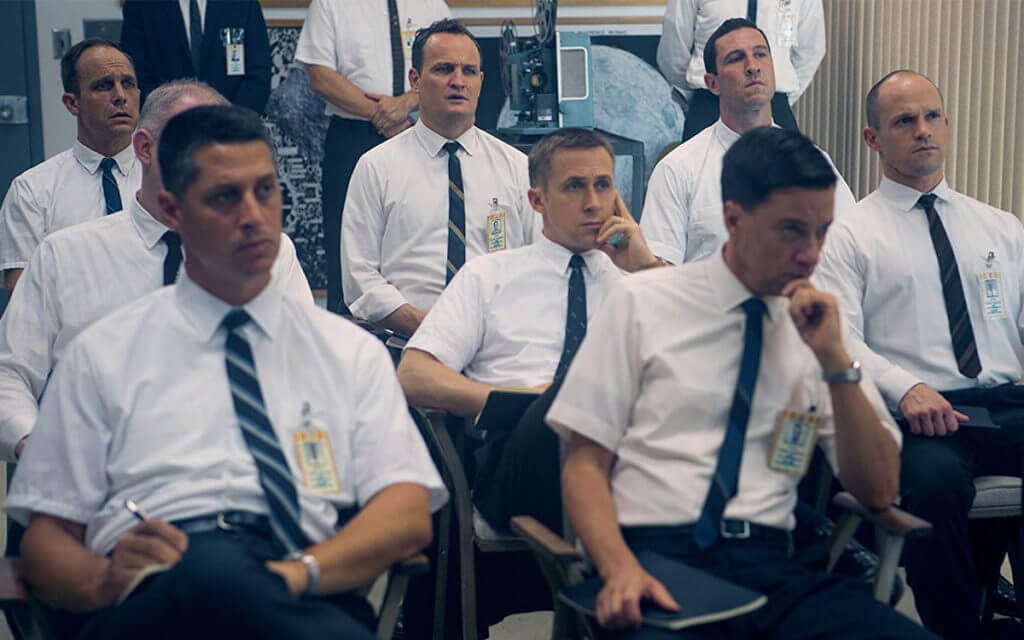 Technically speaking, First Man is pitch perfect. On Earth, the music, lighting and colors are all muted. I remember consciously thinking, “This is the least noticeable movie soundtrack in recent memory.” Everything is very somber and restrained, up until Apollo 11 enters space. All of a sudden there’s this explosion of beautiful music and bright light; suddenly, to me at least, the film made sense. They were saving that “wow factor,” that spectacle, for the big moment. The subtlety and silence throughout the movie serve as context and comparison to this big catharsis at the climax. If there’s a word for this, it’s genius. The music is provided by Justin Hurwitz, and at times it did remind me a bit of La La Land; it’s definitely its own score, but some of the flourishes and musical cues brought the earlier film to mind. That’s fine with me because the music is one aspect of La La Land with which I don’t find fault.

Overall, I really enjoyed First Man. Much like Chappaquiddick or The Post, this is a movie I wouldn’t have chosen to see without my husband being a history buff, but I’m really glad I did. At the end of First Man I was left stunned and didn’t know how to feel, but it’s clearly a competently made film that leaves the viewer with a lot to consider. The acting, direction, music and visuals are all excellent. Although I wanted to punch some of the characters in the face, I didn’t have any major technical issues with First Man and I would definitely recommend checking it out.

At the end of First Man I was left stunned and didn’t know how to feel, but it’s clearly a competently made film that leaves the viewer with a lot to consider. The acting, direction, music and visuals are all excellent. Although I wanted to punch some of the characters in the face, I didn’t have any major technical issues with First Man and I would definitely recommend checking it out.