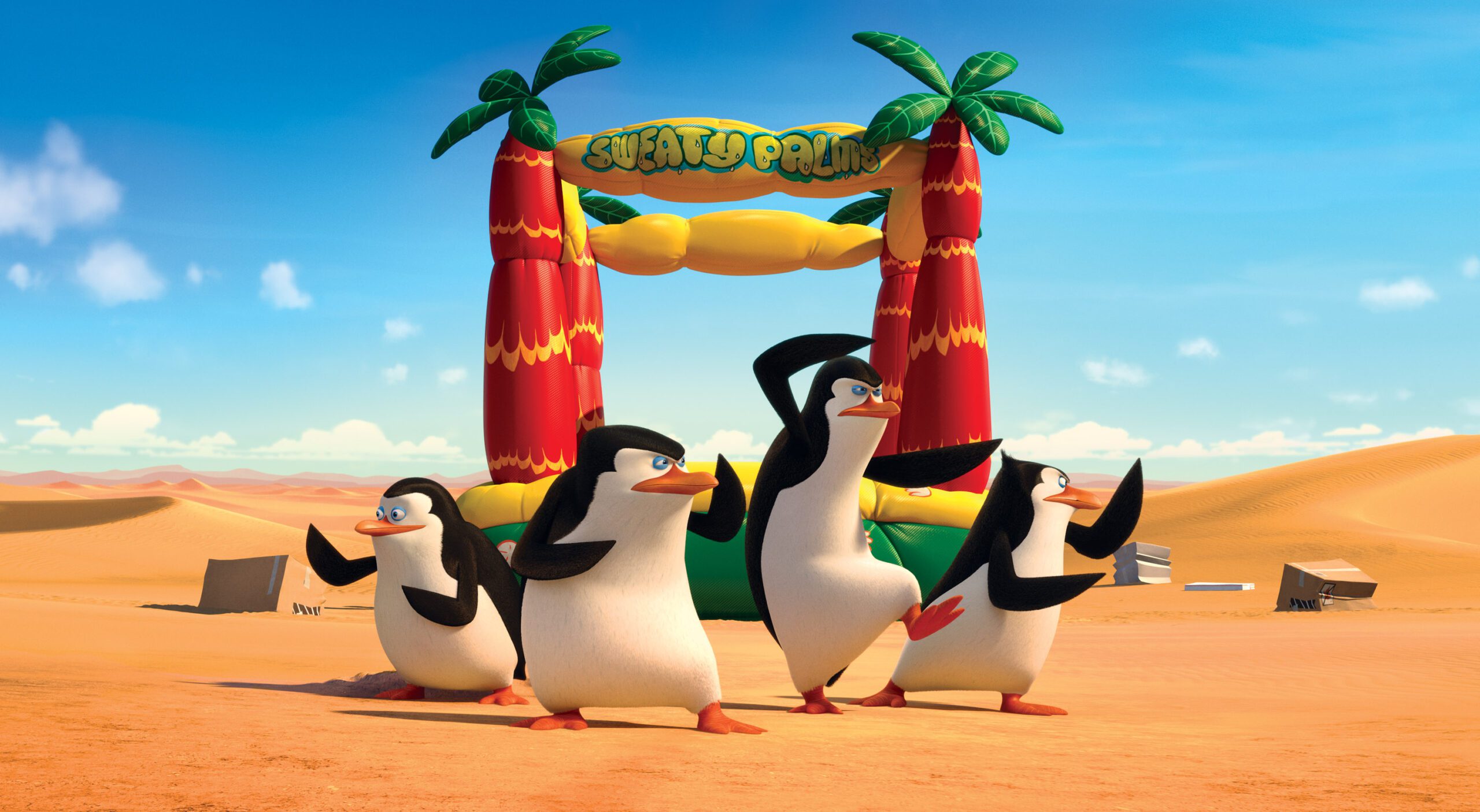 Penguins of Madagascar is the final film in the Madagascar franchise so far. Taking a page from Puss in Boots‘ book, the 2014 release focuses on the series’ comedic sidekicks, exploring their backstory and sending them on their own journey. The penguins also had a similarly titled TV series on Nickelodeon that ran from 2008-2015 and recast some main characters. Despite quite liking the Madagascar movies, I never saw Penguins of Madagascar when it came out or since. I actually wasn’t aware that a movie existed, mistakenly conflating it with the TV show. In the early-mid 2010s, I only saw DreamWorks movies that were sequels to ones I liked, like the Kung Fu Panda and How to Train Your Dragon sequels. That wasn’t a conscious decision; movies like Mr. Peabody and Sherman and Turbo just didn’t grab my attention. While I like the proper Madagascar movies, these kinds of spin-offs usually aren’t as funny or charming as the originals. Let’s take a look. 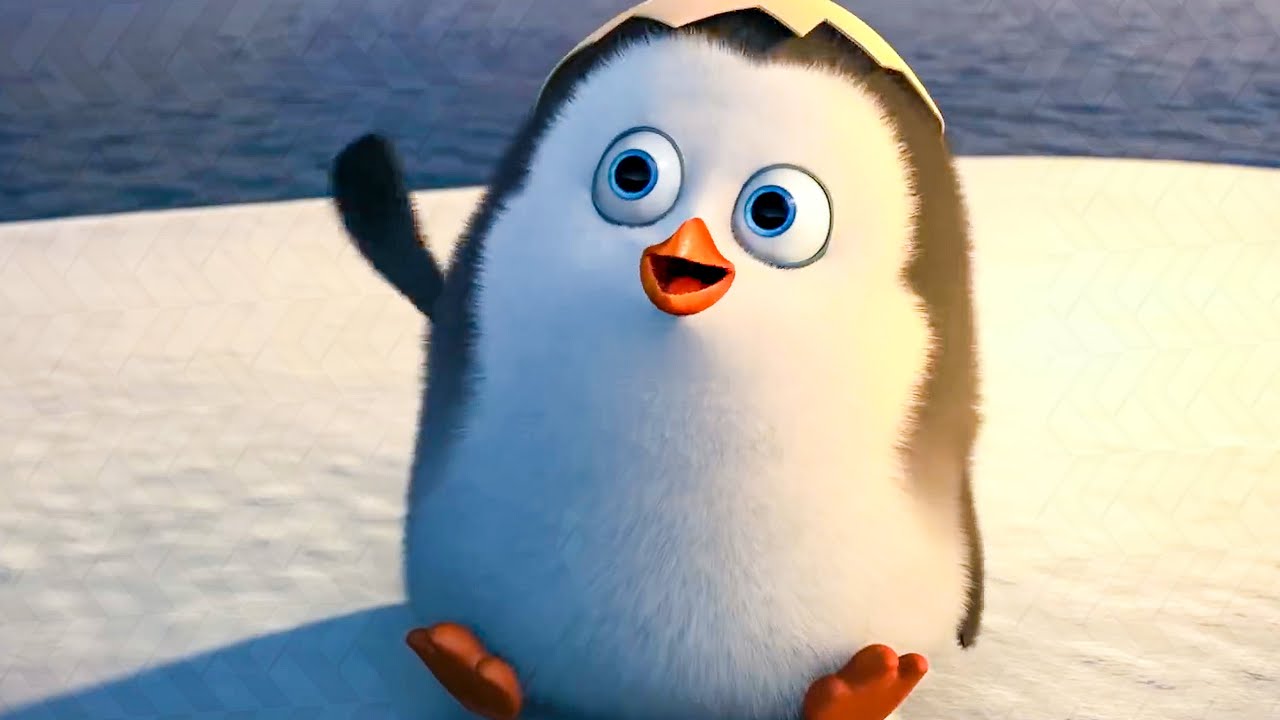 Penguins of Madagascar introduces us to our titular quartet as chicks with a penchant for defying nature and facing danger head-on. Skipper (Tom McGrath), Kowalski (Chris Miller), and Rico (Conrad Vernon) rescue an egg from certain death, and when it hatches, they meet and adopt Private (Christopher Knights). Private becomes the team’s cute member, which poses a problem as the years pass. Skipper is the leader and idea man, Rico is basically a Swiss army knife, and Kowalski is the smart guy. Private feels like the least valued member of this makeshift family, referred to as the secretary/mascot in the film. The penguins accidentally encounter Dr. Octavius Brine (John Malkovich) and discover an evil plot that threatens all of penguin kind. They find allies in the form of the North Wind, an organization dedicated to helping animals in need. If Skipper and North Wind leader “Classified” (Benedict Cumberbatch) can keep their egos in check, they might be able to stop Brine before it’s too late.

The animation in Penguins of Madagascar is exactly what you’d expect. The character designs are highly stylized, and the textures are pretty good but not amazing. The effects look about the same as they did in Madagascar 3: Europe’s Most Wanted. My one complaint here is the look of Private after his cuteness gets sapped by the ugly ray(yes, you read that right). Their idea of turning him into a hideous monster is coloring his feathers pink and giving him antlers. This isn’t particularly attractive, but I’m not sure it qualifies someone for monster status. Lorne Balfe’s original music is serviceable but a considerable step down from Hans Zimmer’s work on the series proper. I’m sure they probably couldn’t afford such a big-name composer for a film that lacked the series’ biggest stars and came out after its heyday was over. The voice acting is probably the biggest asset Penguins of Madagascar has. In addition to the OG voices of the penguins, John Malkovich plays the film’s antagonist, and Benedict Cumberbatch joins the cast as Skipper’s rival. Werner Herzog has a funny cameo (is it a cameo if the movie is animated?) as a documentarian filming the penguins in Antarctica. Ken Jeong is also diverting as Short Fuse, North Wind’s seal demolitions expert. Andy Richter also returns as the voice of Mort. Cumberbatch really disappears in his role as “Classified” and delivers the goods on a character that seems pretty thin on paper. Similarly, Malkovich is excellent and makes something of a villain that easily could have gotten too silly and tiresome. 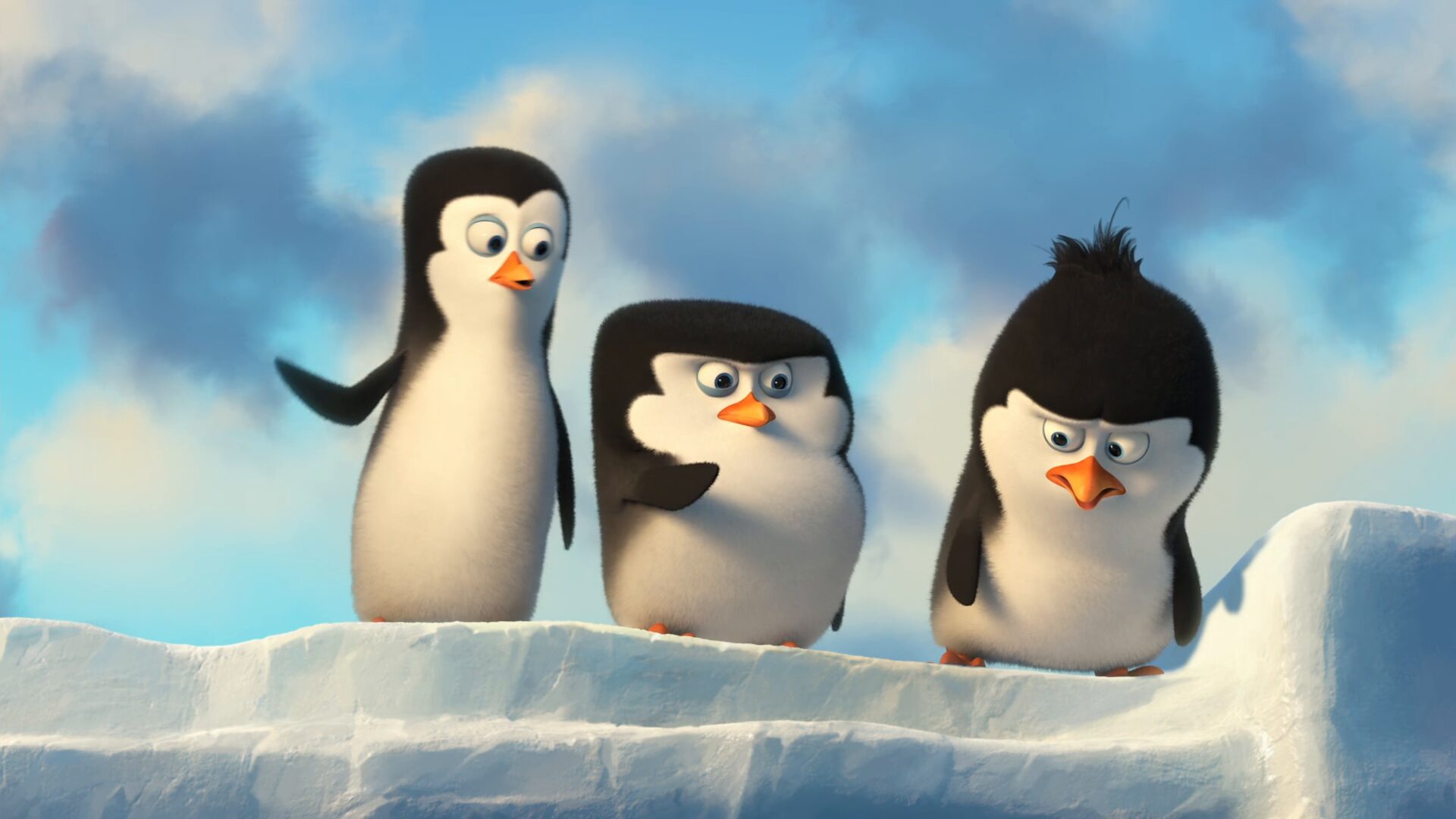 In fact, I think Brine/Dave might be my favorite character in Penguins of Madagascar. The decision to play his tragic backstory straight was a good one, and I genuinely felt bad for him as it played out. He actually reminded me a bit of Goob from Meet the Robinsons. It makes sense for Dave to feel this way after what happened to him, but his reaction is a problem. Instead of moving forward and trying to find happiness, he obsesses over his past and the individuals he blames it on. Penguins of Madagascar is just a comedy, so this doesn’t really go anywhere. Dave’s ultimate comeuppance is akin to Toy Story 2‘s Stinky Pete being given to a crayon-scribbling little girl. This is all well and good; I didn’t go into Penguins of Madagascar expecting to receive meaningful character arcs or a feel-good message. That might have made for a better movie, but that’s not the movie they were trying to make. So the real question is, how does Penguins of Madagascar hold up as a slapstick comedy? Not great. Even Dave’s greatest weakness comes in the form of the God-awful puns the writers force on Malkovich. Every time Dave communicates with one of his minions, they have a celebrity’s first name and what follows is some kind of play on that individual’s last name. This isn’t funny the first time and gets old really fast. The reveal that the well-respected Dr. Brine is an anthropomorphic, talking octopus is okay. However, I think they could have done more with this for a bigger laugh. 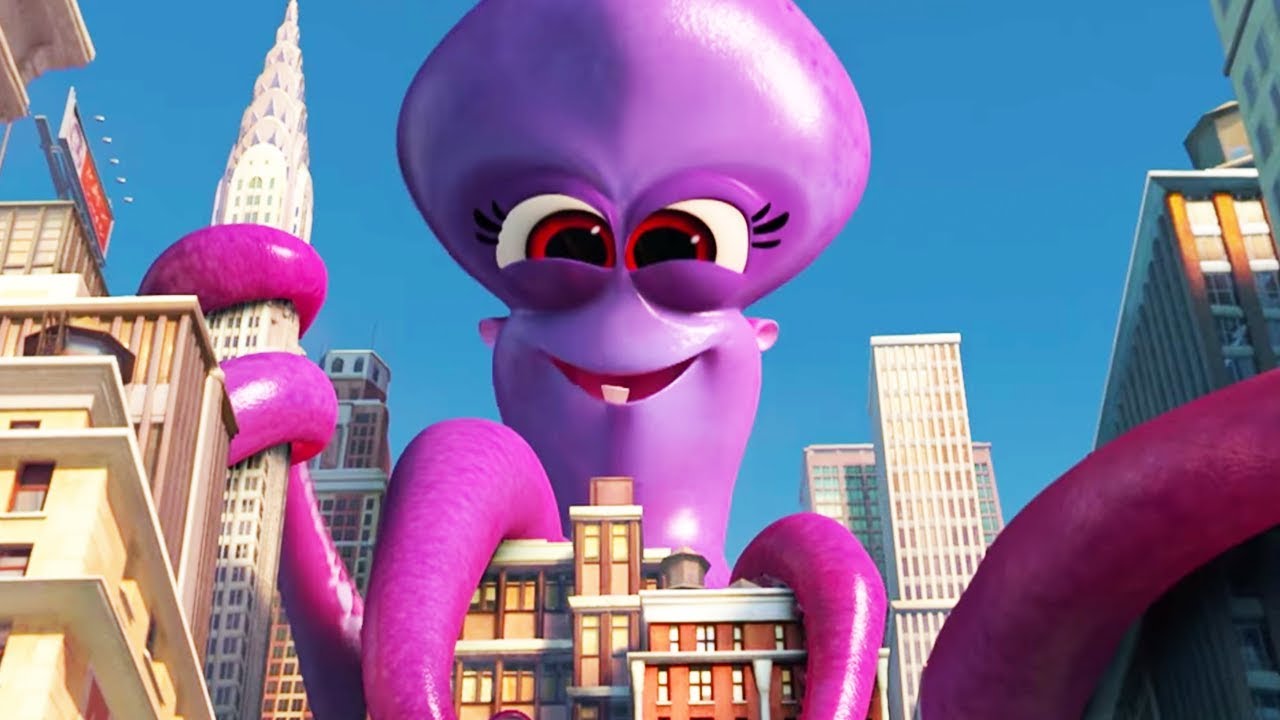 Private’s struggle with his place on the team is an interesting direction to take the story, and not necessarily what I expected based on the mainline Madagascar movies. Private was always portrayed as the dumb penguin and not much else. That actually plays into his motivation in Penguins of Madagascar pretty well, and I like the idea that he feels like the least valued, useful one in the group. I have a couple of problems with how this plays out in the film, and unfortunately, they’re big ones. Throughout much of the film, Private displays attempts to mimic Rico and Kowalski’s talents at various times. He successfully ingests and regurgitates a paper clip to get himself out of trouble, something Rico has been shown to do numerous times. Private also tries to inform Skipper of the situation, which is what Kowalski does. It wouldn’t bother me if these were just attempts at mimicry, but he shows aptitude at both, which seems a little contradictory to what the movie is trying to say. The audience (and Skipper) need to see Private as a necessary and valuable asset to the team. Why show him fulfilling needs that are already being met? This also calls Rico and Kowalski’s abilities into question indirectly. 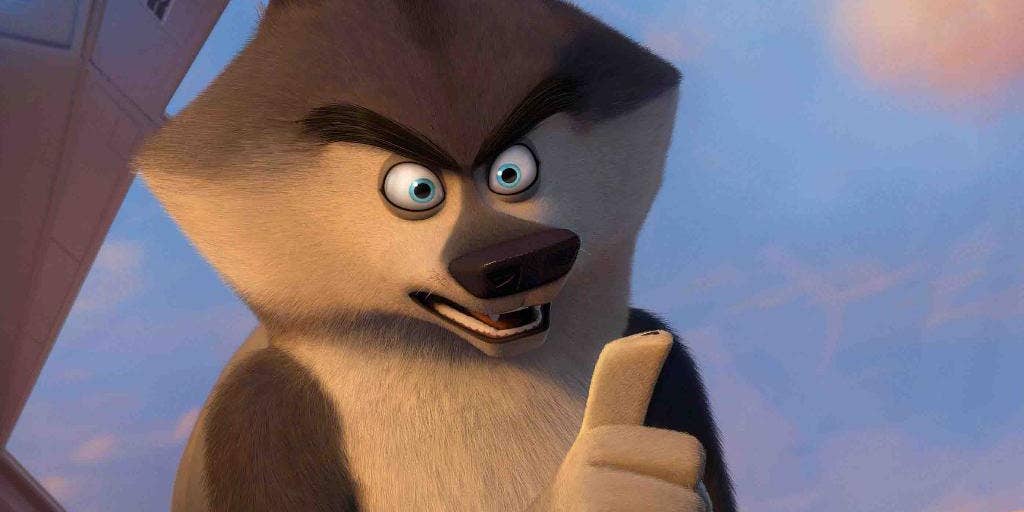 Later, Private’s special skill actually proves to be cuteness. Are you kidding me? That was his problem at the beginning of the film: his value was tied to his appearance. The others treat him like a baby because of this. Private shows initiative in creating a plan to rescue his friends and bravery in his willingness to carry it out. This should have been the focus, but it ends up being something stupid and cheesy about how Private is the group’s heart because he’s cute. I wasn’t expecting Shakespeare, but by the end, it’s painfully evident that this movie was probably mandated by the studio for financial reasons. The penguins aren’t the characters that made people love Madagascar. They’re not interesting, and by themselves, they aren’t even that funny. The North Wind doesn’t add much to the movie, and while I liked Dave at first, his jokes and ending left much to be desired.

Overall, Penguins of Madagascar is a waste of time. A surprisingly excellent voice cast and decent animation can’t save such a mean-spirited film. The jokes and slapstick humor aren’t even funny enough to justify the lack of character development. Furthermore, the film reasserts Private’s status quo rather than showing why he’s an essential member of the team. The entire point was supposed to be that Private is necessary and appreciated. Penguins of Madagascar has a couple of redeeming qualities, and I won’t say I regret finally watching it. However, it is pretty insulting, and Europe’s Most Wanted was a much better place to leave the franchise.

Overall, Penguins of Madagascar is a waste of time. A surprisingly excellent voice cast and decent animation can't save such a mean-spirited film. The jokes and slapstick humor aren't even funny enough to justify the lack of character development.