“No man can walk out on his own story.” 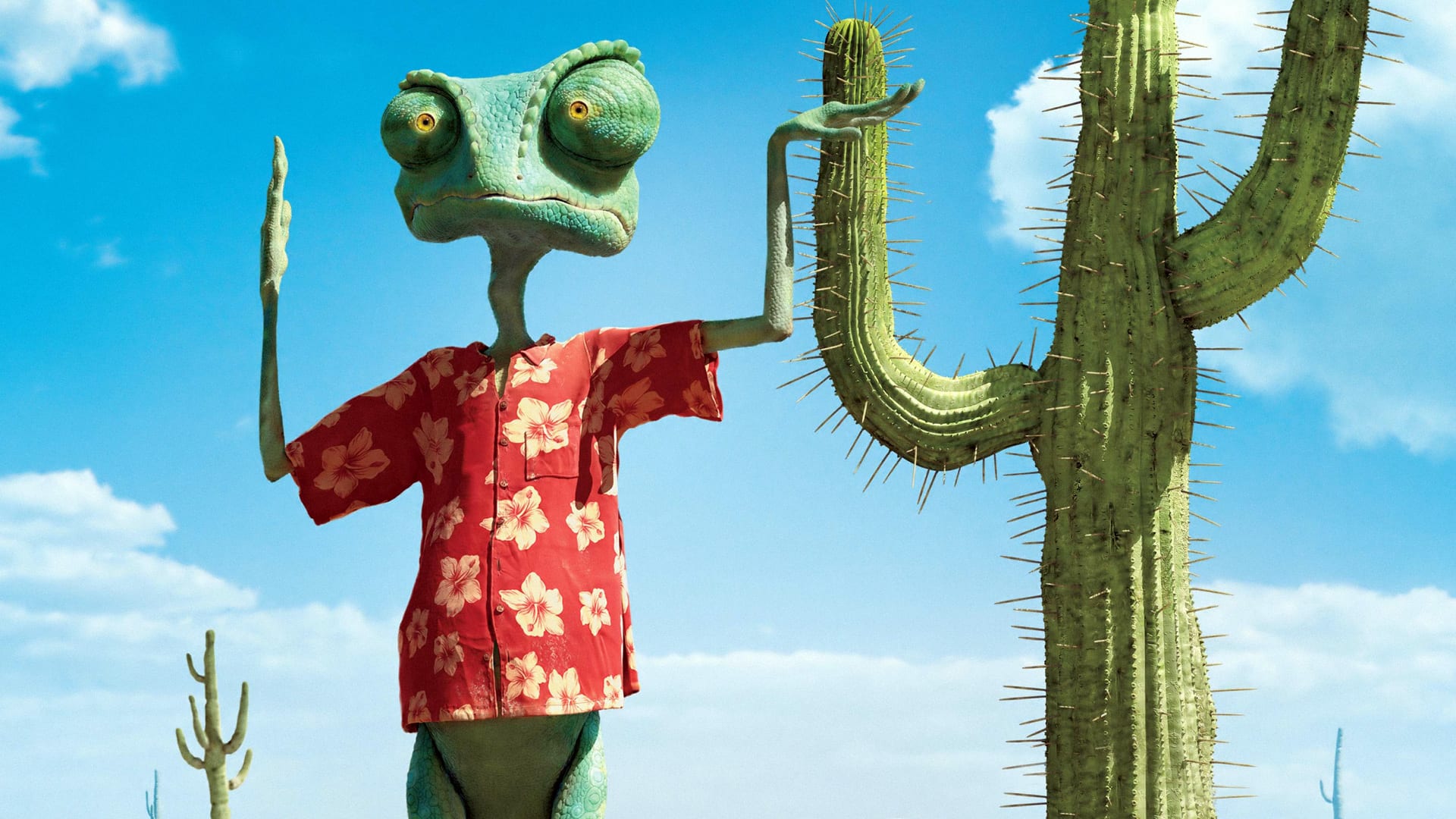 Like many people, I have a “to watch” list that constantly gets longer and rarely sees any progress. The pandemic and my new work situation have allowed me to watch a lot more of this stuff than usual, for both good and bad. Rango is a movie that I saw just once when it was new. I really didn’t like it; I thought the characters and story were dull, and the film’s aesthetic was just downright ugly. I remember being shocked at how well received this movie ultimately was. I’ve been meaning to rewatch it for a while to give it another chance. Let’s take a look.

Rango is a chameleon who doesn’t know who he is. Living captive in a fish tank, he fancies himself a seasoned thespian but has only his tank decorations to co-star and cheer him on. When Rango gets stranded in the remote Western town of Dirt, he has a chance to change his life. He can be anyone and do anything. Can this blank slate solve the mystery of the missing water and save the town?

I’m learning not to trust anything I believed more than a year or two ago. This film is far from boring. Director/producer Gore Verbinski (Pirates of the Caribbean, A Cure For Wellness) infuses Rango with a quirky tone and sense of humor that I have to appreciate. Rango is unlike any other film I’ve ever seen, a Western dramedy that marches to the beat of its own drum. Rango (Johnny Depp) is an unusual and highly entertaining character, a loser with no friends and no clear path ahead in life. When he finds himself in a strange new town, Rango seizes the opportunity to recreate himself as a fearsome gunslinger. He plays the part well enough for a while, but eventually, Rango is forced to choose between running or standing his ground and protecting the people of Dirt for real. Depp leans heavily into his eccentric side in his portrayal of this awkward, uncomfortable man searching for the role of a lifetime. I really like Rango’s cast of characters. Beans (Isla Fisher) is another unconventional lead, a poor farmer’s daughter with an attitude and an unusual condition that frequently and uncontrollably stops her in her tracks. Beans is irascible, often misinterpreting harmless remarks as slights against herself or her deceased father. 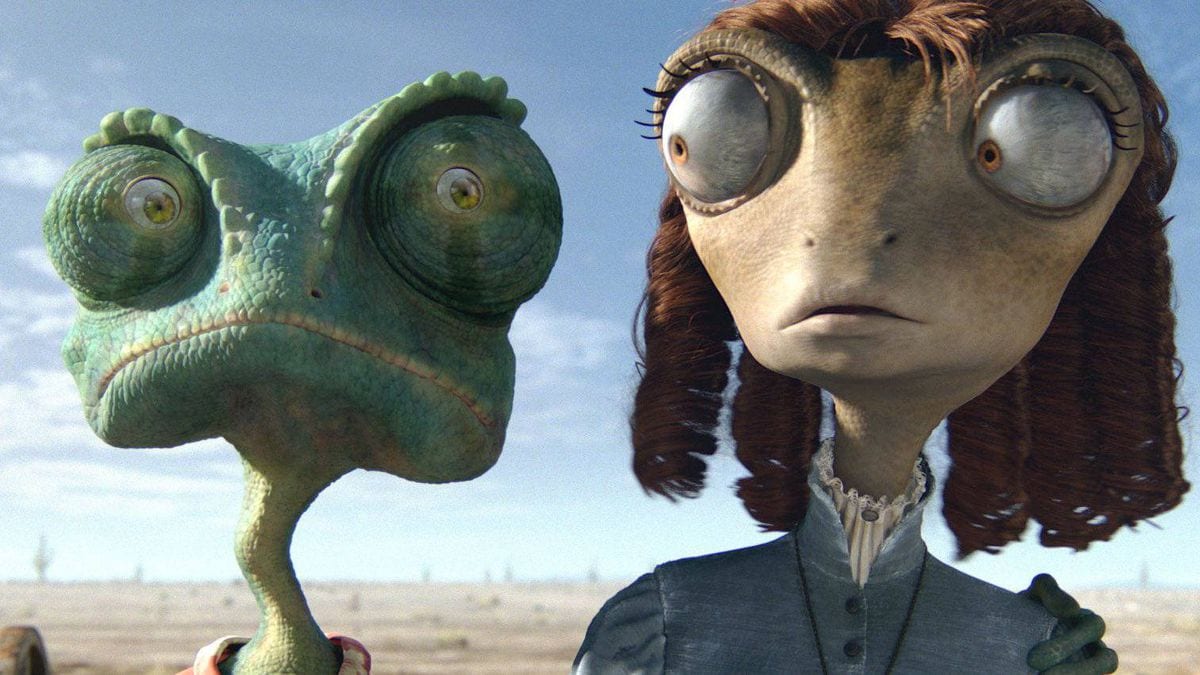 Ned Beatty plays John, the Mayor of Dirt. I like this character a lot as well. John starts out as a seemingly great guy, offering help to the townspeople and giving Rango the role of sheriff. This being said, there are clues to his true nature early on. For example, he “forgets” to offer Rango a glass of water in his office when bestowing him the sheriff’s badge. The Mayor actually gets some of my favorite lines of dialogue. He declares to both Rango and later Rattlesnake Jake that gunslingers are a thing of the past. Lawmen and the old West have to be done away with to make way for a shiny future of progress and profit. Beatty is perfect for this role. He completely sells first the helpful Mayor’s fatherly wisdom and then the unscrupulous manipulation of a greedy mastermind. Jake (Bill Nighy) is introduced as the film’s antagonist and remains as such until almost the end. But while he’s a ruthless killer, at least you know where you stand with him. Mayor John poses a greater threat as he ingratiates himself with his “friends and neighbors” like Beans to get them to sign away their land.

Jake makes an excellent red herring, and Bill Nighy is (unsurprisingly) fantastic in the role. The performance and animation are both menacing, and he has quite a striking character design. Jake’s eyes are both gorgeous and truly frightening to behold at the same time. The villains are some of my favorite characters in Rango in part because the actors playing them are so darn good. However, Jake and John also interest me because they embody two different, contradictory views of the old West; savagery vs. progress, tradition vs. innovation, physical power vs. political power. Rattlesnake Jake is everything we associate with the old West, a cold-blooded cowboy who lets his actions speak for themselves. But the Mayor is more concerned with what the West can become and what he can get out of it. He even comments that people are too “civilized” for the likes of Jake and Rango now; big talk from another cold-blooded killer. I like how the filmmakers turn expectations on their heads by having the kindly, old turtle as the real baddie rather than the scary rattlesnake. The Mayor being such an ancient creature, having seen over a century of technological advancement come to fruition, adds a lot to his arguments. This movie is masterfully written, leaving bread crumbs along the way that add up if you pay attention. There are also lots of little details to pick up on rewatch. Rango is written by John Logan, who also wrote for the James Bond movies, Penny Dreadful, and Gladiator. He’s a hit-or-miss screenwriter for me, but this is a win. 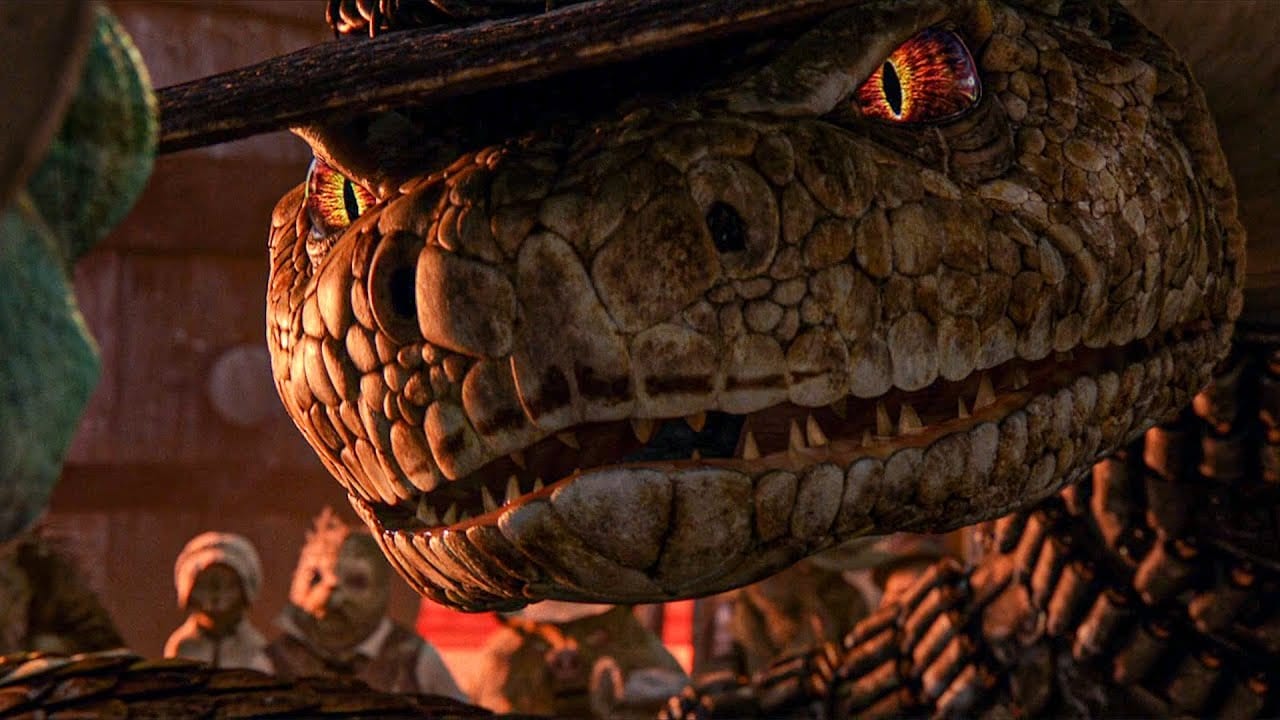 That being said, I don’t think the antagonists and side characters steal Rango’s thunder. He’s the first character we meet, and this is his journey we’re on. Rango starts the film as an aspiring actor, so it’s fitting that there are so many references to Westerns and other films. At one point, Rango is stuck on the windshield of a car being driven by what appears to be Hunter S. Thompson, Depp’s own character from Fear and Loathing in Las Vegas. More obvious and of greater significance is the Spirit of the West. We hear about this entity early into the film from an armadillo (Alfred Molina) Rango encounters on the road and again when the townspeople pray to the Spirit. When the Spirit manifests itself before Rango, it’s clearly meant to be Clint Eastwood, with Timothy Olyphant providing an impressive impression. Rango even calls him “the man with no name” at one point. Rango’s journey is one we can all relate to on some level. Rango just doesn’t know what to do with himself. When he does find his path, his own doubts hold him back until the Spirit of the West, essentially a god, steps in and talks sense into him. It’s clever that the chameleon protagonist, a literal changeling, is an aspiring actor who doesn’t know who he wants to be. Not only is Rango a funny, exciting film with wacky characters; it also has a lot to say about the Western genre and its place in modern society.

Usually, when talking about animation, I either praise pretty visuals or decry unpleasant aesthetics. Rango is a strange case in that it’s absolutely hideous much of the time, and I love it for that. These characters live in a rough, unkind world where water is a luxury. They’re gross, unkempt, and many are missing limbs. They’re a perfect representation of the difficulties that come with living in a town like Dirt. There’s a lot of visual shorthand in the film, like the town’s tavern only serving cactus juice; even the beverages the people of Dirt drink are harsh and dangerous. There is optical splendor in Rango, such as the characters’ silhouettes burnt into the sun during the “we ride now” sequence. These brief, splendiferous interludes highlight the harsh reality that Dirt is an arid wasteland. Technically, the film is a marvel; the fur on the animals, the sand, water, etc., all looks real. It’s wild how a film can be so stylized and photorealistic at the same time. The film’s whole look is unlike anything else I’ve seen in American animation. Cinematographer Roger Deakins (Fargo, Blade Runner 2049) brings a stark, harsh style that we rarely see in the animated medium. The contrast created by more fantastical sequences helps to make Rango a genuinely unique experience. The original score by Hans Zimmer is gorgeous and genuinely inspiring at times. It sounds like traditional Western music while maintaining the film’s distinct sensibilities at the same time. I genuinely had pieces of this soundtrack stuck in my head for hours after watching the movie. The mariachi band that follows Rango, chronicling his exploits, is quite funny too. Their lyrics are hilarious, and the tunes are memorable. 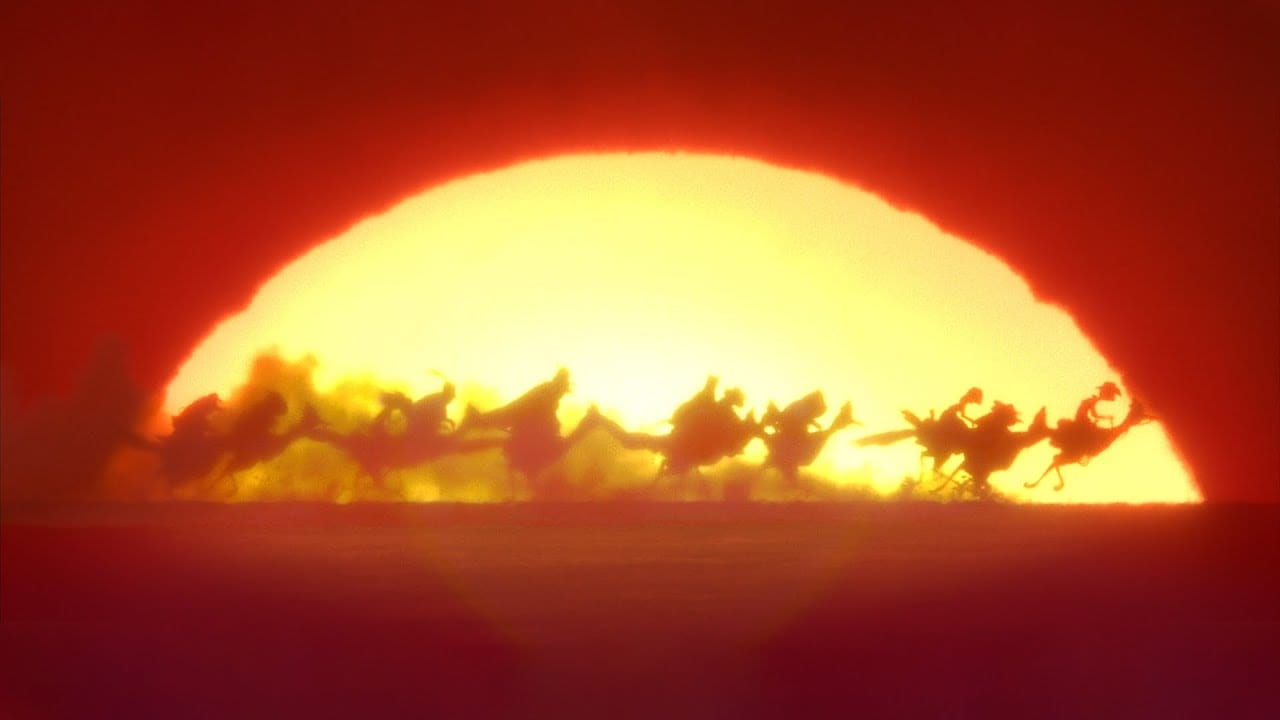 Rango‘s voice cast is impressive as well. Of course, Johnny Depp is good as Rango, and Isla Fisher’s southern twang for Beans is a riot while still sounding sincere. Stephen Root voices several characters in Rango, namely Mr. Merrimack, Doc, and Mr. Snuggles the porcupine. Harry Dean Stanton, Ray Winstone, Ian Abercrombie, Blake Clark, and more lend their voices to the townspeople. Bill Nighy probably gives my favorite performance in Rango for his chilling nonchalance as Jake. But Beatty’s deceptive grandfatherly warmth is awesome too. I was surprised to see how many great actors were in this and how wonderful the performances are.

Rango is one of the weirdest movies I’ve ever seen. It’s an animated comedy about a talking chameleon that doesn’t beat around the bush when it comes to the old West’s brutality. Jokes and bullets are exchanged in spades while the film questions and ultimately reaffirms the value of the gunslinger on film. I genuinely can’t imagine what demographic this film was made for. It’s a little too spicy for kids (and I can imagine them getting bored, like I did, when it came out), but many adults consider animation child’s play. Rango is a perfect example of why animation deserves more respect. It serves as a stepping stone among the progress the medium has seen over the past few decades. I find myself asking who this movie was for, but I absolutely love it and look forward to revisiting it in the future. If you like Westerns, offbeat, character-driven comedy, or just want to see something different, you might love Rango too.

If you like Westerns, offbeat, character-driven comedy, or just want to see something different, you might love Rango.