Big Mouth’s second season premiered earlier this month on Netflix, and at first I wasn’t sure if I was going to watch it. I thought season one was alright; I hated the animation style and, for the most part, the humor didn’t do much for me, but they did broach some difficult topics, and some characters had interesting developments. Overall I’d say I probably enjoyed season one enough to justify the time I spent watching it, but I wouldn’t necessarily go back and revisit it. Let’s see how season two shapes up.

Season two of Big Mouth ups the ante with regards to the awkwardness of puberty and the honesty with which they portray delicate issues. This season, Andrew hits a growth spurt and begins to feel like a pervert. Meanwhile, Nick hasn’t grown at all and wonders if his hormones aren’t working properly. Gina, one of the kids’ classmates, starts to develop breasts and it causes chaos as the boys take a new interest in her and the girls begin to resent her. Jessi’s turmoil over her parents’ divorce and her mother’s newfound lesbianism culminates in her stealing, running away and ultimately confronting depression. All of the kids are faced with a new presence, the dreaded Shame Wizard who guilts them relentlessly, even over things you really shouldn’t be ashamed of. The season doesn’t end with any solid answers but with the friends all reconciling and Jessi seeking the help she needs. Topics like contraception, slut-shaming and body image are covered throughout the 10 episode season.

I decided to watch season two after all because several of my friends said it was better than season one, and that it went deeper into issues faced by kids of this demographic. Overall I agree with that assessment, though I think it’s only a little bit better than the first season, and I don’t really think it’s any funnier. Despite being an animated comedy, the animation and the comedy in Big Mouth are the two worst things about it for me. It seems like most adult cartoons go out of their way to have hideous animation and character designs as part of the joke, and I don’t think it’s funny at all. I don’t know why irony has become the new norm, but I’d rather look at aesthetically pleasing animation, whether the show is a comedy or not. In fact, I’d say the animation style probably puts off a lot of people who otherwise might enjoy a show like this. Even characters like Gina and Leah, who are supposed to be really pretty, are just freakish to look at. Most animated characters have large heads and exaggerated features, but here it makes everyone look almost alien; it’s very generic. 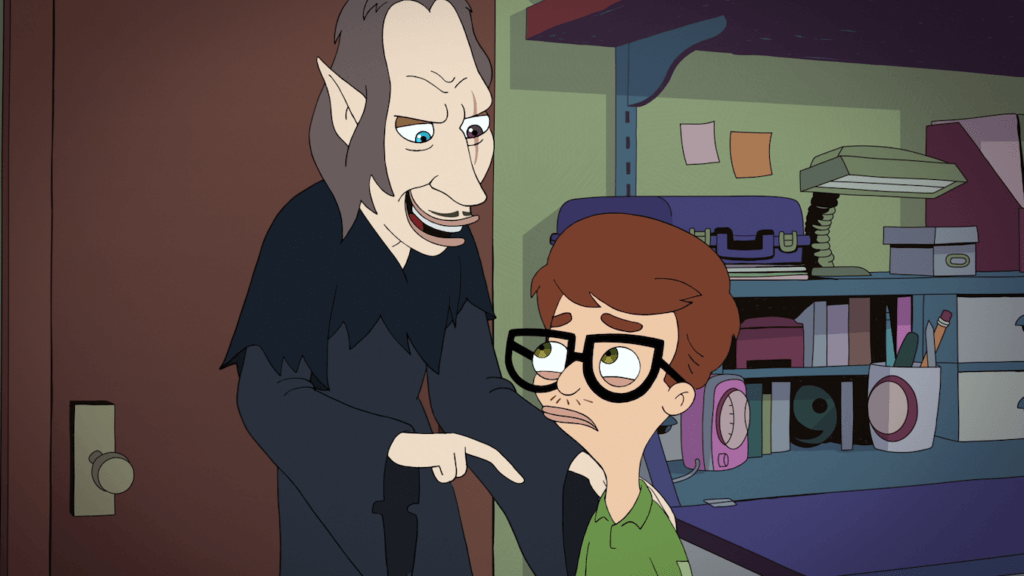 I don’t care much for the show’s visual and verbal comedy because it’s a combination of juvenile and gross; again, like with the animation style, I realize this is intentional. The more childish jokes can be attributed to the very fact that most of the main characters are children, and I get that. I can usually enjoy lowbrow humor when done well and with good comedic timing, but here it just feels so lazy. They joke about things like pubes and kids being pantsed in public, and it feels like they definitely went for the easiest, most obvious visual gags. There is only one joke in this season that made me laugh, and I laughed in retrospect; someone refers to the Shame Wizard as having a Harry Potter accent, and this struck me as interesting because he sounded like David Thewlis, who played Professor Lupin in the Harry Potter film series, Prince (later king) Einon in DragonHeart and Ares in Wonder Woman. When the credits rolled, surely enough Thewlis was credited, and I sort of found that amusing. But none of the wordplay or visual humor this season is particularly clever, and it didn’t even appeal to my childish side so much as it made me roll my eyes. People always say comedy is very subjective, but honestly, that’s redundant and an unnecessary modifier; everything is subjective. My husband is terrified by scary movies and can’t handle most of them, but I find them boring most of the time. I can watch a movie and find it inspiring, and maybe you’ll think it was just cheesy and dumb. Of course, there are always trends and stereotypes and demographics, but every genre and every movie and TV series is subjective. This includes comedy, and Big Mouth’s brand of humor just doesn’t do it for me.

It probably sounds like I didn’t like the season, since I don’t like looking at it and I didn’t find the jokes clever or even palatable, but that’s not entirely true. I quite like the Shame Wizard, both for what he represents and for Thewlis’ line delivery. As soon as they introduced this character, I thought it sounded like the seasoned actor, but I assumed he wouldn’t be in a show like this and it was someone doing a similar voice. After all, the Hormone Monster in both seasons is played by Nick Kroll, but sounds so much like Will Arnett you wonder why they didn’t just ask him to do it. With the Shame Wizard, there are even a couple of scenes that I found kind of touching. If this show returns for season 3, I really hope they bring back Thewlis and this character.

I also quite like Jessi as a character. She makes a lot of bad decisions and isn’t always nice, but you understand where she’s coming from, and she does apologize both to Gina for slut-shaming her, and her mother for acting out. I find Jessi to be the most sympathetic and relatable of the three leads, and I really like how they show her insecurity and how she takes out her frustrations on her mother. I’m not entirely sure about boys, but I know a lot of girls do this to their mothers, and I was one of them. I have mixed feelings about this case, though, because her mother is making things incredibly difficult for Jessi by throwing her father out and sleeping with Cantor Dina. It’s clear that this is a very complicated situation and Jessi’s dad is a loser, but I can’t help feeling like her mother should try and make things work rather than humiliating and traumatizing her daughter in this way. My parents were together for my whole childhood and still are, but I’ve always found it difficult to sympathize with people who break up their families with infidelity and divorce. It’s hard to understand, and very easy to sympathize with Jessi and her complicated emotions during this time. I also really like how they showed Jessi and the other girls tormenting Gina for being a “slut” and how it’s really because they’re jealous and a bit vindictive. Gina probably got it the worst this season because all of her classmates see her as an object: one of jealousy and misdirected anger for the girls and one of desire for the boys. It’d be interesting to learn even more about her in potential ongoing seasons. 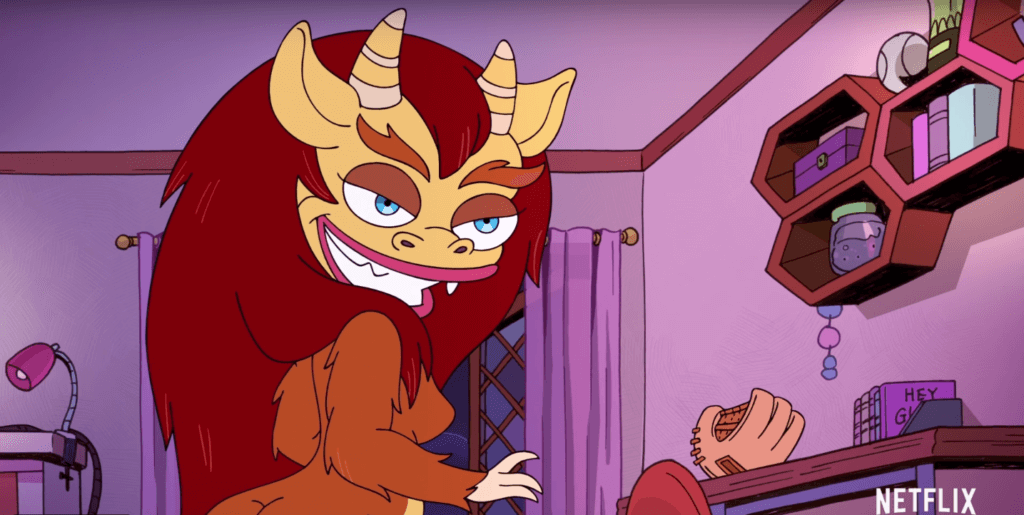 Nick and Andrew get interesting storylines too, most notably Nick’s pursuit of Gina. He says he cares about how smart and funny she is, and that seems to be true, but it’s still telling that he never paid attention to her until she blossomed, and the same is true of all the boys in the class. As with most issues the show tackles, Nick doesn’t get off easy, and neither does anybody else, and his relationship with Gina is destroyed when he tells everyone he got to make out with her and feel her up. Andrew is similarly crucified for his newfound libido, and as with Jessi’s freak out, I think this is something most people can probably relate to. The Shame Wizard is a physical manifestation of the guilt most people grow up feeling about sex and attraction. Andrew’s treatment of Lola is questionable, as is pointed out, but I have difficulty feeling sorry for her. She makes a big deal about how nobody wants to be friends with her, and she’s frequently alone, but that’s because she’s a terrible person who’s continuously mean to everyone else.

One thing that bothered me is that there’s a scene in episode 4, “Pantsing Week,” where Nick gets pantsed in public and is, of course, humiliated, but then this is forgotten and rarely mentioned again throughout the remaining six episodes. I’m not saying this should have been the focus or anything, but why show something so horrible and make it so dramatic just to drop it? Nick and everyone else seemed to be over it as soon as the credits rolled. I also have to say that I don’t like it when they show the kids naked and the girls topless. It feels exceptionally creepy showing all these pre-pubescent and just-now-pubescent kids in this way. I know it’s animated, and again, they’re trying to make a point, but this just seems wrong. I also don’t care for Coach Steve or find him very funny at all. Stupid characters like this just blow my mind; it’s not interesting, and it’s not funny, so it ends up feeling like I’m missing something. I find it distracting that all of the kids are voiced by adults, but this may be something of a moot point since it’s a show for adults. The actors mostly do an excellent job; it just takes me out of the story whenever they do this with cartoons.

Overall, Big Mouth season two, like season one, is just okay. I’m not really with the people who hate it and find it offensive, but I can’t say I love it or think it’s brilliant either. There are a lot of great ideas here, usually the more serious themes of shame and coping with changes in your body and your life. I love this show’s take on body positivity and not shaming others for their choices, and sometimes these kids are really put through the wringer. I just really, really hate this animation style and the humor literally feels like it was written by a five-year-old. A mostly great voice cast, interesting storylines and sympathetic characters make Big Mouth worth watching once, but they don’t quite save it from its darker instincts.

Big Mouth Season 2 has some good aspects, like pointing out how hard it was to be a kid and the various situations people often found themselves having to work through and process while growing up, but much of this is overshadowed by shoddy animation and humor that misses it's mark. Worth a watch, but maybe not a revisit.