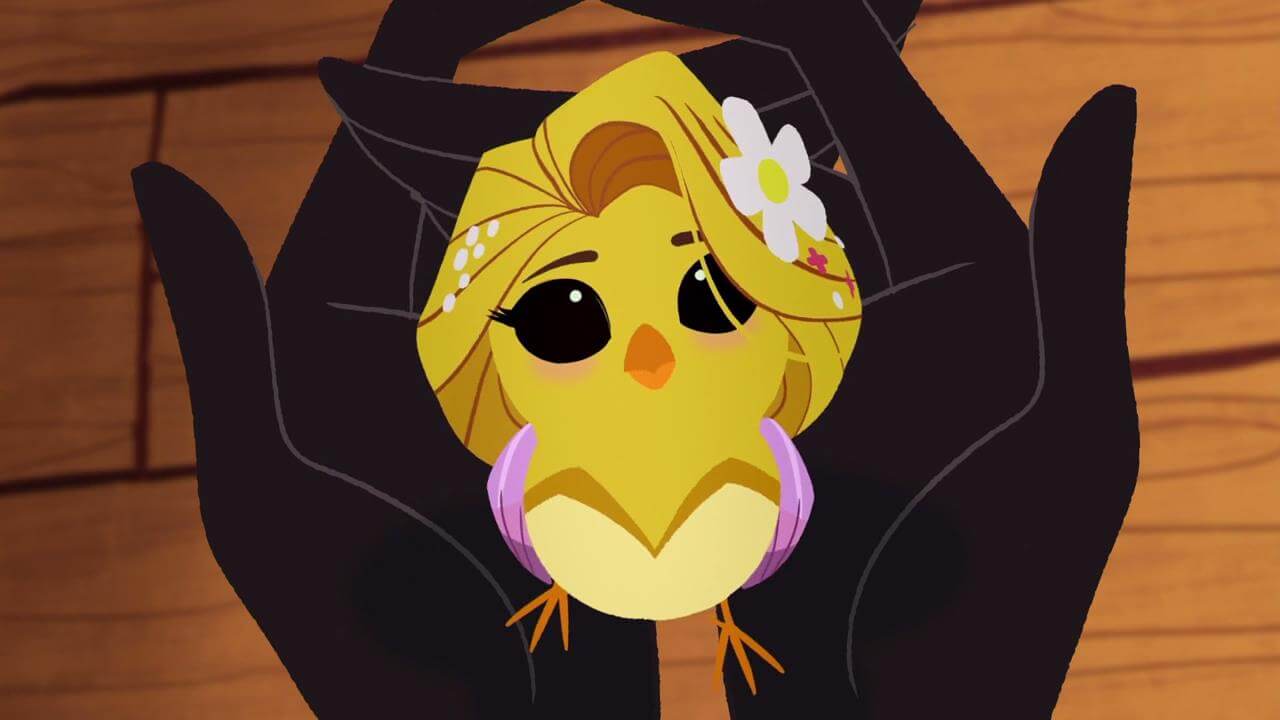 In “Freebird,” Cass finds Rapunzel meditating and insists that the break is over and they need to move on. Eugene, Lance, and Hookfoot get into a disagreement over who’s the strongest, provoking the bemused female party members to go off on an adventure. They come upon a couple who invite them to tea, but the tea turns them into birds. They explain that the spell is harmless, but that they have to return to human form within one hour or they’ll be birds forever and have the mind of a bird.

Noticing that the girls are gone, Eugene, Lance and Hookfoot decide to look for them. They also stumble upon the tea drinkers. Meanwhile, the girls return to be turned back into humans, which the couple decline to do. Rapunzel tells Cass that she keeps getting sidetracked because she’s afraid of the rocks and where they may lead. The man puts them in a cage, where they find their friends – who have also been turned into birds. The birds use their combined strength to escape the cage, overrunning the couple and saving the other people trapped by them.

“Freebird” is a really strange episode and one that honestly feels like fanfiction. I’ve mentioned before that, at times, it feels like the writers just don’t know what to do with this show, and it was never more evident than in this episode. These events don’t feel connected to those of the movie or even the first season of Tangled the Series. Why turn the characters into birds? It feels incredibly forced, and moreover, they fail to get any great comedy or drama out of it. “Freebird” doesn’t start out bad; the guys having a strength competition is dumb, but could potentially be funny, and I was interested in seeing where Cass and Rapunzel were going.

When they run through the woods, the visuals are lovely, and once they stumble upon the villains only identified as Mother and Father (and they call each other this, which is totally creepy), I got an Alice in Wonderland vibe. They’ve got the weird outfits and the colorful teapots, and I was wondering if this would be some sort of homage to the Alice in Wonderland tea party, but there was no such luck to be found. Rapunzel’s Tangled Adventure/Tangled the Series continues its run of disappointing villains with this couple who turn people into birds because… they like birds. This could be played funny or quirky enough for it to work, but instead it’s played straight. The main obstacles in “Freebird” are a couple of weirdo bird watchers with magical tea. I legitimately don’t understand what they’re trying to achieve with this series, and at times it feels like the creative team behind it doesn’t care.

“Freebird” being a filler episode that adds absolutely nothing to the show’s larger plot, they try to focus on the relationship between Cass and Rapunzel. As usual, Rapunzel acts like herself, Cass yells at her, and Rapunzel apologizes. I’m getting really tired of this aspect of the show, and I don’t understand why they keep doing it. It feels weird because Rapunzel is a princess and Cassandra is her confidant/guard/handmaiden. Where does she get off yelling and getting self-righteous every time Rapunzel breathes? And most of the time the apology doesn’t feel earned or necessary. Rapunzel rarely wrongs Cassandra, so her frequent righteous anger feels ridiculous. At times it would be more appropriate to have Cassandra apologize for being a nightmare and a terrible friend who criticizes everyone all the time. Admittedly, they do have a moment where it seems like Rapunzel will be a bird forever, and Cassandra asks her not to leave her, stating that Rapunzel is her best friend. I appreciate the intent here, and it is one highlight of an otherwise throwaway episode.

The animation in “Freebird” is pretty good, although I rolled my eyes at the designs of the birds: each character looks like themselves, just as a bird. Rapunzel still has purple sleeves and long blond hair, Cass still has a short black bob, etc. This seems unbelievably lazy, and it looks ridiculous. This episode has a big musical number for Rapunzel and Cassandra as birds, “View From Up Here,” and while it’s not horrible, it’s not good either. I’m just about resigned to the notion that all of the effort for this show goes into the season premieres, finales, and special events, but I keep hoping I’ll be proven wrong.

“View From Up Here” is bland, forgettable and trite. It’s just Rapunzel singing about how much she likes being a bird and Cassandra gradually agreeing with her. In theory, I love the concept of a duet where we get each characters’ differing perspectives on something. But in this song, everything feels so obvious, and it adds further frustration to see Cassandra enjoying being a bird so thoroughly, only to yell at Rapunzel again about the exact same thing five minutes later. And I really, really wish she would stop calling her “Raps.”

As I mentioned, the guys’ strongman competition is ridiculous. It’s not particularly funny, and they drag the rivalry throughout the entire episode. Normally this would manifest in some payoff, but in “Freebird,” they band together to escape and then resume arguing over who is the strongest. This wasn’t funny, satisfying, or important, and they probably shouldn’t have done it at all.

“Freebird,” overall, is emblematic of my issues with Rapunzel’s Tangled Adventure as a whole. This episode is silly but not funny, attempts to be dramatic but rarely succeeds, plays out a fanfiction-esque plot that adds nothing to the story or characters, and delivers a mediocre musical number unworthy of the Disney brand. I’m torn between believing that there’s just nothing meaningful for the writers to do with the characters for 26 episodes a season and believing that there’s no excuse for a follow-up to such a good movie to be so mediocre. I’m reminded of another animated series, Nickelodeon’s Legend of Korra, where I was certain that the second season would be much better than the first, only for the opposite to happen. So far, the first season of Tangled the Series was much tighter and more interesting than Rapunzel’s Tangled Adventure has been. This series is endlessly frustrating, and it feels like the writers either don’t care or have no idea where to go from here. I’ll continue watching, but I can’t say I’m excited so much as annoyed. As for “Freebird,” not only would you not be missing anything by skipping it, you’d be better off.

“Freebird,” overall, is emblematic of my issues with Rapunzel’s Tangled Adventure as a whole. This episode is silly but not funny, attempts to be dramatic but rarely succeeds, plays out a fanfiction-esque plot that adds nothing to the story or characters, and delivers a mediocre musical number unworthy of the Disney brand.