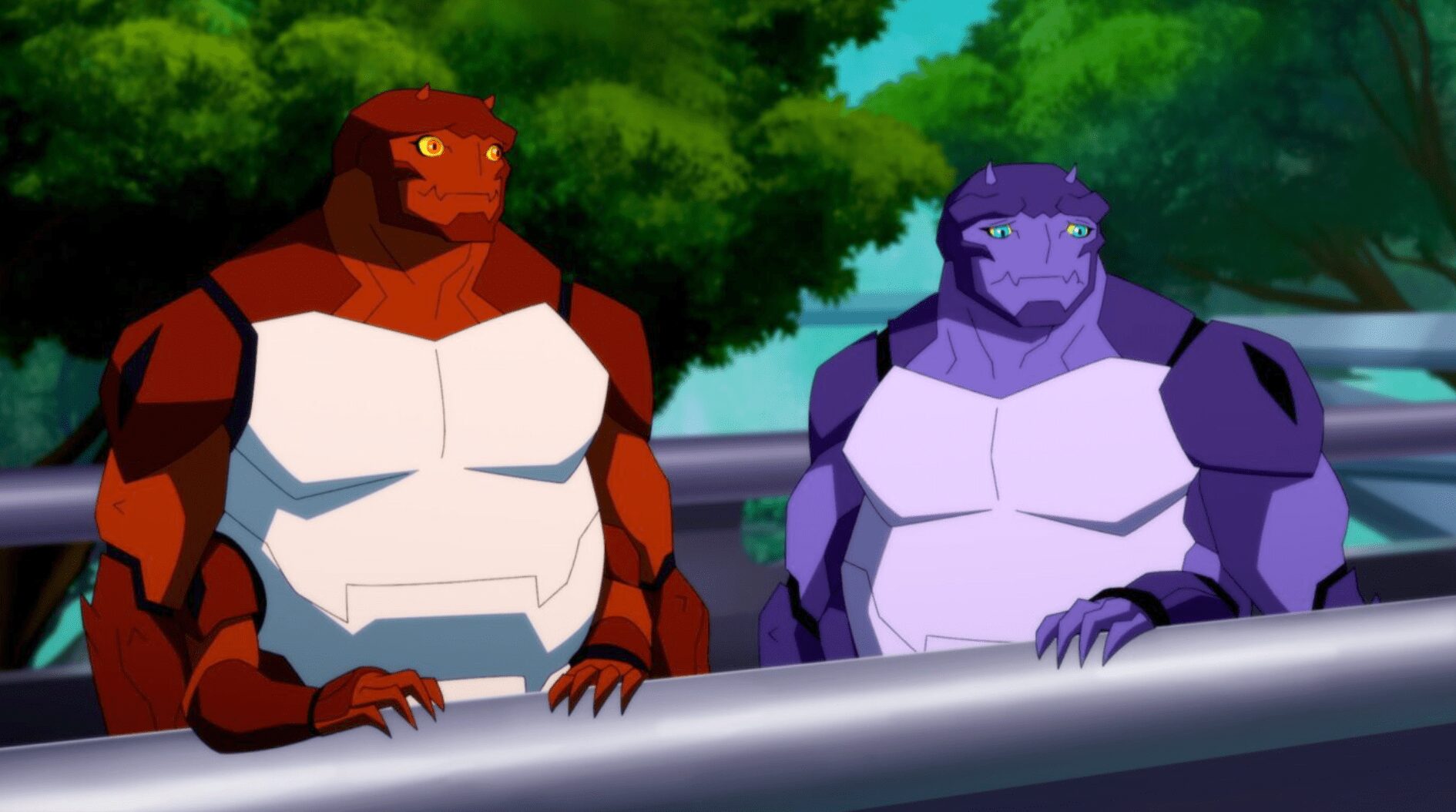 “Encounter Upon the Razor’s Edge!” finds the Legion of Superheroes yet again trying to set the timeline right. Bart demands information if they want his help. Meanwhile, M’comm offers Lor-Zod the same ultimatum. Two Green Lanterns receive a distress call and follow it to a Blue Lantern named Razer. The two Foragers discuss Supertown and New Genesis politics. The Legion of Superheroes tells Bart that their mission concerns the Phantom Zone and those imprisoned there. At the same time, Lor-Zod tells M’comm about his birth following the parole of his parents from the Zone. These stories coincide as Saturn Girl describes the League quashing Zod’s uprising, which Lor portrays as a heroic effort to rally the people against an oppressive government. Lor sought to kill Conner in an act of vengeance against him as an El family member and the inspiration for the Legion. 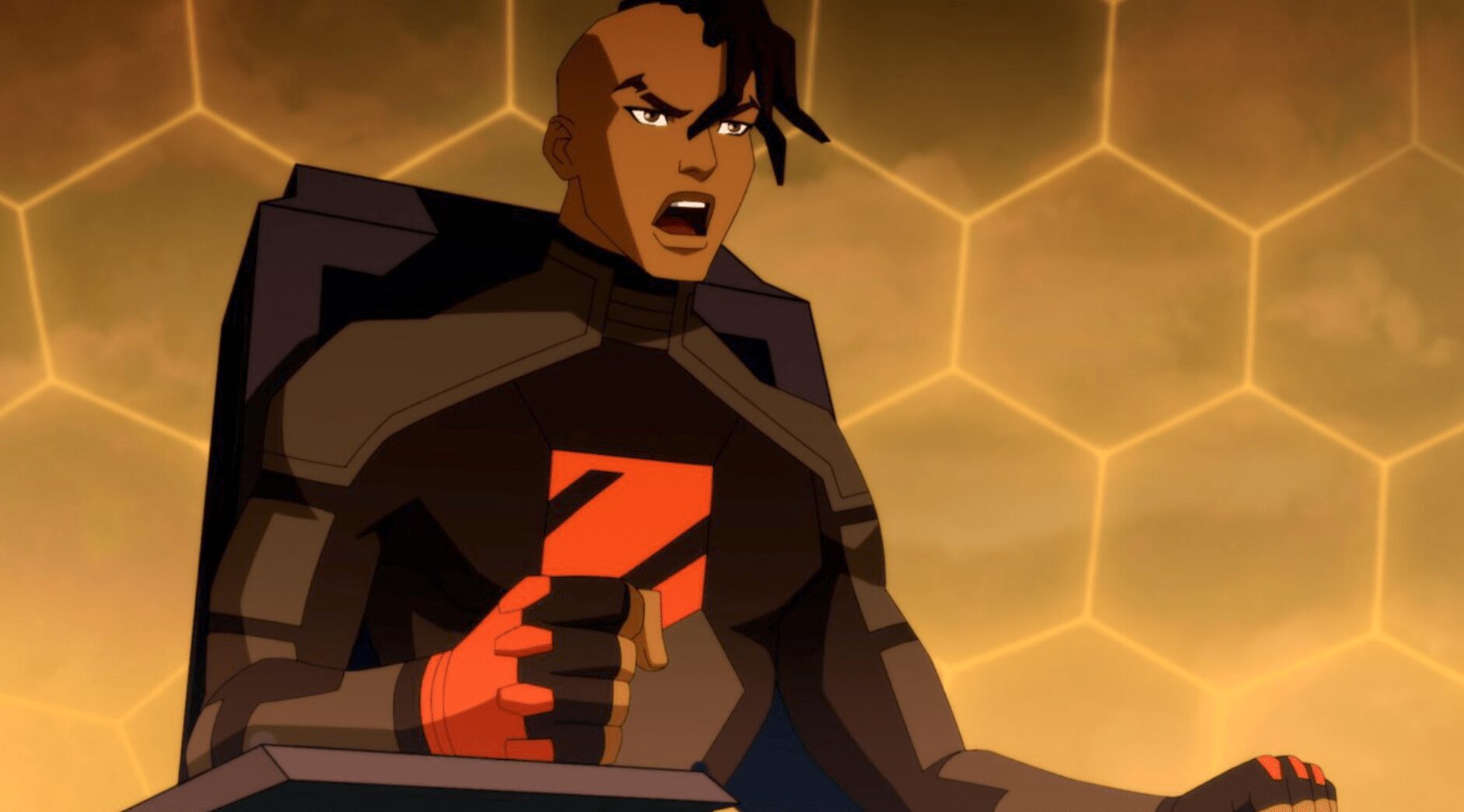 Razer asks Metron for his old Red Lantern ring back, but Metron will only comply if given the Blue one in return. The summit between the Justice League members (Flash and Rocket), the Green Lanterns, and the New Gods gets off to a rocky start as Rocket requests more help against Apokolips and the Metahuman crisis. The New Gods will not break their truce with Darkseid. These simultaneous history lessons reveal that both Lor and the Legionnaires believe Conner to be dead rather than trapped. Rocket receives a call from Amistad’s father informing her that the school wants to give their son an aide for classwork. Metron trades rings with Razer, telling him this was his plan all along. Rocket’s call is interrupted by the fallout from Razer’s attacks on Metron. By sheer force of will, Razer calls the blue ring back to him, wielding both together. He heals the female Forager after accidentally injuring her. After setting things straight, Razer flies off in search of someone named Aya.

This almost looks like a late April Fool’s Day prank, but I swear it’s not! Razer and Kilowog are guests on the latest episode of Young Justice! Thank you so much @Greg_Weisman and @BrandonVietti for giving me and @jim_krieg a chance to write this episode! #GLTAS #GreenFanterns pic.twitter.com/3s8DYqNUS2

The first thing that strikes me about “Encounter Upon the Razor’s Edge!” is the character of Razer. We’ve never seen him before or gotten any context for his bond with Kilowog, yet he’s introduced and portrayed like an established character. Some research (AKA scrolling on Greg Weisman’s Twitter) revealed that Razer is a character from the short-lived Green Lantern animated series. This is a bizarre choice, bringing in a character from a mostly forgotten, decade-old show. It’s bold to make him such a big part of the episode’s story, and ultimately, it works great. I love what they did with this character, and I want to know more about him. His story is the best part of “Encounter Upon the Razor’s Edge!” and that’s even more impressive, given I know nothing about him aside from what the episode offers. Razer was previously a Red Lantern fueled by rage, a path he set aside to take up the Blue ring powered by hope. His arc in this episode is about accepting that he has anger inside him while remaining hopeful that he’s more than just unbridled rage. I’ve dealt with anger issues in the past, and this was very cathartic; this is the first time they’ve made me cry this season. The music and animation in Razer’s scenes are amazing as well; the swelling score as he fights Metron is spectacular. The effect of his bichromatic aura with the two rings looks really cool. Young Justice regular Jason Spisak absolutely nails this character’s line delivery, and the dialogue is perfection. Spisak also portrayed the character in the Green Lantern series. I hope they check in with this character in the future; he would be far from the first in-and-out character for Young Justice. My only complaint with him is that it seems kind of dumb to let Metron get him worked up; it was obvious what he was doing. But sometimes, when you’re angry, logic just goes out the window. I’m also not really sure why he says the Foragers taught him to hope again when he’s never seen them before; it’s not like they do anything inspiring in this episode.

I like the framing of the story in “Encounter Upon the Razor’s Edge!” a lot; the story threads and character arcs are interconnected in a way that makes the episode very succinct and satisfying. We now have confirmation that Lor-Zod was the one who destroyed the Martian Zeta-tube, cutting Conner off from the Justice League. This episode contains many such revelations as the loose ends continue getting tied up. I watched this episode twice, and the second time, I noticed Lor say his parents were imprisoned for a millennium while his mother was unknowingly pregnant with him. This means that he came from the future like the Legionnaires, and in the show’s present day, the imprisoned Zod has no idea he has a son. However, present-day Zod does know about the El family, obviously, so I can only assume he’s manipulating Conner in the Phantom Zone. I like Lor’s design, voice (Phil Morris), and serious demeanor a lot. He’s like a less fun Killmonger, but I don’t mean that in a bad way. I’m really looking forward to seeing where they go with the Zods and Conner. Bring my boy home! Let him and M’gann have their wedding, dang it! 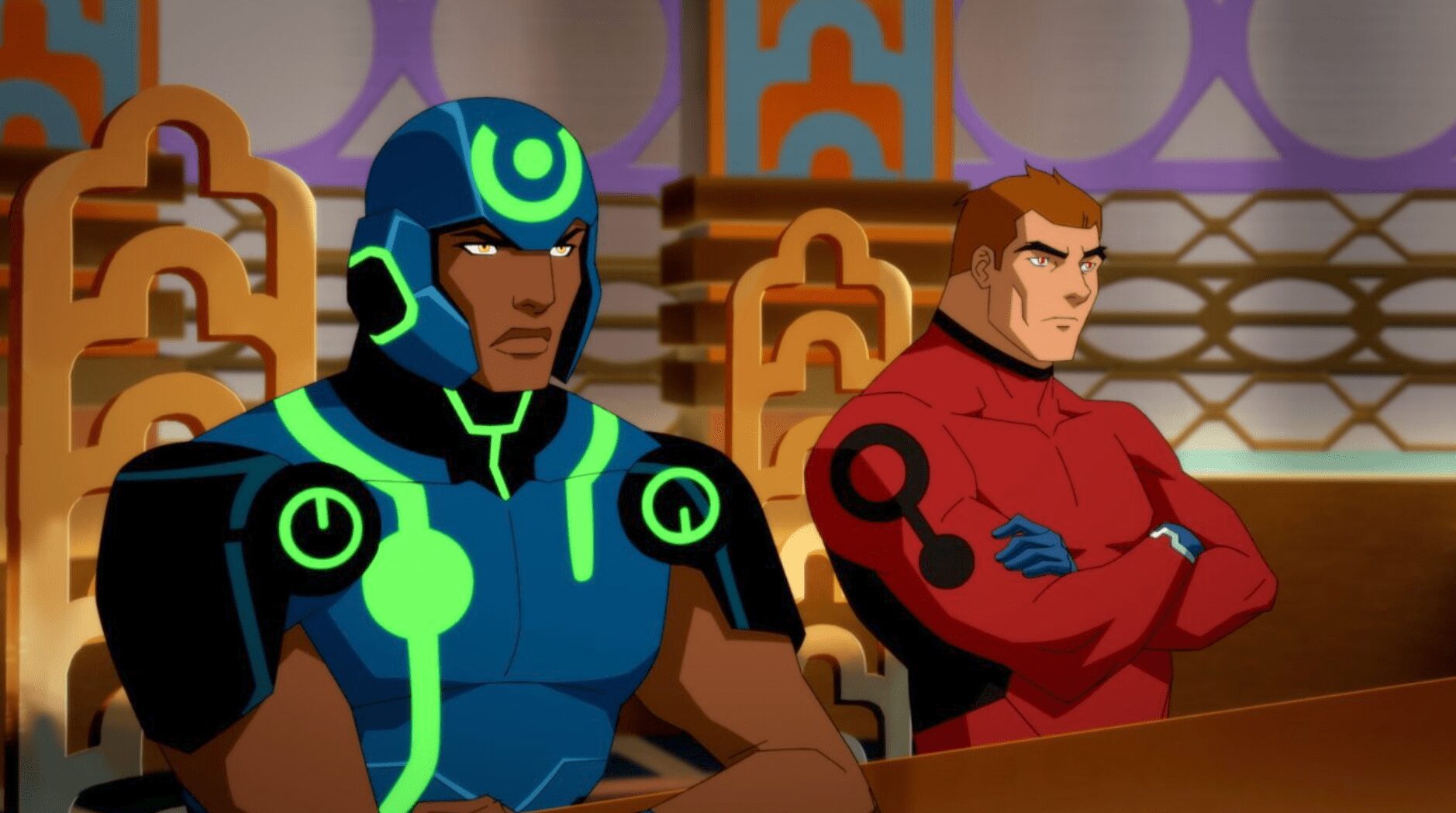 I’m still very interested in what they’re doing with Rocket/Raquel, and part of the reason is about to sound strange: she’s a jerk. So far, I don’t like her at all this season. From what I remember, Rocket was always a supporting character in previous seasons. Part of this season’s gimmick was supposedly bringing it all home and focusing on the core characters from season 1. I understand that they can’t exactly give Wally a story arc; sorry to the people who want him brought back, but he really is gone. They also gave Conner and M’gann a story arc together, freeing up yet another slot. Regardless, Young Justice has an expansive, rotating cast, and I don’t begrudge them for focusing more on characters like Zatanna or Rocket. I liked what they did with Rocket in “Beyond the Grip of the Gods!” and it looks like they’re going exactly where I thought with her. Another character remarks that she’s misjudging Orion based on his lineage rather than his upbringing and actions. We don’t even get much from Orion this week, mostly Rocket glaring at him from across the table and making demands of him and his people. Multiple times during this episode I wondered, “What’s her problem?” When she speaks to her ex(?) husband, she’s dismissive of every idea he or the school has to help her son. She never offers any of her own suggestions on how to educate him and help him adjust, but she won’t even consider the school’s offer of a classroom aide for Amistad. She merely comments that he would be ostracized for having this difference. Am I the only one who thought of how she treats Orion when she said this? For someone who so desperately wants to protect her son from the judgment of others, she passes judgment too easily. And I don’t understand saying she wants to help the boy but refusing to even discuss accommodations for his condition. Does she think she can argue Amistad out of having autism? However, I maintain that no matter how annoying Raquel is, this is good characterization. The story is highlighting her own prejudices and how they can harm her son, the person she loves most. It’s easy to see why she and the boy’s father are separated or divorced; she talks down to him, too. She always knows what’s best and won’t consider any outside viewpoint. It’s pretty bold to center an entire arc on such a short-sighted, hateful character who needs to rearrange her priorities and attitude. But if this goes where I think it is, it’s a stroke of genius. In the meantime, I’m having a great time.

"Encounter on the Razor's Edge!" is another solid entry in a pretty good season. I feel strange saying a brand new, relatively minor character is the best part and Rocket is the worst, but here we are.

Well, I’m not sure if I should advise you on watching the Green Lantern show or not to catch up on what happened in that. It’s HBO Max as well. It was a good show in my opinion, with new original characters like Razer and Aya, but I wish it wasn’t canceled too early. I loved learning about the different colors and how they worked. This inclusion threw me off and is very satisfying to see this continue on in this show.

Now what Bart has made is a cosmic treadmill. I’ve heard of it once and it says that this is a Flash’s way of controlling their ability to time travel. It releases radiation depending on where they’re running. Going forward, releases positive radiation, having them go to the future. Going backward, releases negative radiation and you get the rest. But the real question is what are they going to use it for?

So, I’m both right and wrong about Lor-Zod’s plan. He was born in the Phantom Zone, is trying to get his parents out, but the canister really did kill Conner and unexpectedly brought him to the Phantom Zone. Word is that Phantom Girl can travel to and from the Phantom Zone.

The two Legionaires with our main three during the backstory were Lightning Lad and Brainiac 5. I’d recommend watching the cartoon based on them as well on HBO Max so you can be clear on who.

Forager and Forager were somewhat adorable and don’t get me started on their birthday song.

Wasn’t that song a hoot? “Today is Flash’s birthday!” Thank you for the information. I may just have to watch GLTAS after this, and I’ll look into the other show as well.