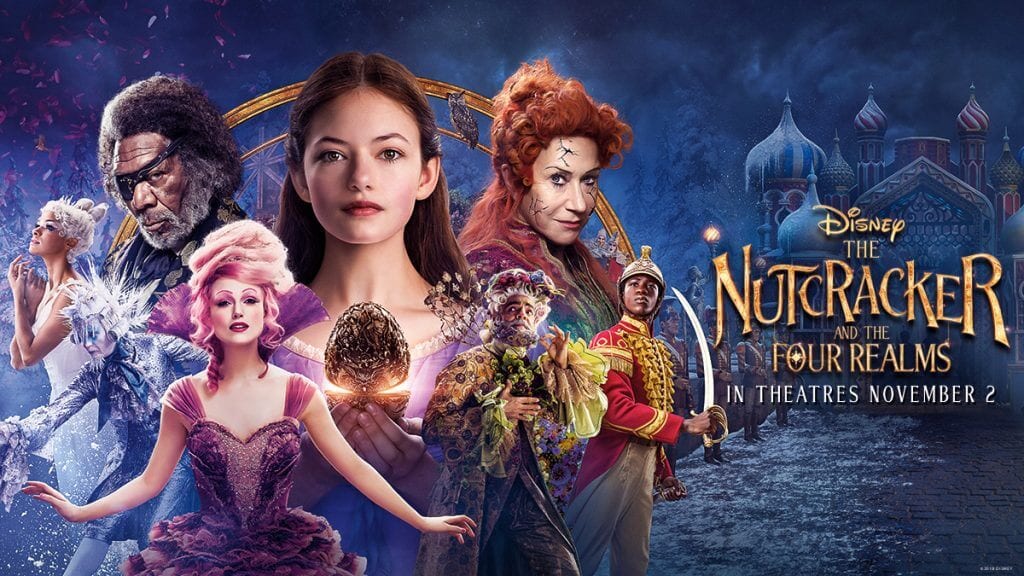 When I heard that Disney was making a movie based on The Nutcracker, I was a little worried. I’m no expert on the original story, but I’ve seen the ballet in person, and I willingly admit that I might still occasionally watch Barbie in the Nutcracker at Christmastime. Disney is my favorite thing, but the notion of them adapting either the short story or the ballet was hard for me to picture. I want to make clear that I’m not a cynical person in general, but particularly not when it comes to movies. I watch a lot of films and series made for children and families because that’s usually what I like; I love bright colors, inspired visuals, women in beautiful dresses and knights in shining armor. A Disney film based on the E. T. A. Hoffman story sounds like something that should be right up my alley, especially given that they use Tchaikovsky’s score from the ballet, much like in their animated Sleeping Beauty. Is The Nutcracker and the Four Realms a new Disney classic, or are you better off sticking to the Barbie movie? Let’s take a look.

The Nutcracker and the Four Realms takes character’s names, some vague story beats and famous iconography from the original story, and utilizes the score and some choreography from the ballet. The young Clara is crushed at the loss of her mother and feels as though her father doesn’t care. The family attends a Christmas party held by Clara’s godfather Drosselmeyer, and the pursuit of her gift leads Clara to the magical land of the Four Realms: the realm of sweets, the realm of flowers, the realm of snowflakes, and the land previously called the realm of amusements. Once there, Clara finds a key to open a locked box that her mother left to her, but before she can use it, a mouse steals it. Nutcracker Philip, Sugar Plum and everyone else warns Clara that Mother Ginger, ruler of the fourth realm, is an evil tyrant who wants to destroy all the realms and the master of the mouse that stole the key. Although reluctant at first, Clara resolves to help Sugar Plum get the key back and stop Mother Ginger. 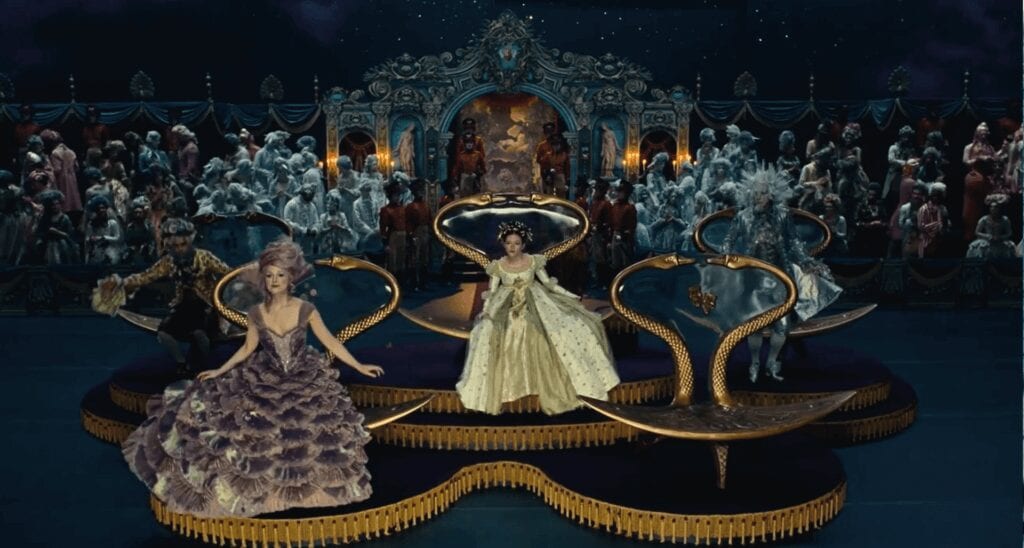 The Nutcracker and the Four Realms is an absolutely gorgeous film. I think using Tchaikovsky’s score was a wise decision, if a somewhat obvious one. One of the best sequences in the movie is the ballet performance when Clara first arrives in the realms, and I wish there could have been more of this. The practical effects and makeup are also amazing, and even the CGI mice and soldiers looked decent. As you probably know if you’ve seen the trailer, the costumes in this film are outstanding. They should definitely receive a nomination for one of the technical awards at the Oscars. I also teared up when Clara finally manages to open the box and “The Forest of Fir Trees in Winter” plays. I want to say, though, that the music got to me because it brought back memories of Clara and the Prince dancing to this lovely piece in other versions. Therein lies the problem with The Nutcracker and the Four Realms.

It’s difficult to form any kind of an emotional bond with any of the characters in The Nutcracker and the four Realms. Clara is the only one we really learn anything about, and while I don’t dislike her, I didn’t much like her by the film’s end either. I don’t fault Mackenzie Foy here; I think she gives a decent performance with the script at hand, as does the rest of the cast overall. But Clara’s emotional journey is pretty standard and uninspired here. The whole “everything you need is inside you” thing worked in Kung Fu Panda because of the execution and because I cared about Po. It also makes sense because that character was presented as a loser who had no skills and no self-esteem. It’s hard to accept that this is the revelation Clara needs because I don’t feel that I truly know and love her, but also because she’s obviously smart and beautiful and loved by her family. Why does she so desperately need to hear this? At the beginning of the film, she’s gleefully practicing science with her brother. She doesn’t seem like someone who doesn’t know who she is, and her sadness is easily attributed to the loss of her mother. 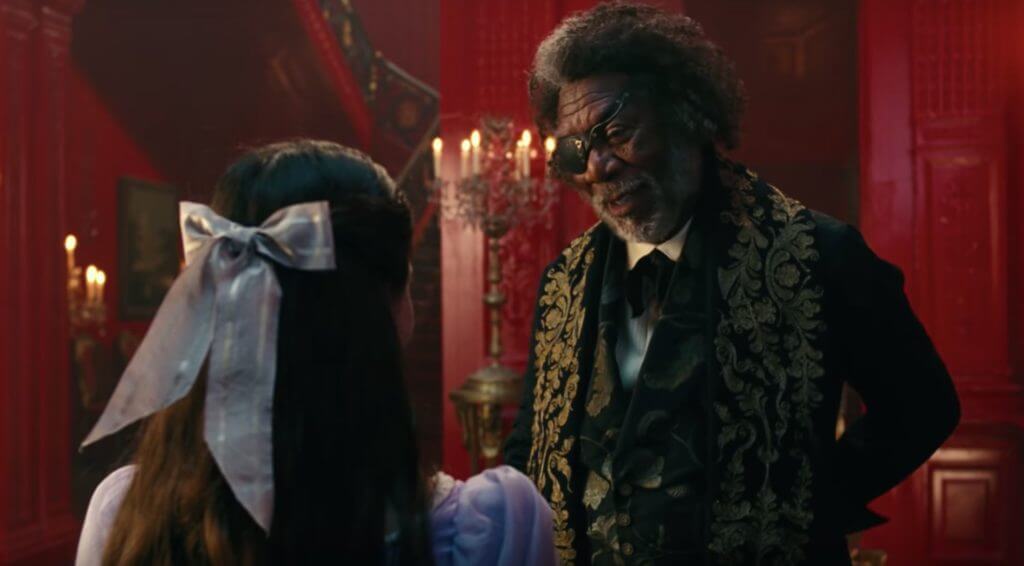 The other characters fare even worse: there was definitely some potential to tell us more about Philip, Sugar Plum and Mother Ginger, as well as Clara’s family members. The Nutcracker and the Four Realms runs an hour and 39 minutes, but it actually feels even shorter than that because it floats between characters and plot points weightlessly. It’s bad to bore the audience and drag something out, but it’s not a merit to rush through character introductions and resolutions either. Because all of the characters are one-dimensional and generic, their relationships – and, ultimately, the movie – are the same way. Clara feeling betrayed by someone she trusted, her final moments with Philip, and the resolution with her father at the end should all be big, emotional moments. THIS is when people should be crying. But the film fails to develop lovable characters and meaningful relationships, so the strongest emotion I felt during the movie was completely incidental, in that it reminded me of another adaptation of the Nutcracker story by accident. There’s a pretty big plot twist about midway through the film that also would have been more shocking if we knew the characters well enough to be shocked. As is, I guessed what would happen when a certain character was introduced and didn’t seem the way I expected them to be, but because we had barely met the other residents of the Realms I just accepted it rather than feeling any strong emotion.

The comedy in The Nutcracker and the Four Realms largely doesn’t work, but I have to say Keira Knightley is hilarious in parts as Sugar Plum. Her role is a tad ridiculous, and she just runs with it; she ends up being one of the more entertaining, memorable aspects of the movie. Helen Mirren tries and does a decent job, but they give this poor lady nothing to work with. Although Clara’s mother is only seen in flashbacks, one gets the impression from them, and from what people say about her, that she was a terrible favorite picker. Did she even like her kids, aside from Clara? Clara was her “greatest creation“? I know the movie wasn’t really about the other kids, but this made me uncomfortable.

I’m not sure why they chose to make a movie based on The Nutcracker instead of a completely new fairy tale film. Philip, our Nutcracker in this version, isn’t in the movie all that much, and like the other characters, isn’t a person so much as a golem for Clara. He follows her and does what she says, and that’s it. The moments between them that are meant to be sweet or build their relationship are sterile and hollow. It feels like he’s only present as a character so they could justify using the name. The roles of several characters are also changed quite a bit, and they made it much more of a conventional hero’s journey without the satisfying character arc. They also gave Keira Knightley’s character the name Sugar Plum, like that’s her proper name instead of the title of Sugarplum Fairy. In fact, while she is shown a couple of times to have wings and the ability to fly, there is no explicit reference to her being a fairy. The inexplicable decision to make Clara a Princess in the realms serves only to play into the usual Disney tropes and marketing. It feels like Disney just wanted an excuse to make another lavish live-action fairy-tale Princess movie with pretty dresses and impressive visuals. No complaint there, but one must wonder why they chose this story to do it with. The Nutcracker doesn’t really fit the Disney Princess model, so they essentially made a totally different story with a Nutcracker label. My guess is this will serve only to disappoint Disney fans and Nutcracker fans alike. Disney has been doing this a lot, actually; ever since the early 2000’s, it seems like the company has been searching for their own Harry Potter/Lord of the Rings-type fantasy series. It fails every time and usually just annoys their fans, but they keep doing it.

Overall, I don’t think The Nutcracker and the Four Realms is quite as terrible as some have been saying. It’s short and never boring, and the visuals and music alone are worth the cost of admission in my book. However, to me these aspects will always play second fiddle to character and story; Nutcracker suffers from paper-thin characters with uneven characterization and a story that doesn’t make sense and is nearly unrecognizable as the story or ballet audiences adore. I’m also a tad disappointed that it doesn’t really embrace the Christmas Spirit. It doesn’t feel like a Christmas movie at all, despite taking place on Christmas Eve, of course. I can’t fault the film’s technical aspects, but it fails as a Christmas movie, a Nutcracker adaptation, and one in a long line of Disney Princess films. It’s hard to say if this is a movie worth seeing in the cinema because it depends on what you’re looking for. The Nutcracker and the Four Realms won’t get you in the holiday spirit or present you with endearing characters. If music and lovely visuals are enough for you, I’d say go for it; otherwise, wait for Redbox.

The Nutcracker and the Four Realms

I don’t think The Nutcracker and the Four Realms is as terrible as some have been saying. It’s short and never boring, and the visuals and music alone are worth the cost of admission in my book. However, to me these aspects will always play second fiddle to character and story; Nutcracker suffers from paper-thin characters with uneven characterization and a story that doesn’t make sense and is nearly unrecognizable as the story or ballet audiences adore. I’m also a tad disappointed that it doesn’t really embrace the Christmas Spirit. It doesn’t feel like a Christmas movie at all, despite taking place on Christmas Eve, of course. I can’t fault the film’s technical aspects, but it fails as a Christmas movie, a Nutcracker adaptation, and one in a long line of Disney Princess films.