You Should Be Watching: Over the Garden Wall (2014) 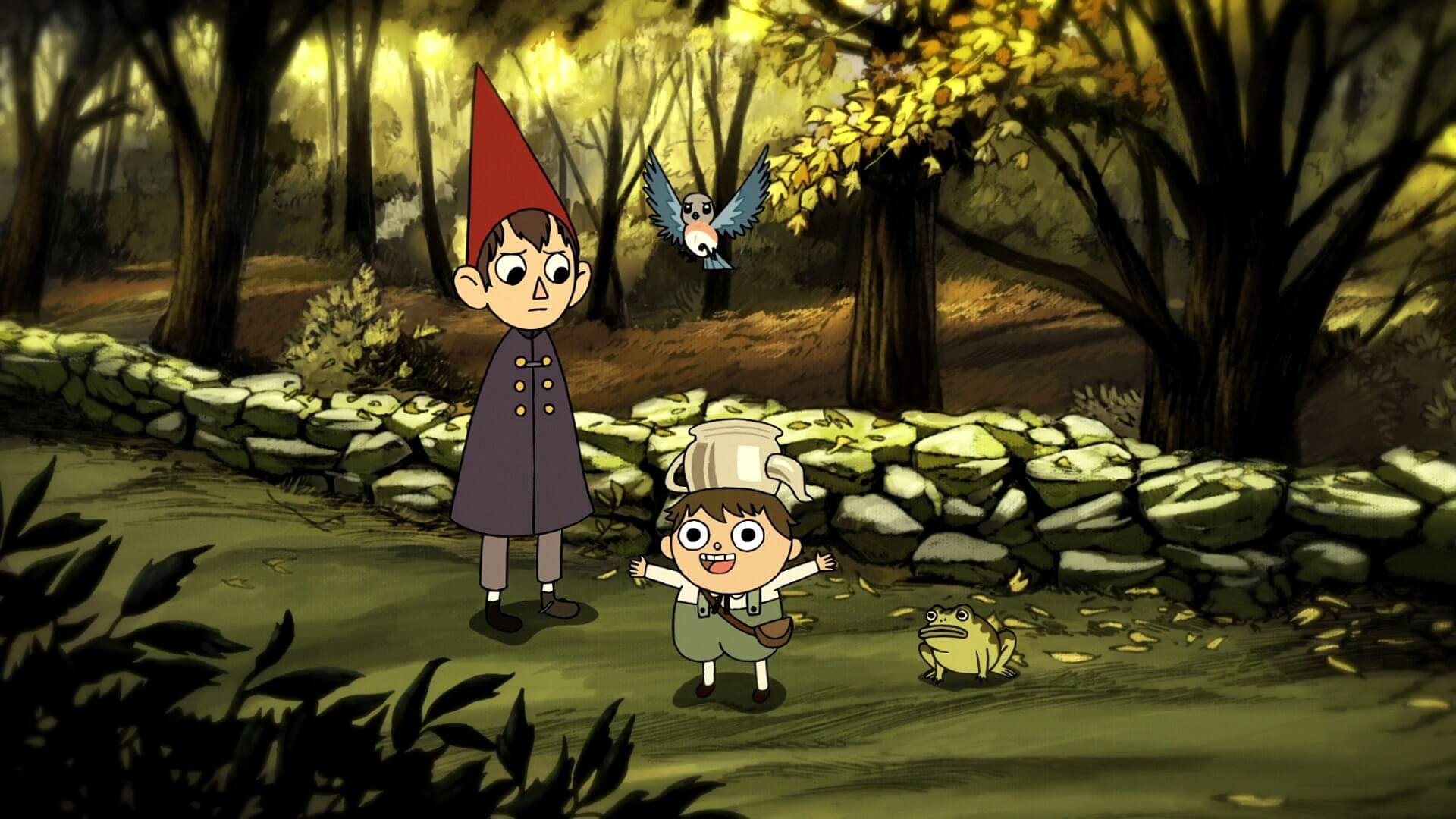 Welcome back to You Should be Watching, where I recommend a lesser known movie or TV series each week. This week we’re getting lost in the Unknown with Cartoon Network’s miniseries Over the Garden Wall. Inspired by the award-winning 2013 short film Tome of the Unknown, Over the Garden Wall was first aired in November of 2014 and tells the story of two brothers who get lost in the woods and the strange characters and adventures they find there.

In the Woods, Wirt and Greg meet a woodsman who must chop down Edelwood trees to fuel a magical lantern which he believes holds the soul of his daughter. They also meet a talking bird named Beatrice, a talking horse named Fred, a town full of pumpkin lovers, a tavern full of singing patrons and more on their journey. A mysterious figure known only as the Beast lurks in the woods, occasionally appearing and conferring with the Woodsman. The boys never know who they can trust as they make their way home.

Featuring the voices of Elijah Wood, John Cleese, Christopher Lloyd, Tim Curry and more, Over the Garden Wall features a modern but pleasant animation style. The music and costumes give the miniseries a mysterious feel, as it’s hard to determine exactly where or when events are taking place. There’s definitely a feeling of autumn, and I always like to watch this one in October. There are ten episodes in total, and each is only 10-11 minutes long. It aired two episodes a night for a week, but I usually watch it in one sitting because it’s less than two hours altogether. 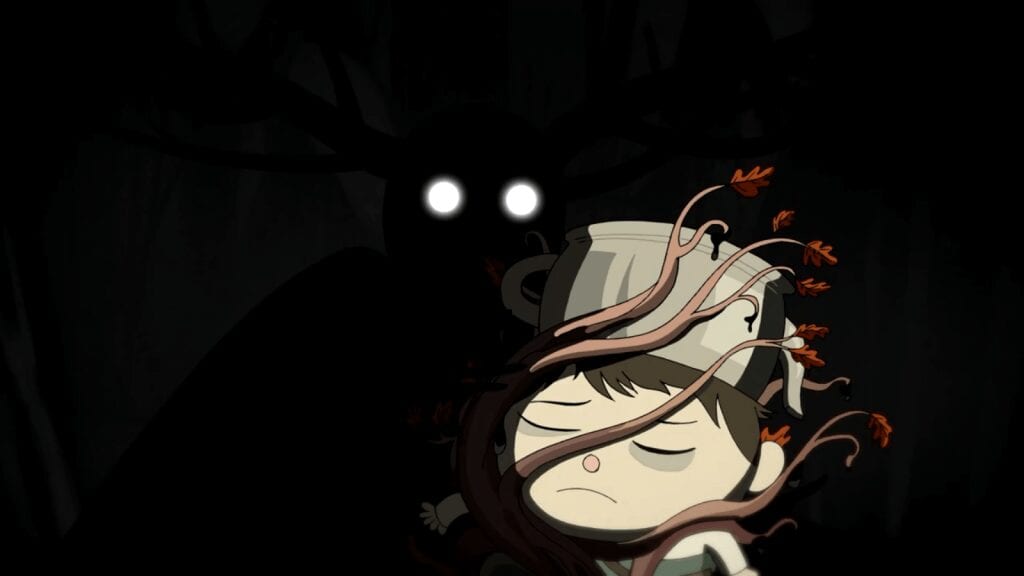 The voice acting in Over the Garden Wall is excellent. As previously mentioned, there are a few big names here, and they manage to provide delivery so convincing you’re never thinking about who plays the part. I have mixed feelings on this style a lot of newer cartoons strive for, with very minimalistic character designs and rounded edges, but here it kind of works. You could argue that this is the world as the boys see it, and Greg is a particularly imaginative kid. Things that are meant to be scary or mysterious are still very effective, and there’s a fair amount of “nightmare fuel” in here, particularly involving the Beast and a couple of other characters. I also really like the use of color in Over the Garden Wall. The music and songs are all original and composed by The Blasting Company. The songs are pleasant and quirky, and at times quite funny, and the musical score always plays perfectly into the mood of a given scene. The creative team really makes the most of the tools they have, creating an atmosphere that alternates between childlike wonder and pure terror.

Over the Garden Wall takes inspiration from a number of classic cartoons, from borrowing character design elements of Betty Boop to incorporating a sequence reminiscent of a number of 1930’s animated serials. Animation on the animals singing and playing instruments feels like something right out of Walt Disney’s catalogue of classic serialized cartoons. It’s also been theorized that the series draws inspiration from Dante’s Inferno, being that the protagonists go on a journey to various “realms” and have a companion named Beatrice. I think that one’s stretching it a bit, but it’s clear that the creators put a lot of thought into this series and it’s worth thinking about.

Over the Garden Wall is one of few shows I’ve seen that genuinely surprised me, and I mean over and over again. You really can’t tell which characters will ultimately be friendly to the boys and which pose a genuine threat. They use this to subvert audience expectations multiple times. I won’t spoil which episode or character it involves, but there’s one instance where the introduction is so creepy and unsettling you know they must have ulterior motives. Nonetheless, Wirt plays along with them, it’s revealed that they weren’t what he thought, and they ultimately turn out to be somewhat creepy but harmless. It’s also a big shock in the very end when you realize what’s going on, and even then, arguments can be made about a few things; they don’t spoon-feed an obvious resolution to the audience. 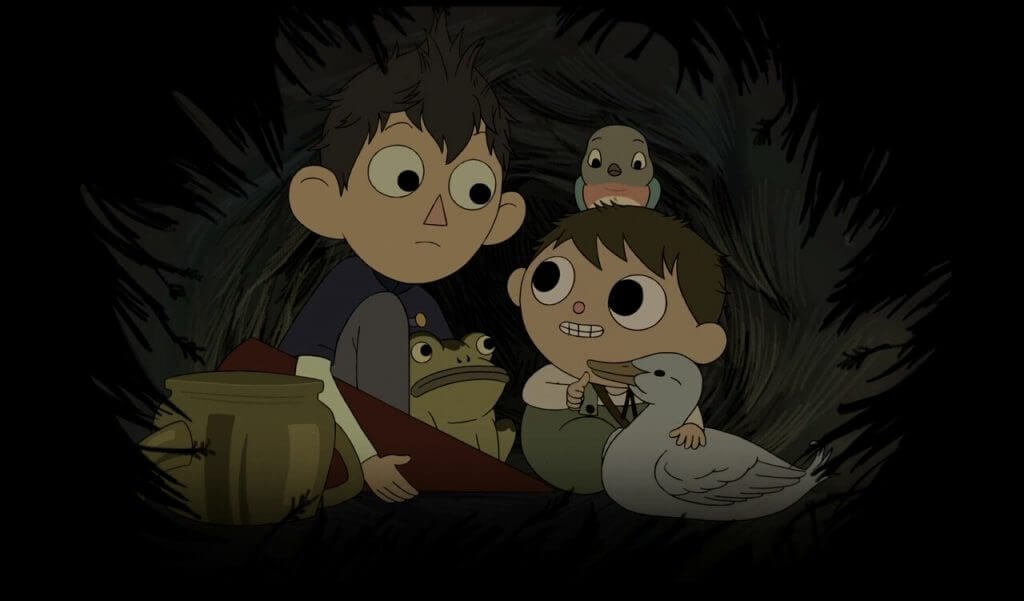 The characters in Over the Garden Wall are lovable, humorous and interesting. Wirt is a young boy going through his awkward phase and, as such, has some trouble expressing himself and explaining things to people. He can get frustrated with his carefree baby brother Greg, who just wants to eat candy, play games and have a good time. Beatrice is quite abrasive at first, and seems intent on picking fights with Wirt and constantly complaining. Her backstory doesn’t make me feel sorry for her, but it does explain a lot and it makes her behavior seem less outlandish. The Woodsman is possibly the most interesting character, and while I won’t reveal exactly what’s going on with him, Christopher Lloyd nails this role to a T. A hallmark of great voice acting is that you forget you’re listening to a performance and watching animated drawings, and that’s exactly what he achieves here.

In short, Over the Garden Wall is amazing. It’s funny, quirky, sweet, well animated, has lovable characters and unique music, and genuinely offers something different. It’s different from not only any Cartoon Network animated series, but any TV show I’ve ever seen. Every facet of the production shows how much care and time was invested in its creation. It’s not so often something genuinely original comes along, and Over the Garden Wall is one recent animated series that defies a lot of tropes and expectations of the medium. It doesn’t exactly subvert them, however, in the sense that it’s not meta; they’re not consciously and obviously attacking the norm, like, say, Shrek. Over the Garden Wall is sincere and sweet as well as unsettling and spooky. This is the kind of show I would have loved to watch around Halloween as a kid, and I feel like a kid again watching it now. The unique concept and execution, great voice acting and clever storytelling are why you should be watching Over the Garden Wall.