"Nobody messes with Vegas!" 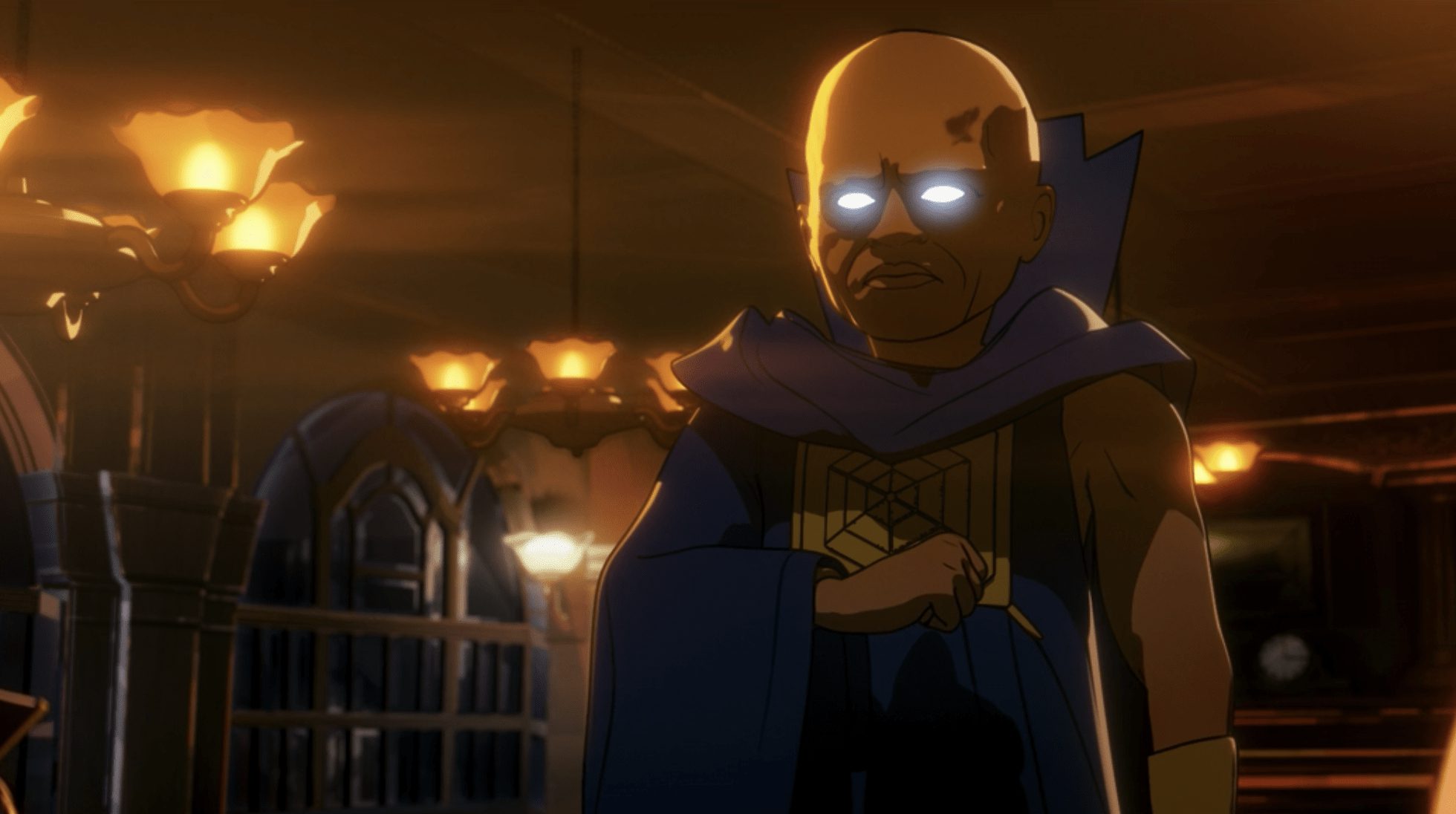 After an unexpectedly amazing setup last week, What If…? wraps up its frustratingly inconsistent first season with a frustratingly inconsistent finale. “What If… The Watcher Broke His Oath?” has some great moments and winning characters, but some lame jokes and annoying bits of pandering to offset them. Ultimately, there’s more good than bad, but you’re left with the gnawing realization that this could have been better.

With Ultron conquering the multiverse world by world, Uatu the Watcher plucks a team of heroes from their separate universes and charges them with saving existence itself. But even if they manage to stop Ultron, can they all be trusted to serve the good?

“What If… The Watcher Broke His Oath?” begins where you’d figure: with Uatu assembling his… Guardians of the Multiverse. Most of the expected characters are present – Captain Carter, Space Jesus T’Challa, Demonic Doctor Strange, Killmonger Panther. Frat Boy Thor is a surprise, and while he’s still annoying, at least he isn’t Captain Marvel. In fact, to my shock and relief, Carol Danvers isn’t among the cadre charged with saving the multiverse. And thank God for that because there’s enough pandering and social messaging this week as it is.

Essentially, all the characters from the good episodes remain entertaining and human, while the ones from the stinkers are obnoxious. For example, Captain Carter is still strong-willed and righteous but doubtful of herself and in pain because she misses Steve Rogers. One of my favorite little moments is Doctor Strange telling her that, in his world, Steve becomes Captain America, and even though she’ll never see it, she’s proud of him. Speaking of whom, Doctor Strange is still as full of himself as always, but he’s also trying to atone for the evil he unleashed on his own world, which gives stakes to a man with nothing to lose. Killmonger returns too, and he’s still pragmatic and untrustworthy, seeking out his own agenda as he agrees to save himself and his world. And, when she shows up, Black Widow is determined to make Clint’s sacrifice worthwhile, clinging to hope and a chance to settle the score with Ultron.

On the other hand, Space Jesus T’Challa is still grating, mostly because of how the writers treat him. Remember how his lousy episode ended with the implication that Ego was going to consume the galaxy because Peter Quill wasn’t there to stop him? Well, they immediately backtrack on that by having T’Challa show up at the fast food joint and mop up Ego in seconds. It’s a small scene, but it’s infuriating because they refuse to treat T’Challa like an actual character, instead deifying him more than the actual god in the story. And Thor is still a moron whose every line is a joke meant to remind you that he’s dumb as a post. And if that’s not enough, they throw in a version of Gamorra from a universe we haven’t even seen, one in which – I’m not kidding – she killed Thanos and now wears his armor and wields that big sword of his. This exists solely so that another woman can be on the team, and moreover, so Tony Stark can be passed over for her. I know this because after she’s chosen, she does next to nothing. And once the zombie dimension is involved, the hero used to face Ultron is Zombie Scarlet Witch. I know it makes sense, but she’s there for all of five seconds and doesn’t even do much damage. Wouldn’t it have been more fun to see the Hulk punch him into next Tuesday? Again, we know why it went this way. Once the action starts, most of this stuff is, thankfully, over, but your eyes will get a cartwheel workout till then.

And let’s talk about that action. Last week’s season-best episode established a massive crisis (with apologies to DC Comics) that tied all of the previous, seemingly unrelated stories together, as well as turned Uatu into a real character rather than just a narrator. The payoff had to be epic, and in that sense, “What If… The Watcher Broke His Oath?” drops the ball a bit. Ultron doesn’t feel like the threat he was a week ago. This is the guy who killed Thanos (before getting all the Gems!) and kicked Uatu’s ass through multiple universes. I know he has to lose eventually, but he should pose much more of a threat than he does here. Of course, T’Challa steals one of the Infinity Gems from Ultron almost immediately because God forbid he ever be at some kind of a disadvantage. But even before this, Doctor Strange outfits the team with mystical shields that completely protect them from the full force of all six Gems. I know this is a beefed-up Lovecraft version of Strange, but should he be powerful enough to resist all of that indefinitely? That being said, the fight isn’t bad; there are some cool aspects to it, like Strange becoming more demonic as he uses more of his powers. And I was glad to see Black Widow get some payback for Clint.

There are also some neat payoffs to close out “What If… The Watcher Broke His Oath?” Trapping Killmonger and Armin Zola (who now possesses Ultron’s body) in a pocket universe is a good way of liberating their worlds from them, and it gives Doctor Strange a purpose now that his Earth is gone. I loved Black Widow’s ending; it turns out Uatu is an “in for a penny, in for a pound” type of guy and whisks her to the world where most of the Avengers had been eliminated and Loki had taken over Midgard. While her being able to knock Loki around like that is stupid, I like that she’s getting a second chance and that Uatu is open to giving it to her. But even better might be Peggy’s implied happy ending. She chose to go back to her world, to fight on knowing she’d never get the life she wanted – only to find that future may not be as bleak as she’d thought. What makes this even better is the music, with the slight rendition of Captain America’s theme song complimenting her discovery. I’m a sucker for happy endings, especially if they’re earned, and these ones are.

Like last week, I feel like the animation has gotten better. I may just be used to it, but I don’t think so. There weren’t any scenes in “What If… The Watcher Broke His Oath?” that took me out of the story because the animation was so awful. It’s still not great, but it’s nowhere near as distracting as it once was. However, some of the actors’ likenesses are still bad. Most of the returning players look good, but Batroc the Leaper shows up this week, and he looks absolutely nothing like Georges St. Pierre, despite being voiced by him. And the voice work is excellent. Everyone sounds like they should, and that’s another reason I think the animation has gotten better; there have been times when the odd facial movements ruined the performances for me. Lake Bell sounds just like Scarlett Johansson, to the point where I wondered if Bell was dubbed over quickly after Johansson’s lawsuit was settled. Her “showdown” with Uatu, in particular, was a great display of Bell’s and Jeffrey Wright’s abilities, with him reacting to her accusations with sorrow. These are two characters who know the pain of watching a world die and knowing you can’t stop it, and you believe both of their reactions to that. If the rest of the episode were this great, this could have been something special. As is, it’s just pretty good.

“What If… The Watcher Broke His Oath?” is an adequate but disappointing end to an uneven season. The voice acting is great, and there’s some excellent story and character work, but the action is underwhelming, and the annoying parts of the previous bad episodes return. The good aspects make it a worthwhile finale, but it’s hard to wish this weren’t better.

“What If… The Watcher Broke His Oath?” is an adequate but disappointing end to an uneven season. The voice acting is great, and there’s some excellent story and character work, but the action is underwhelming, and the annoying parts of the previous bad episodes return. The good aspects make it a worthwhile finale, but it’s hard to wish this weren’t better.

This was a good episode. Can’t get enough of Carter and her enthusiasm and I love her bond with Natasha. We may have found the Hydra Stomper, but it could be anyone in there ’cause a lot can happen over 60 years. We’ll be getting an episode of Gamora becoming the Thanos Killer in season 2.

Peggy and Natasha’s friendship was surprisingly effective for something that had about 30 seconds to establish itself. Maybe they feel like a natural fit in general, or it’s that they both care about Steve so much, albeit in different ways.