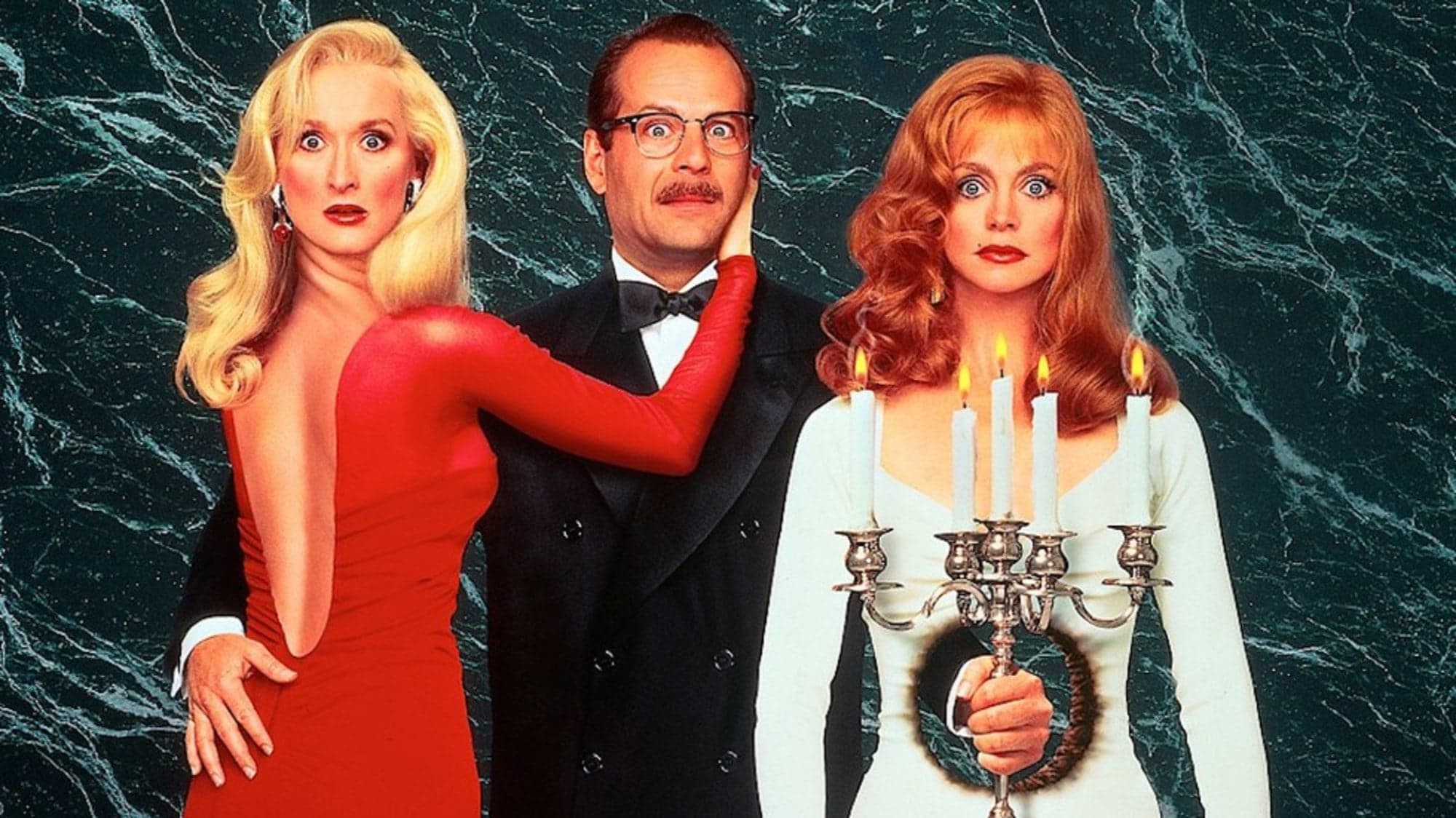 Welcome back to You Should Be Watching, where I discuss movies and TV shows that have been forgotten or overlooked. This week we’re becoming immortal with Meryl Streep and Goldie Hawn in Robert Zemeckis’ dark comedy Death Becomes Her. I first heard of this movie from a friend and thought it sounded kind of strange, but I really enjoyed it when I gave it a chance.

Death Becomes Her is about two frenemies, actress Madeline Ashton (Streep) and writer Helen Sharp (Hawn). Madeline always steals Helen’s lovers and humiliates her in any way she can. Of course, the two catty women pretend to be friends face to face, each well aware of the inherent insincerity behind their “friendship.” When Madeline marries Helen’s fiance Ernest (Willis), Helen gains weight and loses the last of her self-confidence. She becomes a frumpy cat lady who never leaves the house and obsesses over Madeline, eventually ending up in an insane asylum as a result. Meanwhile, Madeline has been driving Ernest crazy and struggling to remain relevant in her acting career. Years later they all meet again and chaos ensues. 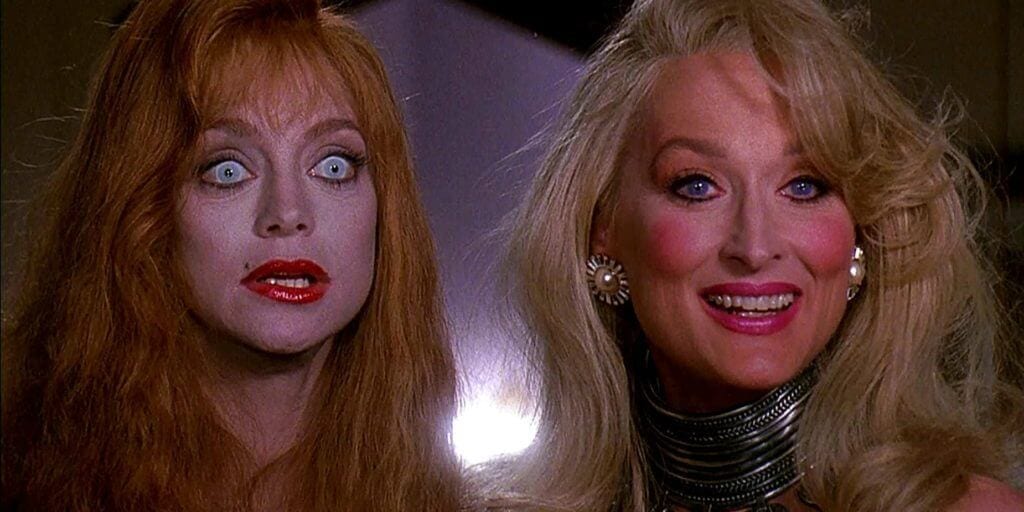 The great Alan Silvestri provides the film’s score, and it’s very distinct and humorous at times. The movie’s tone and visual language are also very unique and over-the-top. While Robert Zemeckis is the movie’s director, Death Becomes Her feels quirky and dark enough to remind one of Tim Burton’s work. I love the costuming of the female characters; they look beautiful but outlandish, which also contributes to the film’s otherworldly aura.

One thing that really makes Death Becomes Her stand out to me is the cast and how they play their roles. Bruce Willis is very much the highlight here, disappearing completely into a totally off-type character. Ernest is high-strung, spineless and absolutely hilarious throughout the film. He starts out slimy and despicable but ends the movie as easily the most likable character of all. I don’t normally care for Goldie Hawn, but she’s also pretty funny in this one. Her hatred towards Madeline is sympathetic and almost understandable at first, but things get crazier as the movie goes along, until she literally asks Ernest to kill her. Madeline changes the least throughout the film, but the sheer pettiness Streep imbues in her keeps her interesting. It’s strangely satisfying when the two women apologize and become friends, something I genuinely didn’t expect (or necessarily know I wanted) from the beginning. I also love Isabella Rossellini in this. She only appears a couple of times, but she looks great and does a good job nonetheless.

The rivalry between the two women is the driving force behind the plot of Death Becomes Her, and the two of them are deliciously ridiculous. The interplay among the three leads is interesting and develops unexpectedly throughout the film’s runtime. The sympathy of the audience also floats around as alliances and circumstances change. By the end, I can imagine some not liking any of the characters. Personally, when I first saw Death Becomes Her, I liked Helen and initially thought she would be the sympathetic party. Ernest is the only one I ended up liking, but I enjoy laughing at the women and their childish feud. Ernest is also the only one who learns anything from the events of the film. 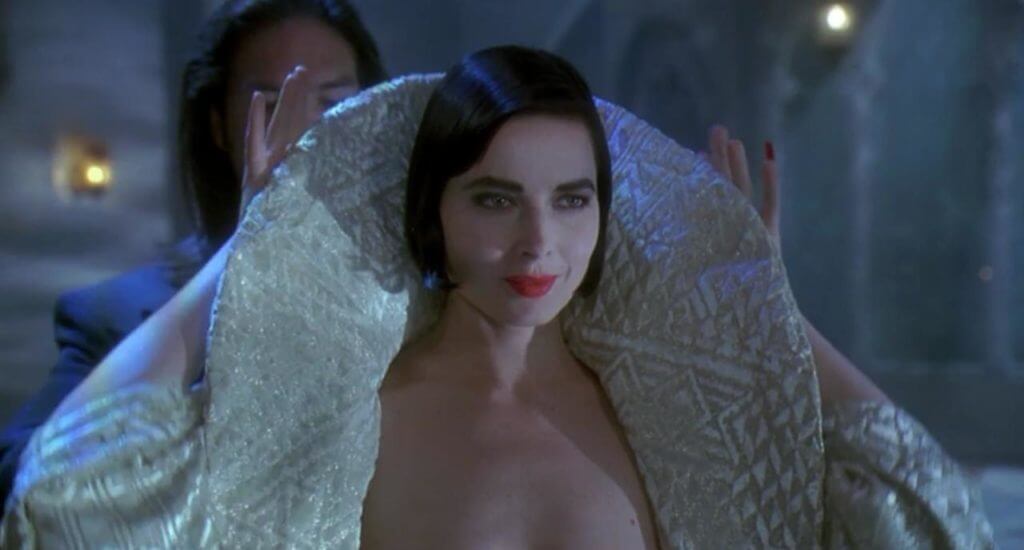 Despite its insane premise and over the top characters, Death Becomes Her does a great job of balancing its tone. The story is played straight for a decent amount of the time, with moments of hilarity interspersed throughout. It also gets really dark at times, in contrast to the film’s more madcap elements. Death Becomes Her has a lot of witty dialogue, with Madeline and Helen breathing fire back and forth. Because both of them are petty and duplicitous, a lot of this is said behind each other’s backs or to Ernest. Speaking of Ernest, he also gets some great one-liners, both funny and serious.

Death Becomes Her has a theme of immortality and what that actually means. It’s not executed perfectly in the sense that it isn’t really at the forefront of the film; it mainly surfaces when Ernest is offered immortality, and in the very end at the funeral. This isn’t a movie that’s overly concerned with complicated characters and well-examined themes, but what is here is pretty good. Of course, the theme of immortality is hardly a revolutionary topic to explore in a movie; however, I tend to care about creative execution as much as, if not more than, creative ideas. Both of the aforementioned scenes are powerful, memorable and highlights in an already very entertaining film. 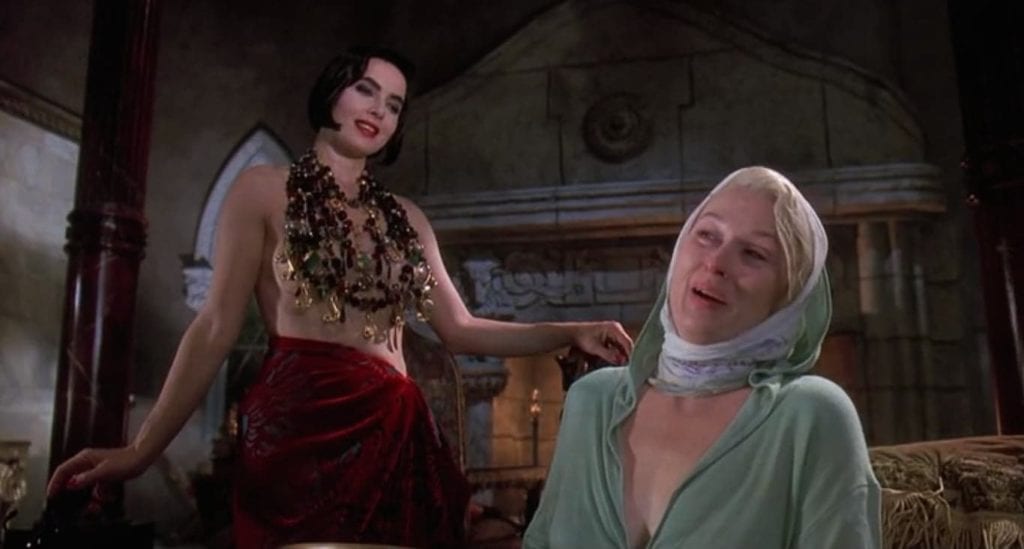 Aside from this theme, however, Death Becomes Her is a wildly original film. I can’t believe this isn’t based on a book because it’s exceedingly rare I come across movies that feels so fresh. Usually, when a film is something really outside-the-box, it ends up being an adapted book or play, or in some cases a remake. I’m quite impressed with this movie and the way it examines the competition between women and the obsession with appearance. At the time of its release, Death Becomes Her received mixed reviews, though it rightfully won the Oscar for visual effects. It is a rather strange movie, and I’m not entirely sure who the intended audience is. I’m sure that has something to do with the reviews at the time, and how infrequently people talk about it. I definitely think it deserves another look, and a lot of times movies that don’t have a defined audience are my favorites.

All things considered, Death Becomes Her isn’t a perfectly made movie, but it is an insanely entertaining one. It explores interesting concepts and themes with slapstick comedy and impressive performances. This movie is well worth watching for Bruce Willis alone, but overall, the madcap humor, unconventional tone and clever premise are why you should be watching Death Becomes Her.