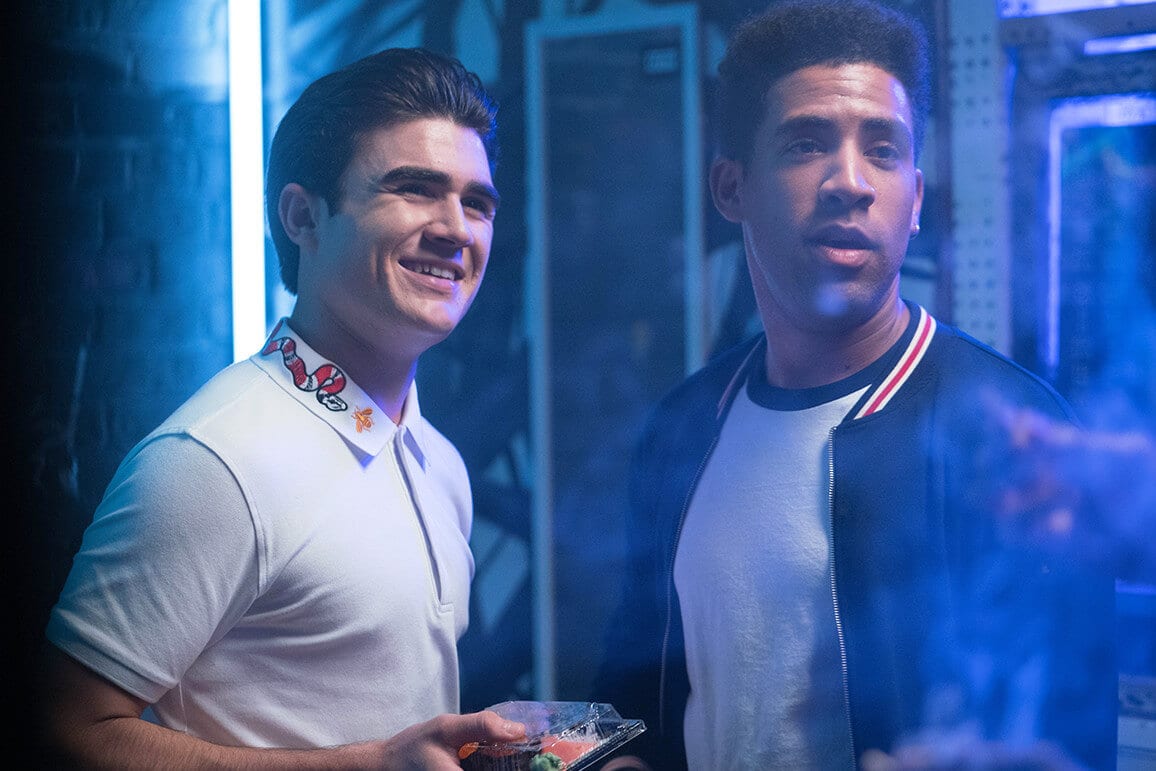 I get excited whenever a movie uses rap music as part of its story. It’s a great opportunity for two of my favorite art forms to come together and possibly create something amazing. This doesn’t always happen, though; depending on how they mesh, it can be a total disaster. The new Netflix original movie The After Party happens to be one of those disasters.

The After Party follows an aspiring rapper named Owen, and his best friend/manager Jeff. During one of Owen’s live performances, everything goes wrong, causing him to go viral. Realizing that his chance to get a record deal is most likely gone, Owen decides to take his life in a different direction. Jeff still believes in him, though, so he does whatever it takes to get Owen one more chance to get signed.

The story of The After Party just isn’t that good. It can barely justify its 90-minute runtime, which should tell you exactly how little is going on here. In order to fill time, a lot of the movie doesn’t even focus on Owen trying to get a record deal. Instead, a lot of The After Party is actually about Owen trying to have sex with Jeff’s older sister, Alicia. It’s a distraction most of the time, with some okay scenes between Owen and Alicia happening in the third act. I only wish they’d spent a bit more time on Owen’s rapping because when he is actually given the chance to rap, the movie is very enjoyable.

The characters in The After Party aren’t much better. Owen is interesting because he’s not what most people would classify as a typical rapper. He doesn’t rap about drugs or money, and has no desire to do that so he can fit in with his fellow rappers. Jeff, on the other hand, is terrible. He is the typical friend who tries to act more “hood” than he is to be cool. It’s clear that he really wants to help Owen get a record deal, but his methods are highly questionable. Alicia is very bland. More than a character in her own right, she’s a plot device that helps get Owen to certain places so the movie can progress. She has no real defining traits about her, which makes that whole plotline impossible to become invested in.

The acting doesn’t do The After Party any favors either. This is especially true for Harrison Holzer, who plays Jeff. There are plenty of attempts to make jokes about Jeff, but none of them are funny. Nothing feels natural coming from him, and while that might be the point, it doesn’t make any of the jokes land any better. Something that surprised me was how well Kyle plays Owen. For those who don’t know, Kyle is a rapper. Getting a rapper to play your lead character isn’t typically a smart move, but Kyle is actually good. Owen is a socially awkward guy, which I’m pretty sure reflects Kyle’s own personality. Kyle also nails the scenes where Owen has to rap. Aside from the rap at the very beginning of the movie, I very much enjoyed all of the other performances. The rap he does about Jeff near the end is easily the best moment in the entire film.

The After Party tries to compensate for its lack of content by stuffing the movie with as many cameos from famous rappers as it possibly can. Rappers like Wiz Khalifa, French Montana, Jadakiss, DMX, Tee Grizzley, Desiigner and Ski Mask the Slump God all show up at some point. They’re accompanied by other well-known personalities like Charlamagne the God and Angie Martinez. I will admit that some of these cameos are actually pretty funny, but in the long run, they did nothing to hold my attention. This is a gimmick that gets played out very fast.

All of these cameos do mean good things for the movie’s soundtrack though. If you’re a fan of contemporary rap music, then you’ll likely love the soundtrack to The After Party. I was definitely jamming when certain songs came on. A few of the cameos are the rappers performing their own music. I was caught off guard a few times because there are songs I honestly did not expect to hear in this type of movie.

Director and Screenwriter Ian Edelman has some explaining to do. The After Party isn’t a poorly shot film, but the writing is mostly disappointing. The story about Owen trying to get a record deal is forgotten whenever the story about Owen trying to have sex with Alicia pops up. There’s never any real balance between the two plots, which makes the movie seem like it has an identity crisis. There’s also a big part of this story that makes very little sense. We see Owen essentially give up on his dream of becoming a rapper after a video of him vomiting at one of his performances goes viral. Jeff later tries to use that publicity to get him a record deal, only to be shot down time and time again. Is this writer not paying attention to what’s actually happening in the music industry right now? People who go viral are the ones more likely to get record deals.

Overall, The After Party really misses the mark. I can’t say I hated the movie because there are aspects I did enjoy. I think Kyle is great in the lead role given his lack of experience. Some of the jokes do land, as long as they have nothing to do with Jeff. Telling a story from an aspiring rapper’s perspective is important, and the way that lifestyle is portrayed is pretty depressing. I just wish they focused more on those themes. But these small positives do very little to outweigh the massive flaws in The After Party. The characters are instantly forgettable. The directing is nothing special, and the writing is mostly terrible. Everything about Jeff’s character is an absolute failure. The cameos are cool at first, but it’s clear that they were nothing more than a crutch for a film that had problems filling time. There are so many better movies on Netflix that you can watch. I can’t recommend this to anyone.

The After Party is a mediocre attempt to tell the story of a struggling artist. The many rappers that cameo in the film do nothing but show how hallow this film really is.