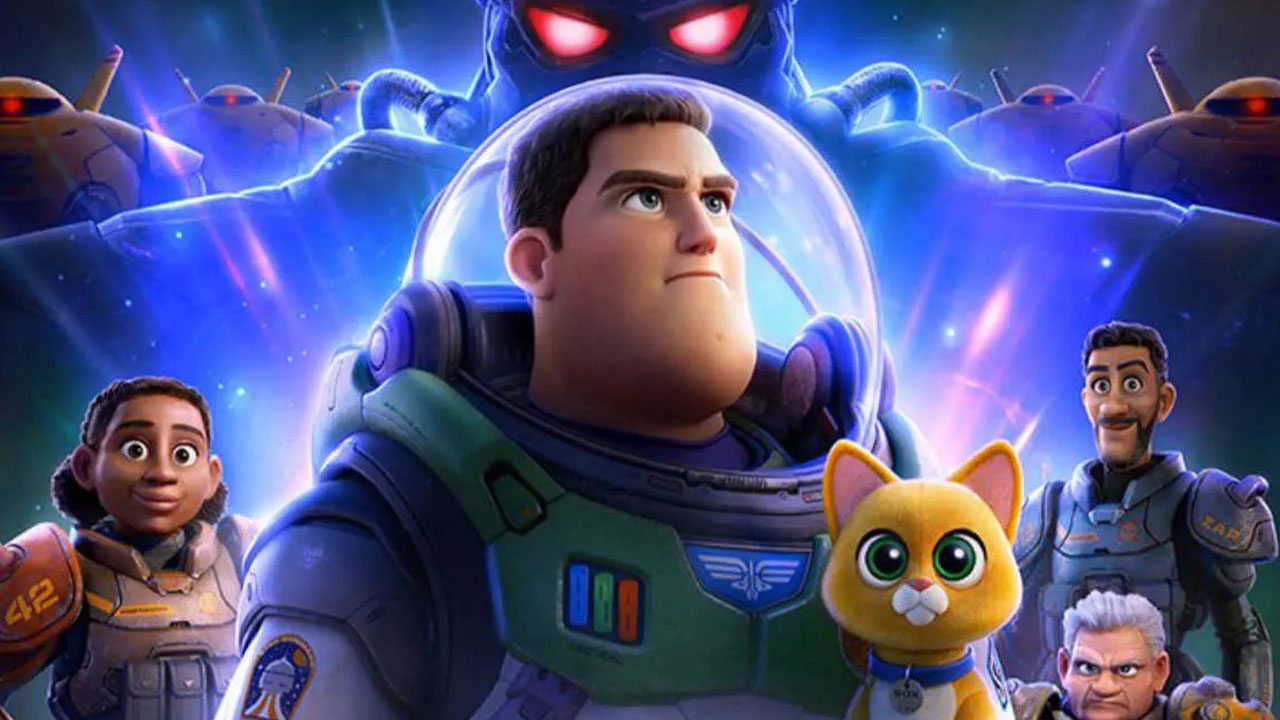 From the initial announcement of Lightyear, I’ve been critical of this movie’s existence. Think Obi-Wan Kenobi, only worse; there was an easy, clearly defined story with Obi-Wan waiting to be told. They just chose to waste time on a galaxy-trotting rescue mission instead. With Lightyear, in my estimation, there was no story. Following the massive success of the first two Toy Story films, we already got the spin-off Buzz Lightyear of Star Command, the arguably unnecessary Toy Story 3, and the undeniably unnecessary Toy Story 4. The former already explored Buzz’s “real adventures” in the form of a movie and Saturday morning cartoon Andy would have watched. Toy Story 3 ended the story of the boy and his toys, and 4, for me at least, destroyed this franchise. I’ll always love the original film, and the second one is my second favorite Pixar movie of all time. But Toy Story 4 contradicted the series’ prior themes, saw Woody go against everything he previously believed, and destroyed any interest I had in more content. With that being said, I’m still a lifelong fan of Pixar and this franchise; there was never any chance I wouldn’t see this movie, even if just to review it. Was my skepticism unwarranted? Is Lightyear the sci-fi family adventure of the summer or yet another unworthy, unwarranted attempt to revive a franchise well past its prime? Suit up, baby, because we’re going to infinity and beyond!

Lightyear begins with a small opening crawl explaining that this was Andy’s favorite movie and what inspired him to want the Buzz Lightyear action figure for his birthday. The story kicks off with Buzz (Chris Evans) being awakened from hypersleep to pilot the enormous ship and test the viability of life on a strange planet. Prospects seem bleak, so they return to the ship, but rather than making a clean escape, Buzz crashes the craft, and everyone is marooned until he can figure out how to get them home. He begins testing flights back to Earth and soon realizes that for every few minutes he spends in his ship, years pass on the new planet. His best friend and commander, Alisha (Uzo Aduba), gets married, has children, and passes away while Buzz works on getting home. After a total of 62 years have passed, Buzz must face down his greatest adversary yet in Zurg (James Brolin) with the help of Alisha’s granddaughter Izzy (Keke Palmer). 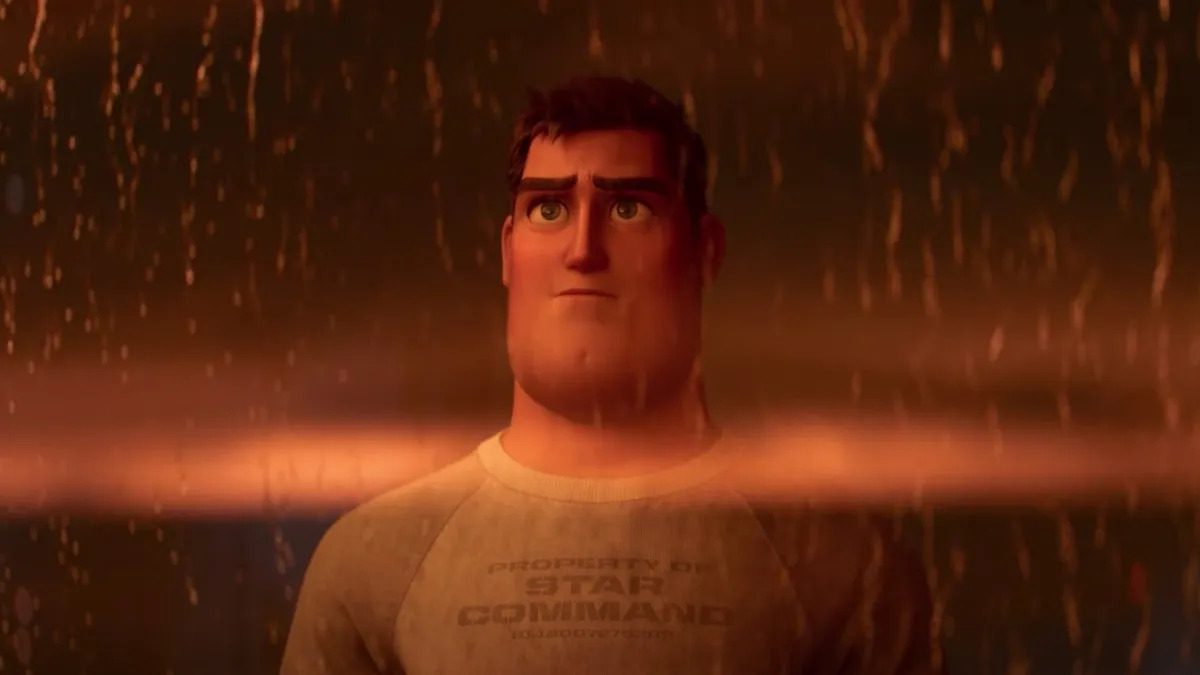 This movie is glorious to behold on a technical level. The animation is just as crisp and immersive as you’d hope, and the artistry on display is stunning. I like the character designs, especially on Buzz; he’s a perfect mixture of his original toy design and humanizing elements for believability. The environments are breathtaking and inspired. There’s a wide shot of some of the plants on the planet that could be hanging in a museum somewhere; just beautiful. The textures on hair and clothes are quite detailed and believable. The movie’s original score by Michael Giacchino is serviceable and exciting but not memorable outside of the film. Lightyear is cleanly edited, and the sound design is flawless. The movie thanks NASA in the end credits. I don’t know anything about NASA or space travel, so per my husband, who loves everything to do with space: “they got the idea of light-speed right; time passes more slowly for you than everyone else. They got deceleration from hyperspeed right. The heat on the ship from re-entering the atmosphere is shown accurately, as are the problems of weightlessness in space.” 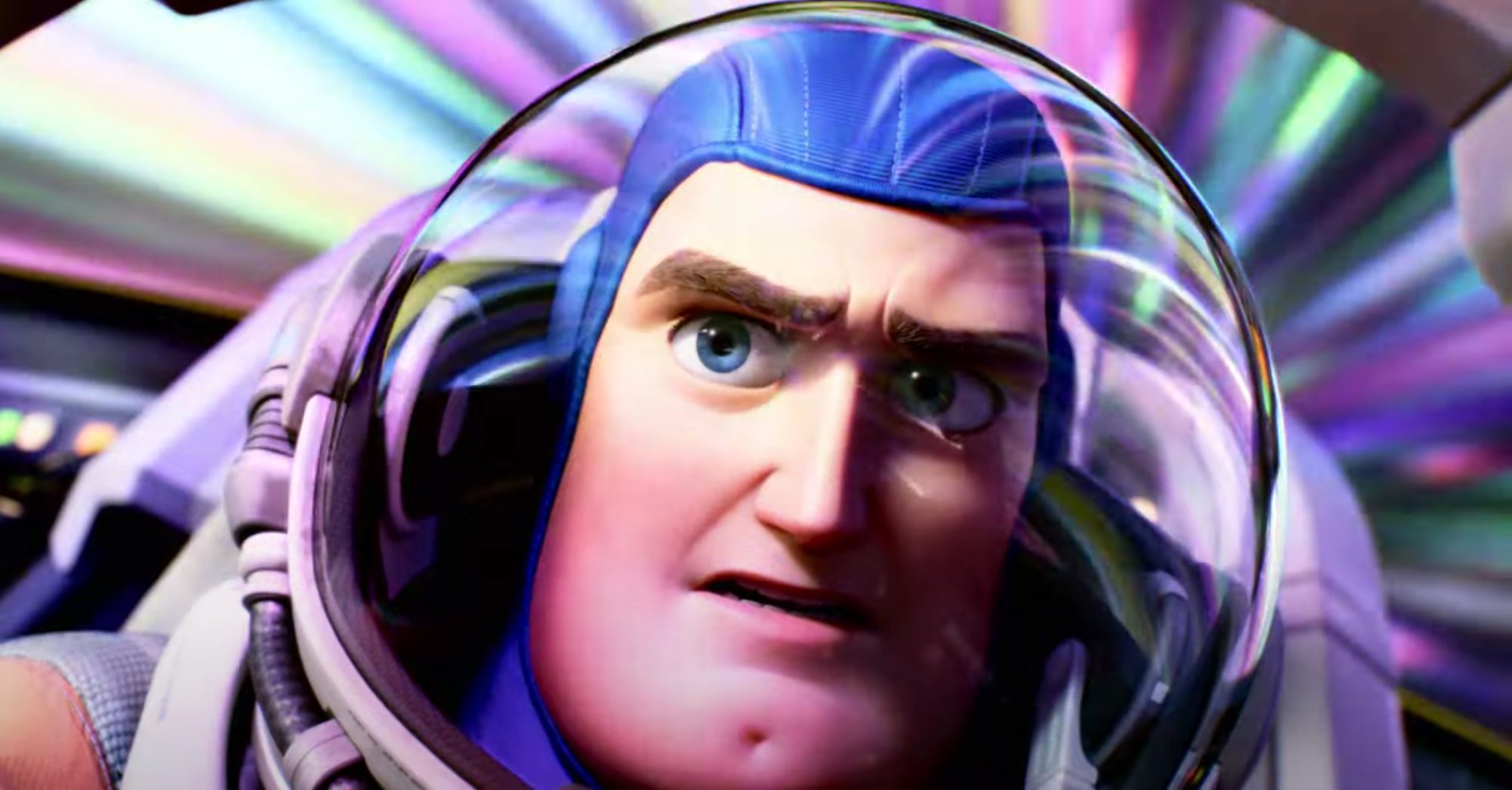 Lightyear is packed to the gills with Toy Story references. When Buzz first disembarks to check the ship’s surroundings, there’s a frame of his reflection in his helmet. This is a callback to his first scene in the original Toy Story, which itself is an homage to Star Wars. Izzy has a similar scene later on. Buzz’s dialogue as he explores the terrain is the same as his first lines in Toy Story verbatim; cue a whole new generation of “There seems to be no sign of intelligent life anywhere” memes. He also says some of Buzz’s one-liners and catchphrases, like shouting “Blast!” when something goes wrong. At one point, he asks Alisha if she’s mocking him; this is exactly what he asks Woody in the first film. His later confrontation with Zurg is a series of callbacks and references; he asks if Zurg is his father, a reference to an infamous Toy Story 2 scene which was another Star Wars Easter egg. Their fight is just like the one in the Buzz Lightyear video game the toys play in Toy Story 2, right down to the crystal chamber being reminiscent of the battery chamber in that scene. 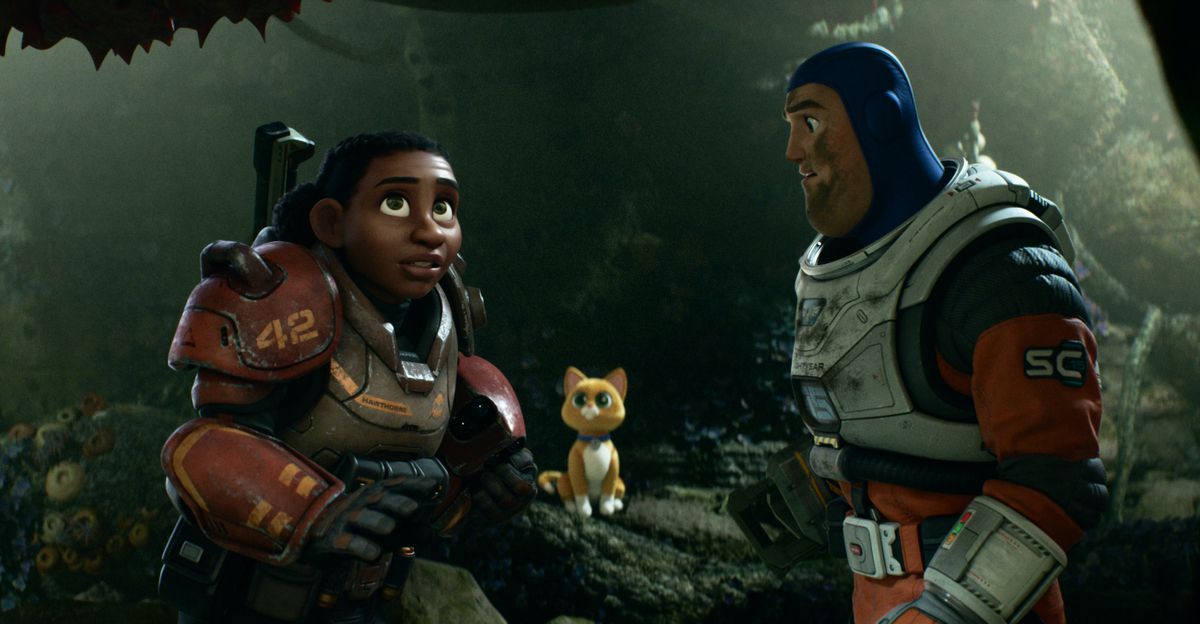 This movie’s message and themes are very classic Pixar right to the very end. There’s a mixture of “It’s okay to ask for help” and “Life is about the journey, not the destination.” Buzz gives a lot of Mr. Incredible vibes early on, constantly insisting that he can do things alone and doesn’t want assistance or companionship. I agree with the idea here; we all need help sometimes. I believe that we fundamentally need each other, both emotionally and in practical terms. This concept was handled so much better in The Incredibles that comparing the two is cruel, but I can’t help it; the characters even look similar! Buzz’s change of heart comes out of nowhere mere seconds after reiterating to Izzie that he can handle the situation by himself. This theme was baked into The Incredibles in nearly every scene; hell, the island is called Nomanisan Island. No man is an island. Brilliant. It’s not fair to compare most animated movies to that one, though. It’s a masterpiece in character and theme exploration, and this is the hill I will die on. The other concept is handled more satisfactorily and leaves the viewer a little sad. Buzz missed out on his best friend’s entire life because he spent it trying to get everyone back to Earth. Everyone else lived meaningful lives in their new surroundings, and Buzz missed all of it. The importance of life’s journey is a well-worn idea, but the execution is satisfactory in Lightyear and may even improve with repeat viewings. This concept has been explored previously in Cars and Up.

The dialogue is pretty good in Lightyear. Sometimes the references to the main Toy Story movies are distracting because they don’t come across as natural conversation, but it doesn’t ruin the movie. The marketing and interviews leading up to this movie got me interested in Alisha and Buzz’s friendship, and I wish we could have seen more of it before the tests began. I get that Buzz misses out on Alisha’s family and life; that’s kind of the point, so we miss out on it too. And I’m glad that neither she nor Izzie (who I really enjoyed) stole the thunder from the title character; Kenobi this ain’t, and thank goodness. But a couple more short sequences establishing their rapport before the crash/experiments would have done wonders here. Pixar has always excelled at emotional honesty and confronting difficult truths, which is a big part of why I love them. I would have loved to feel even more when Buzz realizes what he’s missed. I’m not satisfied with Zurg’s portrayal, but I don’t want to spoil the movie, so that may be an article unto itself. 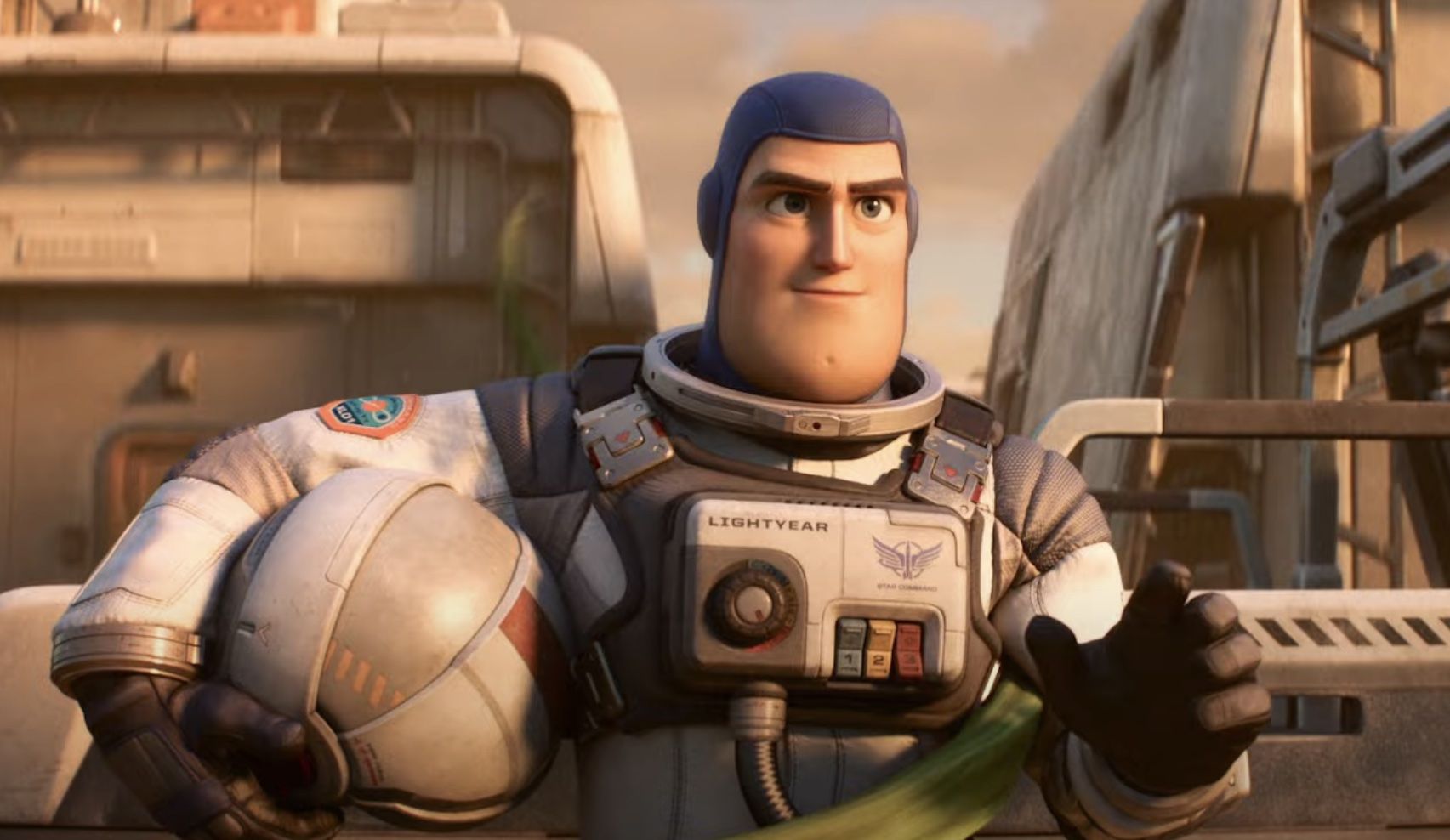 Overall, Lightyear isn’t perfect. It treads a lot of old ground that Pixar knows all too well and only justifies doing so part of the time. However, this movie is fun. It’s beautiful. It’s not the waste of time, slap-in-the-face to one of my favorite movie series I was expecting. After this one viewing, I like Lightyear better than the third and fourth Toy Story films. That’s not bad; nothing is going to top 1 or especially 2. This version of Buzz is also more interesting than the toy has been since Toy Story 2; Woody was always the most dynamic and interesting, but the third and fourth movies really had no idea what to do with Buzz. I would recommend Lightyear if you love Toy Story and this character. If you’re not a huge fan of Pixar and/or this series, I don’t think you’d lose any sleep over waiting for it to hit Disney+.

Lightyear falls into the middle of the pack among Toy Story films. It's beautifully animated, the story is better than I expected, and it justifies its existence, despite a few fumbles.

Great review! I’m glad it sounds like this movie will be a good one to watch, especially with my son (Buzz is a favorite to us both, though he also really likes Woody and Forky)! I was a little apprehensive about this film myself, as I am with all new Disney movies and shows, and Kenobi didn’t help at all. That said, I’ll still wait for the D+ release, theaters aren’t that great when I can get the same experience at home, pretty much.

Thank you so much for your thoughtful comment and for reading! I love going to the theaters but I can certainly understand saving money by waiting for digital release.

Awesome review! And here I have to respectfully disagree. Toy Story 3 is my fave movie in the franchise and my fave Pixar movie. Still, we tend to agree on most things! I didn’t mind Lightyear. Thought it was pretty good.

I like Toy Story 3 much more than 4 but still less than 1 or especially 2. Thank you for reading and commenting!

I’ll never see this movie. Disney doesn’t get to tell me whe to have “the talk” with my kids.