"The point isn't to push the bad stuff away. It's to make room for it, live with it." 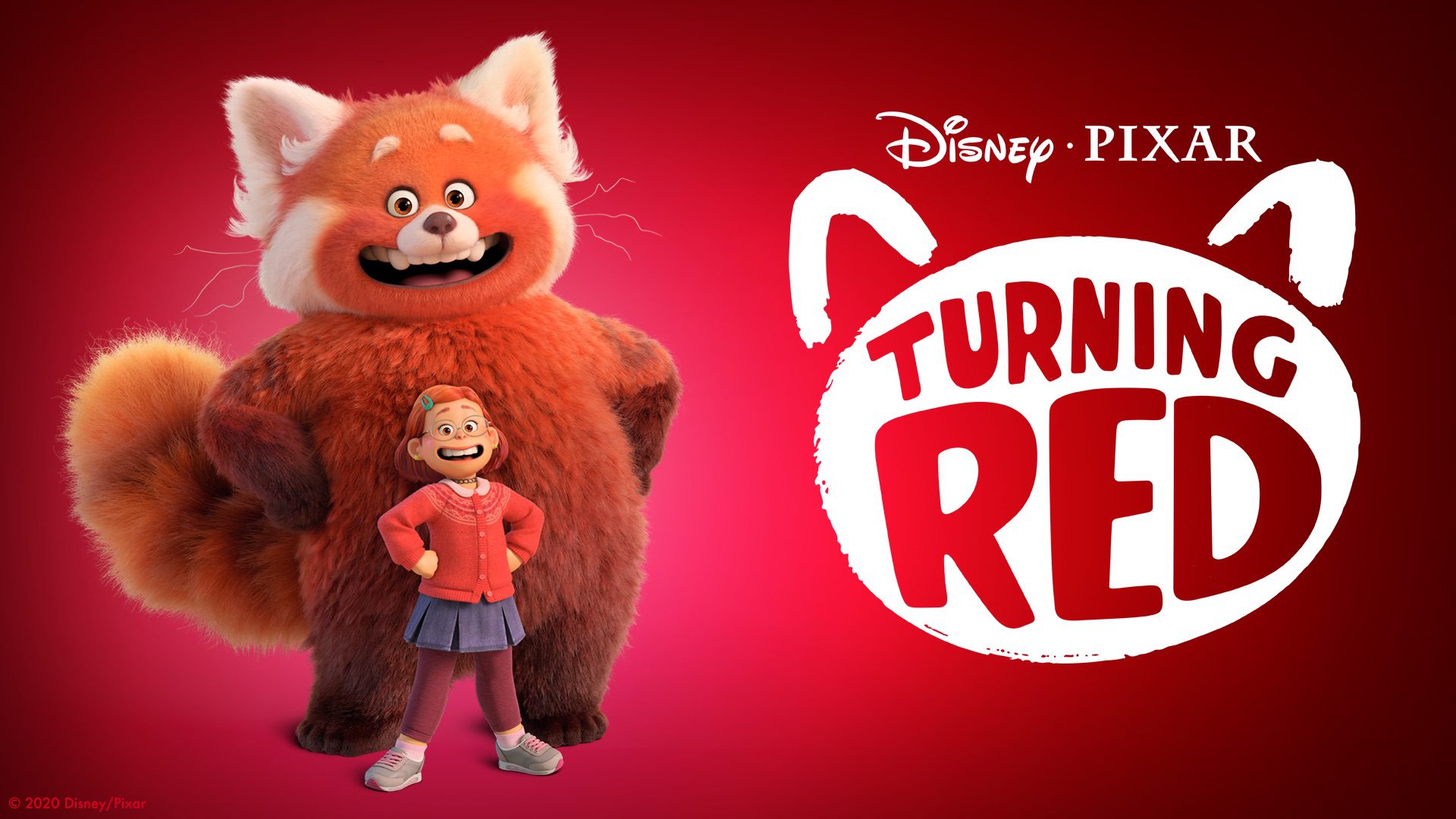 Pixar used to be my favorite thing in the whole world. They’ve produced some of my favorite movies, and I actually wanted to be an artist there when I was a kid. I still think the legendary studio is capable of greatness, but they’ve let me down a lot in the past few years. However, I’ve tried to be optimistic for Turning Red, the studio’s latest cinematic venture. After a less-than-stellar marketing campaign, the movie was released for free on Disney+ yesterday. The film is directed by Domee Shi, Pixar’s first female solo director since Brenda Chapman was shafted off her own creation, the studio’s Brave. Shi previously brought us the short film Bao, which played before Incredibles 2 and was surprisingly better than the movie. All this being said, though, the ads for this film didn’t inspire hope in me. The use of “It’s Gonna Be Me” by NSYNC in promotional materials soured my outlook on the film somewhat. Furthermore, the comedy and animation style weren’t very classic Pixar. Is Turning Red a glorious return to form or yet another in a series of blunders for the formerly great studio? Let’s jump in.

Turning Red is a coming-of-age story following Meilin Lee (Rosalie Chiang), a Chinese-Canadian girl whose life irrevocably changes when she turns 13. Set in 2002 Toronto, the film sees Meilin redefine her relationship with her controlling mother (Sandra Oh) after a family curse takes hold of her, turning her into a giant red panda anytime her emotions swell. The previously timid, restrained girl jumps at the chance to attend a big concert with her friends despite her mother’s wishes, and the two clash for the first time ever. Can Mei complete her journey of self-discovery without alienating her family?

This movie has only been out for two days, but the big complaint I’ve heard is that it isn’t relatable. Personally, I have to disagree. I’m not Chinese, I’ve never been to Canada, and Mei’s taste in music is trash, but I found multiple elements of this film surprisingly familiar. I’ve struggled with being honest with myself despite my mother’s expectations, and it took me twice as long as Meilin to come to the correct conclusion. I’ve always found it bizarre when people say a story or character isn’t relatable because of where it’s set, the character’s gender, etc. For one thing, I don’t find people understandable based on their immutable characteristics. That’s limiting and displays a troubling lack of empathy. I’m not going to say someone is racist or whatever because they didn’t like a movie; that’s absurd and shuts down any legitimate criticism that may need to be aired. But I am concerned when reviewers say this. Pixar’s Brave isn’t a very good movie, but I remember 10 years ago when some reviewers said it wasn’t relatable for them because it was about a girl’s relationship with her mom. I guess I’ll never understand this because some of my favorite characters are male, of a different race or orientation than I, etc. Whatever happened to “the content of one’s character”? With all that being said, I found Turning Red to be a pleasant surprise. I like it quite a bit better than Luca and probably a touch better than Soul. I found Mei rather annoying in the trailers, and to be fair, I think that was intentional. Kids this age are annoying, probably to me more than most people. Kids are loud, awkward, and obsessive. Mei is also just learning that she likes boys, and that’s an uncomfortable time for most kids. This is another facet of the film I found pretty realistic, as is Mei’s dynamic with her friends. Her best friend Miriam (Ava Morse) is another character I really liked, and their friendship is particularly sweet. I was pleased and relieved by what they do with this movie’s bully character, Tyler (Tristan Allerick Chen). This is worlds away from the cringy conflict with Ercole in Luca. In general, Turning Red treats its characters like real people despite its fantastical premise, and that’s what I like to see.

I’m also surprised by how similar this movie’s central themes are to Encanto’s. It must be a coincidence; the films came out less than a year apart and came from different studios. But much like the viral Disney hit, Turning Red concerns itself with intergenerational trauma. Much of the film’s first half explores Mei’s seemingly perfect relationship with her parents, primarily her mom. This part of the movie really hit home for me. Mei’s mother, Ming is well-meaning but extremely controlling, trying to keep her daughter from growing up at all, it seems. She wants Mei to be perfect, avoiding the dangers of boys and loud music in favor of tradition and filial piety. To some extent, Mei perpetuates the problem by avoiding conflict with her mom at any cost. At one point, she even lets her friends take the fall for something she did so she can stay in mommy’s good graces. Ouch. Also like Encanto, the film smartly taps into themes of empathy and the cyclical nature of these traumas. In short, these problems tend to go farther back than just our parents themselves. We get hints and crumbs about Ming’s own mother (who has a really cool character design) and their fractured relationship. I really like that while this film has a predominantly female cast, the male characters are treated with respect and get a chance to shine.

The best examples are Tyler and Mei’s dad, Jin. My favorite scene in the movie was also a significant turning point (haha) in how I felt about it as a whole. While Mei’s mother, grandmother, and aunts are preparing the ritual to remove her panda curse, Jin talks to her about a video he found. Mei made a home movie with her friends, which she says is just stupid and embarrassing. Jin says that, like the red panda manifestation, Mei’s silly side is part of her and that he likes it. He also tells her a little bit about Ming’s panda spirit and their marriage. Ming’s choice of husband was the impetus behind breaking off from her mother for good. Jin usually gives into whatever Ming thinks is right, but he’s more open to listening to what Meilin actually wants and thinks. Ming repeats her own mother’s mistakes and can’t even see it until it’s almost too late.

I also like the designs in this movie a lot more than I thought I would. Domee Shi was inspired by the look of Studio Ghibli’s films. This really shows in Mei’s panda form and the designs of the older characters. The Chinese imagery and architecture are absolutely beautiful, and I love the spirit world Mei enters during the ritual. This felt very much like The Tale of Princess Kaguya or Avatar. The music by Ludwig Göransson is beautiful and unlike any of his other works I’ve heard. Even the pop numbers sung by the likes of Jordan Fisher (To All the Boys I’ve Loved Before, Hamilton) aren’t that bad or obtrusive. I was surprised to see the songs were written by Billie Eilish with Finneas O’Connell, who voices one of the boy band members. 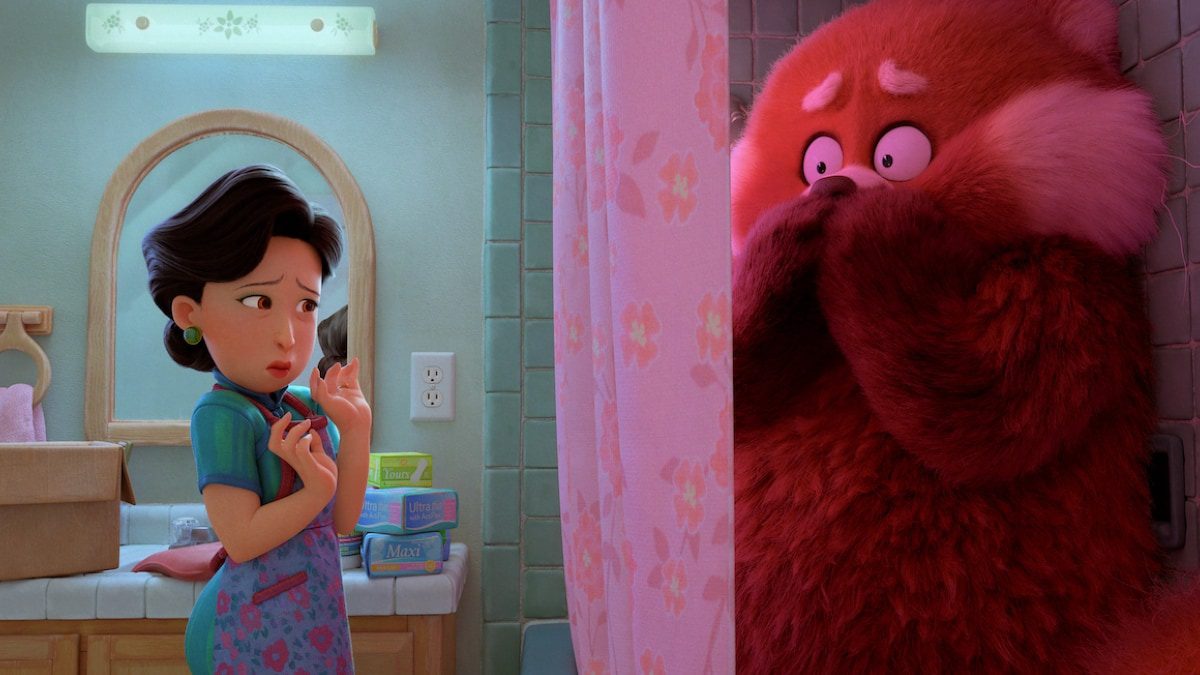 If I have any gripes with Turning Red, it’s one of the lighter Pixar features. There’s nothing wrong with being in touch with your silly side; this film is an endorsement of that. But the emotional scenes in Turning Red aren’t on the level of Coco or Up by any stretch. Likewise, Encanto hits me harder than this. But to be fair, I’ve seen Encanto multiple times, and I like Turning Red better after one viewing than I did Encanto after my first watch. While the pop songs aren’t awful and serve a purpose in the film, they aren’t my thing. I also think the very end could have had a more complete feeling to it. For example, I think of the song at the end of Coco or the final ballroom sequence in Beauty and the Beast as perfect endings. They leave the viewer with an intense feeling of hope and a sense that everything was truly resolved.

Overall, I really enjoyed Turning Red. It isn’t perfect or the best Pixar movie ever, but it succeeds at what it sets out to do. It’s honest, funny, sweet, and thoroughly original. All I really wanted was to enjoy this more than Luca and not be overrun by period references after some things I heard. I got that and so much more, and I would recommend Turning Red to anyone, especially to families and animation fans. It’s a shame this movie is a streaming-only release in the States.

Overall, I really enjoyed Turning Red. It isn't perfect or the best Pixar movie ever, but it succeeds at what it sets out to do. It's honest, funny, sweet, and thoroughly original.

I’m surprised you weren’t reminded of Over the Moon with the spirit world sequences because that’s what I was thinking when Chang’e reunites with Houyi.

That’s a good observation, I loved Over the Moon.