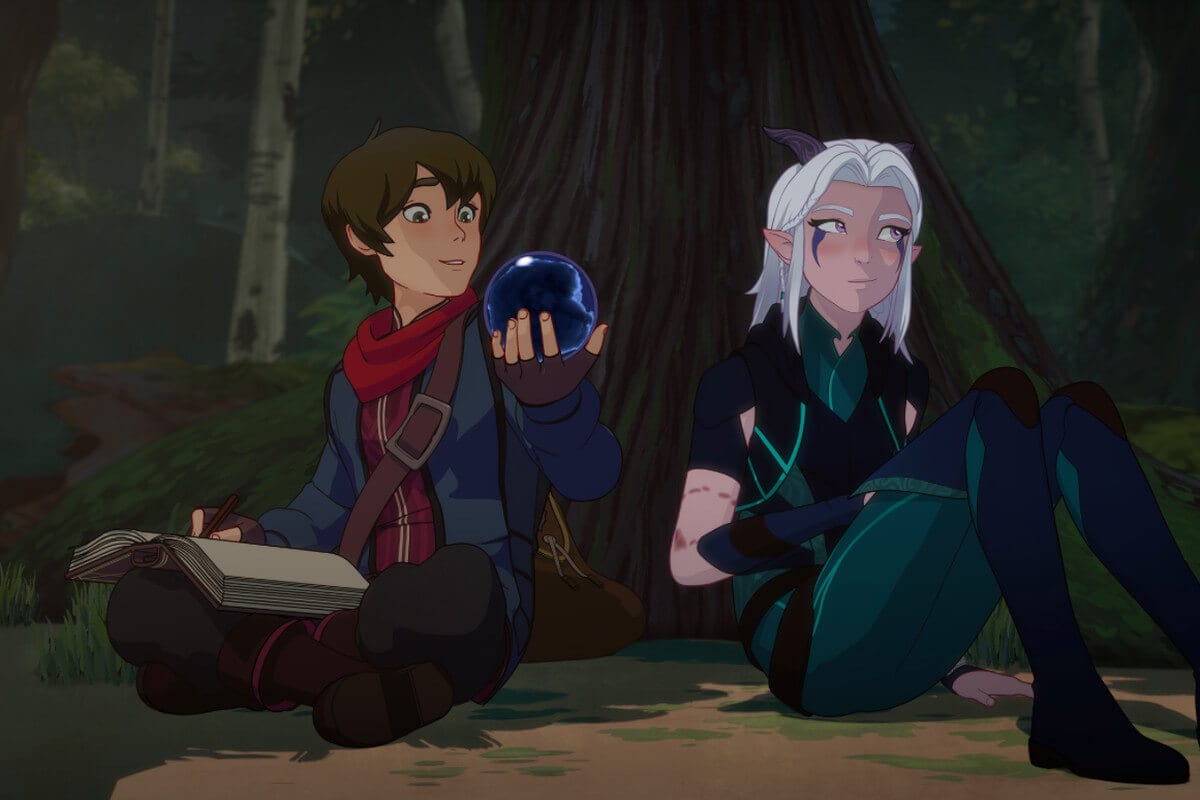 Last Friday, a new animated series called The Dragon Prince hit Netflix. The series was developed for the streaming service by Aaron Ehasz, head writer and producer of the critically acclaimed series Avatar: The Last Airbender.  Avatar writer/director Giancarlo Volpe is also present as a director and producer on The Dragon Prince, with Sokka’s voice actor Jack de Sena voicing a major character. I only heard about The Dragon Prince from some Avatar fan pages, and the latter being my favorite TV series was enough to make The Dragon Prince a must-see. While Avatar was an epic fantasy inspired by Asian religion, philosophy and myth, The Dragon Prince draws from primarily European mythology. Nonetheless, it is very much in the same spirit while being its own show with an original story and cast of characters.

The Dragon Prince begins, similarly to Avatar: The Last Airbender, with a prologue about how the peoples of the world – in this case, humans, elves and dragons – lived together in peace until things started changing. Originally and in nature, magic comes from six primal sources: the Moon, the Sun, the Air, the Sky, the Earth and the Ocean. However, human mages discovered that they could create dark magic by using living things as fuel, and their pursuit of this great evil caused a rift among the races. The current human ruler King Harrow’s trusted mage/advisor, Viren, killed the Dragon King and smashed his egg and heir, pushing the factions into all-out war. Now Harrow and everyone in the human kingdom of Katolis prepares for war as the Shadow Moon Elf assassins come to get revenge for the dragons. It’s up to King Harrow’s sons Ezran and Callum, and Rayla, a Moon Elf who failed her mission to kill Ezran, to save the world when they find the Dragon Prince alive and unhatched. 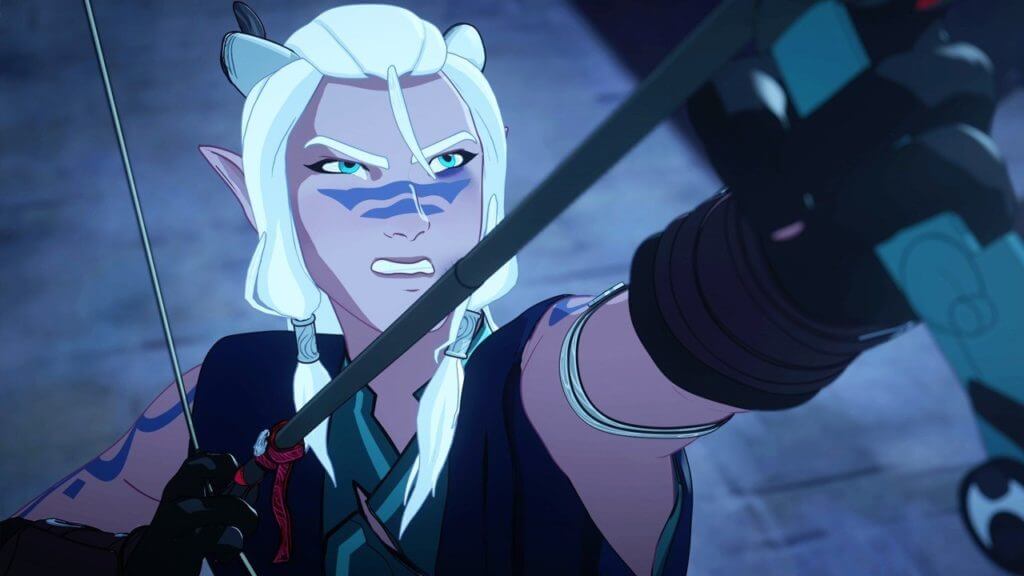 While de Sena is the only performer with whom I was previously familiar, the voice cast does a great job here. I particularly like Paula Burrow’s performance as Rayla, although it’s odd that she’s the only major character with a Scottish accent. They could have given all the Shadow Moon Elves this accent to distinguish them from the humans and other creatures, but as is I found it a little distracting that the other Elves have English and American accents. Sasha Rojen also gives a good performance as the young Prince Ezran, although I do wonder why they got a girl to play him. Jack de Sena is really good, but I knew he would be. Luc Roderique is good as King Harrow, and Jason Simpson is amazing as his mage Viren.

The animation in The Dragon Prince has received some criticism, but I think it’s absolutely stunning. The character designs are wildly original, and there’s so much detail in the backgrounds of every scene. This show also knows when and how to use spectacle to wow the audience. While some find this style of animation distracting, I love how it makes everything look dimensional. I think it’s much more aesthetically pleasing than, say, something like Paradise PD. The music is also very pretty and atmospheric. Composer Frederik Wiedmann is also known for scoring many of the DC animated movies.

The Dragon Prince also has a well-rounded, likable cast of primary and secondary characters. Callum is similar to de Sena’s Avatar character Sokka, in that he’s a protective older brother with a sense of honor and responsibility; also like Sokka, this doesn’t prevent him being the butt of jokes. However, Callum is less of a jokester himself and becomes a novice mage with a lot of potential. While all three leads are sympathetic, Callum feels like the one the audience is supposed to relate to. His fear of inadequacy and desire to help and be accepted by his stepfather the King is the story’s emotional core. I also really like the King’s mage, Viren. This is, at least so far, the most complex character in the series. He’s totally genuine when he says he sees the King like a brother and has intentions to lay down his life to save the King’s. I don’t necessarily find Viren sympathetic, but I love how complex and varied his choices are. I genuinely can’t wait to see more of this character and what happens to him.

I also like Rayla a lot, and Ezran to a lesser extent. Rayla’s sense of duty and guilt over not being able to kill make her an interesting character, and I like that, unlike Runaan, she’s willing to accept and even join the human Princes once she realizes the Egg is still alive. Ezran is likable enough and sometimes funny, but he gets less focus and development. I do like that he comes to realize he has the power to talk to animals, and as he grows I’m sure he might become a more compelling character. I also like Viren’s children Soren and Claudia, and it’ll be interesting to see where their loyalties ultimately lie. Soren provides some good comic relief, and Claudia seems almost like she may be Autistic; she’s very awkward, never understands anyone’s jokes, and obsesses over her magic. Although she isn’t a huge character, I also liked the Princes’ Aunt Amaya and hope to see more of her in future seasons. This is the first animated series I can think of that has a deaf character using sign language. 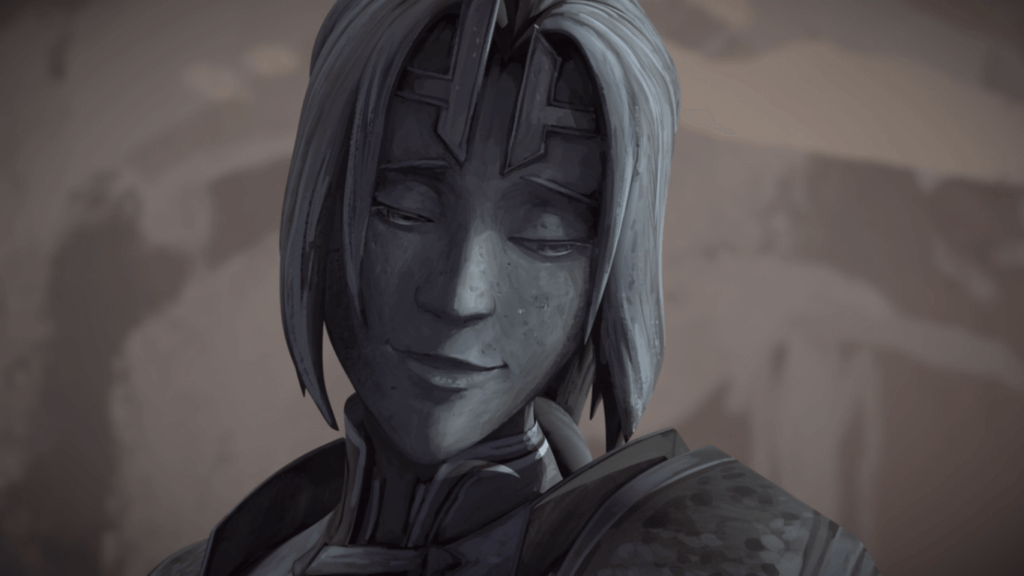 One of the many things that made Avatar: The Last Airbender great was the incredible amount of thought that went into its worldbuilding, and that’s also true of The Dragon Prince. The prologue in episode one is amazing and sucks you in from the start. Lately I’ve been starting a lot of Netflix shows and quitting them early out of boredom; for example, Paradise PD and Voltron. But The Dragon Prince had my full attention and curiosity from the first frame, and never once did I become bored or annoyed with it. Little details like paintings and statues of the Kotalis royal family, and the Elves’ binding ritual, really make the world of The Dragon Prince feel alive and real. This season is titled “Book One: Moon,” and based on that, I assume they’re planning six seasons based on each primal magic source, as they did with the elements in Avatar. That’s exciting, and I can’t wait to see what the significance of each primal source is; the Moon gives the Shadow Moon Elves their power, so I wonder if each season/source will relate to a group or race in this fictional world. A few of Avatar’s big themes are also shared by The Dragon Prince, like different groups of people with different talents needing to work together, the sanctity of life, and that hate and violence can just continue in a vicious cycle. I also find the idea of the King regretting his decisions and having to pay for millennia of his people’s wrongdoings interesting and heartbreaking. There are also a couple of clever references, such as when Claudia is seen reading a copy of a book entitled “Love Amongst the Dragons.” I may or may not have freaked out when the book’s title was briefly on screen.

Overall, I enjoyed The Dragon Prince even more than I thought I would. I was encouraged by the names attached to the project and the fantasy setting, but The Dragon Prince manages to stand on its own legs while still offering little references and jokes to Avatar: The Last Airbender fans. Ehasz and Volpe are definitely up to their usual standards here, and they seem to have an excellent crew and cast backing them up. The Dragon Prince sports beautiful, original animation, lovable characters, lovely music and a dynamite setup and story. From the very first scene, this series is fun, emotional and epic. I really hope Netflix renews for as many seasons as the writers want to do because I’d love to see where the story leads. With time I’m sure it could even rival its writers’ other great series, and I’d say this season is at least on par with Avatar’s first. Regardless of age or demographic, I’d recommend The Dragon Prince to anyone who likes adventure, beautiful animation or some good, old-fashioned fun.

The Dragon Prince - Book One: Moon

The Dragon Prince sports beautiful, original animation, lovable characters, lovely music and a dynamite setup and story. From the very first scene, this series is fun, emotional and epic.