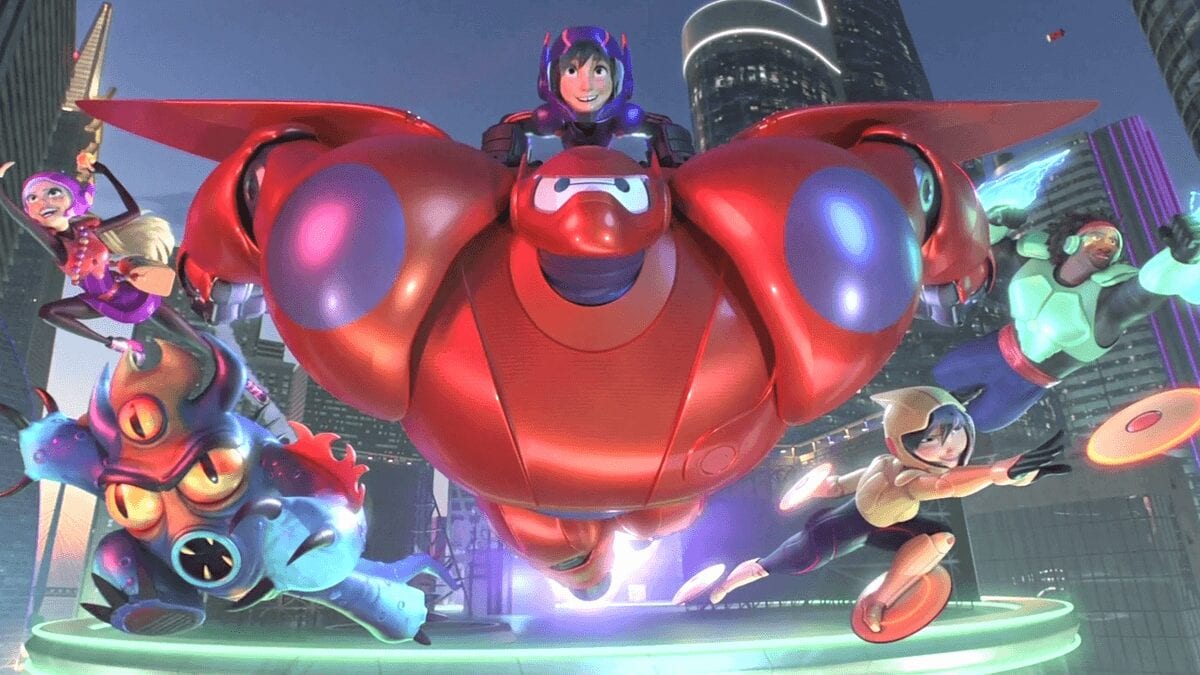 Based on an obscure Marvel comic, Disney Animation’s Big Hero 6 was the mother studio’s first superhero movie. Of course, the acquired Marvel Studios had already proven how lucrative the genre could be, and Pixar’s The Incredibles had demonstrated that the concept could work as an animated family movie. Nonetheless, the comic book world would be quite a departure from Disney’s famous singing animals and beautiful princesses. Big Hero 6 takes place in San Fransokyo, an alternate-history version of San Francisco built after the earthquake of 1906. The original comic was set in Japan with an all Japanese cast, but the animated film seeks to appeal to everyone by representing everyone.

Big Hero 6 starts off with boy genius Hiro in Good Luck Alley, the bad part of town in which lowlifes compete in bot fights. Hiro hustles the seasoned champion Yama, ultimately winning and angering him. His brother Tadashi shows up to save him, but they run right into the police, who arrest them. The boys’ Aunt Cass picks them up from jail, expressing her worry and disappointment by stuffing her face with donuts from her shop. Tadashi tricks Hiro into visiting his college with him under the guise of going back to Good Luck Alley.

At the school, Hiro meets robotics legend Robert Callaghan and Tadashi’s friends, all of them masters of various forms of science. Impressed by their work and aching for a challenge, Hiro enters a science competition to get a chance to attend the school. At the competition, Hiro’s invention, consisting of thousands of mini robots, wows Callaghan and everyone else, and he’s accepted to the university. But things take a turn as the building catches fire and explodes with Tadashi and Callaghan still inside, changing Hiro’s life forever.

Though Big Hero 6 features six heroes, it focuses almost entirely on the relationship between Hiro and Baymax. It’s very well done, and there is genuine emotion when it’s called for. Baymax helps Hiro cope with the loss of his brother, even if it’s not always in the way he wants. Programmed or not, his constant care for Hiro’s wellbeing is sweet, and he teaches Hiro what made Tadashi a hero, and what that means. They also do a good job of making Hiro a believable 14-year-old boy without making him too annoying or unlikable. At times I do find it confusing how Baymax, as a robot, “cannot be offended” but is clearly capable of other emotions like love and concern. It’s likewise strange that when Hiro initially removes Tadashi’s chip, Baymax becomes violent and destructive, but he is later able to give Hiro the chip while maintaining his caring persona. It doesn’t ruin the movie by any stretch, but I always found it weird.

I also really like the supporting cast of Big Hero 6, especially Honey and Fred. I wish we knew more about the friends and other side characters, though. Out of all the Disney animated movies, I’m glad this one got a TV series to expand the story and explore the characters. Honey and Fred seem to have a close friendship, with her being the only one to call him Freddy and the two combining their abilities in combat to create smokescreens and various other chemical reactions. Wasabi seems to have OCD and various phobias and anxieties, which Gogo exacerbates by messing up the organization of his possessions, insulting his driving, etc. Aunt Cass is loving and supportive, but they lean heavily into making her the quirky character, doing silly voices and being very candid about her eating habits. There’s an ongoing misconception that making a female character quirky is feminist, and also that it constitutes a personality.

In fact, there’s a lot of that kind of thing in Big Hero 6: Wasabi is neurotic, and that’s all we know about him. Honey is a kind optimist, and as likable as she is, that’s all we find out about her. Fred is a relaxed nerd, Gogo is an annoying, edgy feminist, etc. These aren’t bad attributes to give someone (other than Gogo), but one or two traits or stereotypes doesn’t make a nuanced character. I think this is largely due to most of the screen time being devoted to Hiro and Baymax, but in a movie called Big Hero 6, you expect more balance. As an aside, Gogo’s catchphrase “Woman up!” is absolutely obnoxious and I’m so glad they dropped it for the TV show. I love this character’s design and suit, but her personality, simple as it may be, is like sandpaper. She only has one scene I like, in which she hugs Hiro to comfort him. This is the only kindness she shows in the film. Of the side characters, Honey and Fred are my favorites despite their limited screen time and opportunities for character growth. Honey is very sweet and smart, feminine and tough, and she’s very tall; I like everything about her. They mix a lot of traits that don’t normally go together in characters in family films to create her. Fred is hilarious, and I just love his antics and the way he wears the school mascot uniform all the time prior to becoming a hero.

The film’s villain, Yokai, was marketed as a mysterious figure enshrouded in shadow. There’s really only two or three people it could be, and one of my friends with whom I saw it in cinemas guessed instantly. This was Disney’s third plot-twist villain in a row, and the trope was already growing stale. It doesn’t help that the surprise isn’t surprising, and this character is barely in the movie anyway. I don’t think he’s completely without merit, though, or at least his alter-ego isn’t.

James Cromwell kills it as professor Callaghan, as he does in all his roles. Callaghan seems like a minor character at first, unless, like my friend, you guessed that he would be the film’s antagonist. Alan Tudyk also plays a fake-out villain in this, like he did in Frozen, and Krei is as useless as Wesselton, if not as annoying. Callaghan’s motivation is good and believable, but I feel like it could have been revealed in a more effective, emotional way. Maybe they didn’t want the audience to sympathize with the villain too much, but the team discovering footage of what happened to his daughter feels forced and disconnected. Even if he had a monologue in which he revealed what happened and his intentions in typical villain style, that could work better. After all, this is a comic book movie; why not have fun with the usual tropes? Despite a great character design, amazing voice actor and decent backstory, Callaghan is another character we don’t really get to know. The conflict between himself and Hiro also represents a personal problem I have with Big Hero 6: I don’t agree with the ultimate moral of the story. Hiro learns that revenge isn’t the answer and that it’s best to save everyone, including Callaghan. I like that Hiro saves Callaghan’s daughter, and the moment where he says, “Someone has to help,” echoing what his brother said as he ran into the school to save Callaghan. This theme is probably one of the film’s greatest strengths in its execution, but personally, I don’t think revenge is always an evil pursuit. But that’s more of a personal thing, and I’ve come to accept that family entertainment always shows revenge as evil and corrupt.

While there are traces of feminist nonsense in the characterization of Gogo, I think it’s notable that Big Hero 6 doesn’t really get political, which I appreciate. After all, this is fantasy; it’s escapism. They basically present a world very much like our own with a hugely diverse population, where different kinds of people work together as friends and teammates. It’s nice to see that portrayed positively without some underlying meaning for once. It’s also interesting to me that the heroes don’t have physical superpowers, but use their scientific knowledge to create various tools and weapons. At first, I was disappointed to learn that Fred is a guy in a suit, Honey’s chemical balls are pre-made and not something she can create with superpowers, etc. However, this works well for the film and these characters. It feels like Big Hero 6 has a very innocent intention of encouraging kids to learn and try different things, and that’s pretty cool.

Big Hero 6 sports some beautiful animation. The design of the city is incredible, and I love all the bright colors and shiny surfaces. The character designs are great and unique among the Disney canon, and the character animation, especially on Hiro when he’s upset, is terrific. The musical score is provided by Henry Jackman, who had previously scored Wreck-It Ralph for the studio. It’s lovely but unobtrusive, never distracting from the main action. The film has a theme song in the form of “Immortals” by Fall Out Boy. I never listened to this group but this is a really good, exciting song that complements the film.

Overall, I like Big Hero 6, but I don’t love it. I admire what the filmmakers were trying to achieve, and for the most part, they succeed, especially in the attempts at inclusiveness and the relationship between Hiro and Baymax. I like most of the other characters, especially Fred, Honey and Callaghan. I just wished we knew more about them, something the TV series is fixing. In some ways the series has made me appreciate the movie more, adding background information and showing us more of the side characters. I would recommend Big Hero 6, and if you like it, I’d recommend checking out the TV show too. Big Hero 6 is no The Incredibles, but it is a sweet, funny, gorgeous film that the whole family can enjoy.

Overall, I like Big Hero 6, but I don’t love it. I admire what the filmmakers were trying to achieve, and for the most part, they succeed, especially in the attempts at inclusiveness and the relationship between Hiro and Baymax. I like most of the other characters, especially Fred, Honey and Callaghan. I just wished we knew more about them, something the TV series is fixing.