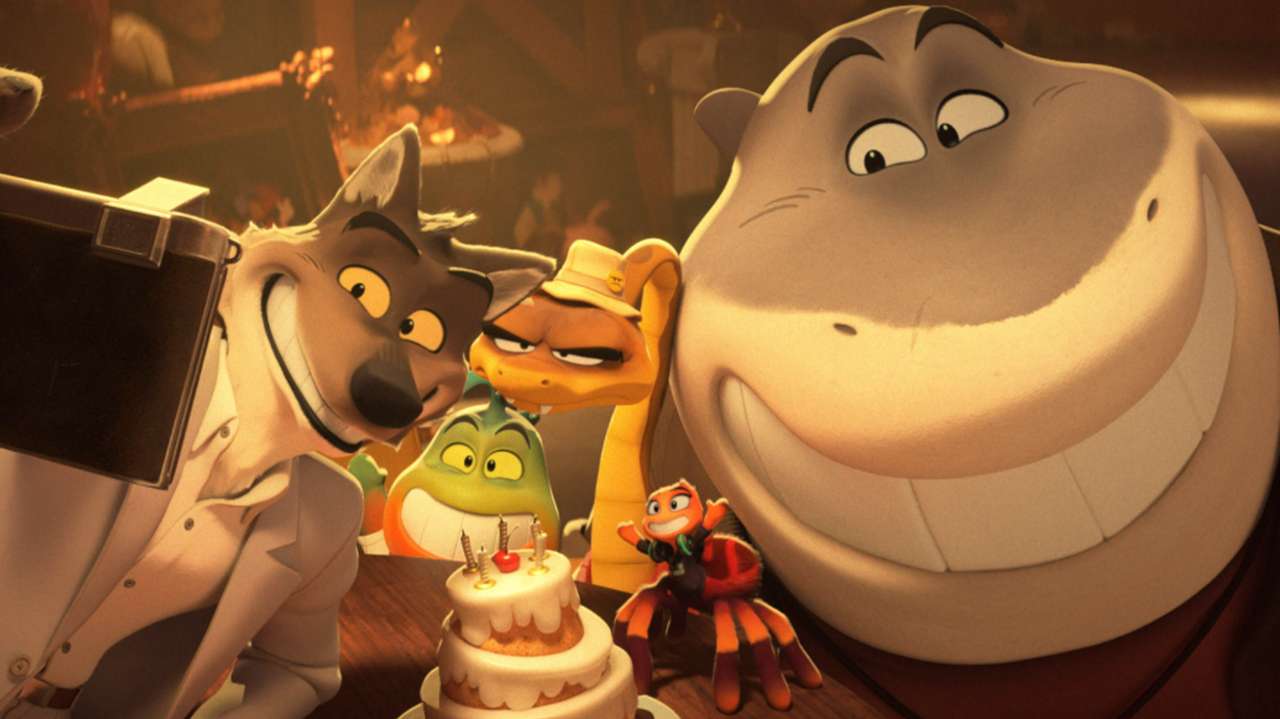 I didn’t know The Bad Guys existed until I saw its theatrical trailer, but I knew right away I had to see it. Over the years, I’ve gone from a DreamWorks hater to a reluctant, cautious fan of their work. The Bad Guys looked like the kind of wacky, inventive story this studio excels at, the cast was beyond impressive, and the fluid, unique animation looked like it was taking cues from Arcane or Into the Spider-Verse. The Bad Guys is based on a series of children’s graphic novels by Australian author Aaron Blabey that follows a group of anthropomorphic animal criminals seeking to clear their names. DreamWorks is no stranger to adapting such material; Captain Underpants, Shrek, and the How to Train Your Dragon franchise are based on children’s books. The movie is directed by Pierre Perifel and written by Etan Cohen (not to be confused with Ethan Cohen). Let’s dive in.

Like its source material, The Bad Guys is the story of a team of misfit criminals who accidentally end up on the path to redemption. Mr. Fox (Sam Rockwell) is a fearless leader and strategist. Mr. Snake (Marc Maron) is his best friend and the group’s resident pessimist. Mr. Shark (Craig Robinson) is the muscle, and Ms. Tarantula (Awkwafina) is a tech guru and master hacker. Mr. Piranha (Anthony Ramos) fights like a demon but has the voice of an angelfish. They’re criminals because they love being bad, and nobody ever gave them the chance to do anything good anyway. That all changes when Mayor Diane Foxington (Zazie Beetz) and philanthropist extraordinaire Professor Marmalade (Richard Ayoade) offer them the chance of a lifetime: a clean slate do-over to become good guys. The cuddly crooks play along for a while, using the opportunity to steal a valuable prize from a charity gala. The only problem is, Wolf starts going soft when he discovers the joy of good deeds and the love and appreciation you get for doing them. Will Mr. Wolf go straight, will this tear the crew apart, and is there perhaps an even greater threat lurking in the shadows? 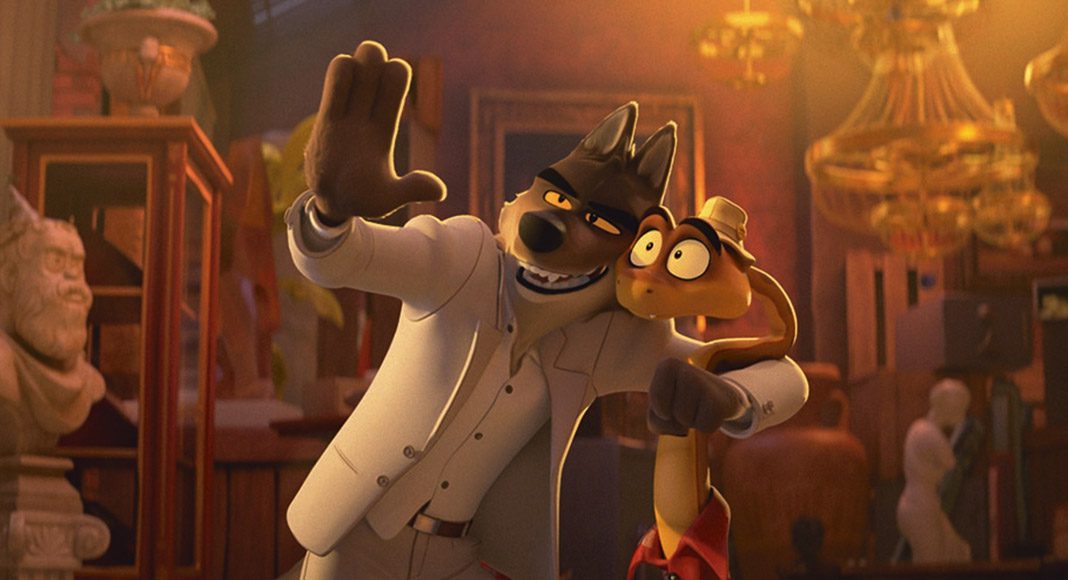 The animation in The Bad Guys is everything I hoped for. The furry fugitives look fantastic; I love their designs, their faces are expressive, and they look great in motion. The animators take the “squash and stretch” of animated characters to the max in The Bad Guys. At times the visual comedy reminded me of Loony Tunes. The way their eyes shift is the perfect mix of exaggeration and expression. The effects work is phenomenal; smoke, fire, water, and dirt are animated with hand-drawn elements like in Arcane or The Mitchells vs The Machines. Hybrids of traditional and computer-generated animation have been all the rage since Into the Spider-Verse hit cinema screens, with earlier examples including Disney’s 2012 short film Paperman. I can’t say for sure, but the movement of the characters’ eyes looks hand-drawn as well. The chase scenes in this movie are incredible, proving yet again that more action movies should be done in animation.

My favorite piece of animation in this film actually comes when the Bad Guys attend the crucial charity gala. As Mr. Wolf hesitates to continue their crime spree and Mr. Snake almost gets caught by the police, Mr. Piranha busts out singing the original song “Good Tonight.” This prompts Mr. Wolf to dance with the mayor and what follows perfectly exemplifies everything I love about animation. The dance choreography in this scene is eye-popping, and the music rhythmic and catchy. The central dance between Wolf and Diane reminded me of Cats Don’t Dance, and that’s always a good thing. Mr. Piranha briefly croons a couple of times in the movie before this, but at this point, I turned to my husband and said, “This scene is why they cast Anthony Ramos in this movie.” Ramos is a rising star following his turns in Hamilton and In the Heights, and I love him both as an actor and singer. I hope his success continues because I’d love to see (or hear) him in more things. The original score and songs in the film are by Daniel Pemberton, who I’ll have to look into. I don’t know anything about him, but this is good stuff all around. The Bad Guys is not a musical and only contains diegetic songs, i.e., the character is singing within the context of the story. 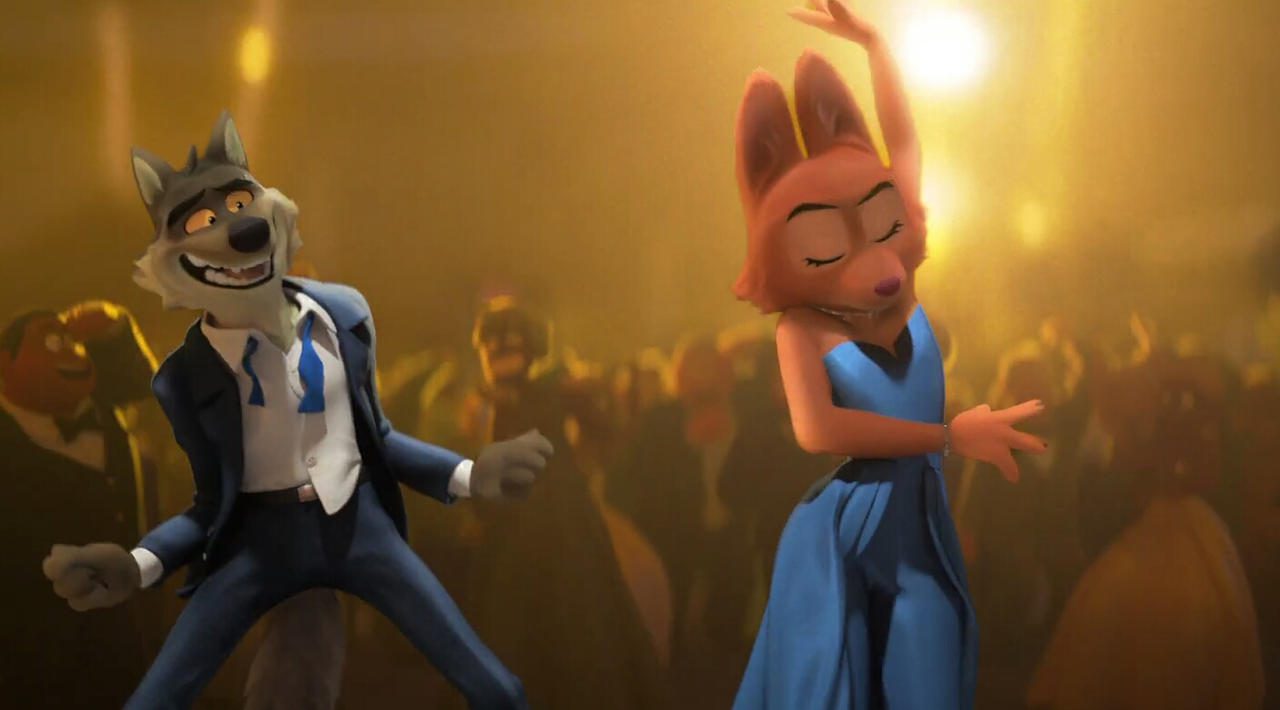 The other stars are excellent in this movie as well; I just had to brag about the guy who’s quickly becoming one of my favorite celebrities. I like Sam Rockwell a lot, but I never expected him to voice an animated wolf. Not only does he sell this role, but I kept forgetting it was him behind the mic at all. He’s funny, charismatic, and the range of emotions he goes through are fully believable. I don’t have much to say about Craig Robinson and Awkwafina as Shark and Tarantula. Robinson is funny, but that’s all there is to his character. Awkwafina is a performer I can only handle in small doses or in dramatic stories like The Farewell. Ms. Tarantula isn’t the funniest character in the movie, but the fact that I didn’t hate her is a testament to the strength of the writing and the decision to focus on Mr. Wolf and Snake. Zazie Beetz is good as the mayor and sells the two sides of her character well. Richard Ayoade is pretty funny as Professor Marmalade, though the twist with his character was much easier to sniff out than the mayor’s.

It probably sounds like I loved The Bad Guys, right? Well, yes and no. This movie has a lot going for it, and it’s mostly in areas I’m the most interested in, like animation and implementation of music. I do have a couple of issues with the movie, though. I don’t like Alex Borstein’s police chief character, and not because she’s an antagonist to the movie’s lead. I don’t like her design or the joke being that she’s big and manly. It’s just an ugly design I didn’t want to look at, and whenever she showed up, it took a little something from my enjoyment. In general, the human characters aren’t as well-designed or charismatic as the animals, and that’s a shame. I get that they’re not the movie’s focus, but why does their skin look so weird? I hate the shape of their teeth and how they get bigger when the characters are angry or shouting. Why give this woman shoulders as broad as Mr. Wolf’s car bumper? Her line delivery isn’t funny, and she’s very much what you would expect out of this type of character. I also saw some plot elements coming at the beginning of the movie or as soon as a character was introduced. I don’t see this as a deal-breaker because I don’t care about being surprised, but they are framed as plot twists, so I think this is a flaw in that context. Other story beats were handled much better, though, and there are some surprises in store if you go into this movie blind like I did.

The Bad Guys is fast-paced, hilarious, visually unique, and a ton of fun. This movie has the best choreography in animation since Encanto and the best (main) character designs since The Mitchells vs The Machines. I’m unsurprised that it knocked the latest Fantastic Beasts down at the box office. It feels like a legitimate step forward for the technology and medium. The main cast, soundtrack, state-of-the-art animation, and humor make this movie a must-see for adult animation fans and older kids. The Bad Guys is by no means inappropriate for families or little ones, but the dialogue is surprisingly sophisticated, and there are some off-color jokes about anatomy and bodily functions. Instead of another Trolls or Croods installment, can we get more misadventures with this gang? I’d love to revisit this cast and their world.

The Bad Guys is a great time at the theater and a milestone for DreamWorks as a studio.

This movie was awesome. I seem to think the animation and character design is very anime like. Look at Turning Red and how some of the characters are animated. There’s one part of Wolf’s running in the gala that reminded me of Lupin III. My favorite designs include Tarantula (very adorable), Shark, Foxington (love the detail of the piercing on her), Piranha and dare I say the police chief. No, she’s not the funniest character, but she was mildly amusing on some note. She reminds me of the police officer from Cloudy with a Chance of Meatballs.

Anyway, I love the gala sequence and can’t stop listening to the song. Oh, and Foxington’s the governor, not the mayor.

I agree, it was awesome, and I see what you mean with the anime influence. American and Western animation has been doing that more and more..thanks for the note about the governor, I’ll get that fixed!

Love that you mention CWACOM, that’s an under rated gem.